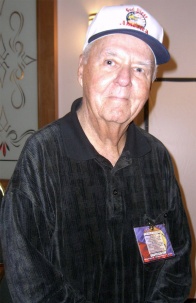 Writer and poet Dorian J. Sinnott shared on Twitter that his grandfather, longtime Marvel Comics artist and inker, Joe Sinnott has died. “He passed away this morning, June 25th,” he said, “at 8:40am at the age of 93. He enjoyed life and was drawing up until the end. RIP, Poppy.”

Joe Sinnott was born on October 16, 1926 in Saugerties, New York. He was one of Edward and Catherine McGraw Sinnot’s seven children, and grew up in a boarding house primarily for school teachers. His love of drawing was inspired by some of the school teachers who stayed in the house, and was influenced by characters such as Batman, Congo Bill and Hawkman.

In 1944, his brother Jack, a member of the United States Army, died. Following this, his mother no longer wanted him to be drafted into the Army and so he enlisted in the Navy instead. He served in Okinawa as a munitions driver during World War II, and was discharged in May 1946. He spent the next three years working in his father’s cement manufacturing plant before being accepted into the Cartoonists and Illustrators School (since renamed the School of Visual Arts) as a result of the G.I. Bill. Another three years later, Sinnott had his first solo professional job which was for ‘Trudi’ in humor comic “Mopsy” #12. It was two weeks after this that he married Betty Kirlauski, who he was married to until her death in 2006. Together, they had four children, Joe Jr., Linda, Kathy and Mark.

Tom Gill, who was an instructor at the Cartoonists and Illustrators School at the time employed Sinnott as his assistant, which meant he spent nine months drawing backgrounds for on the Western movie tie-in comics that Gill worked on for Dell Comics. Gill, and by extension, Sinnott’s work wasn’t limited to Dell Comics though, as they were also employed by Atlas Comics, the predecessor of Marvel Comics. This existing relationship provided the foundation for Sinnott to continue his career.

In 1951, he met with Stan Lee, who was Editor of Atlas Comics at the time, and given a script instantly. Sinnott’s first published work not attached to Gill was either ‘The Man Who Wouldn’t Die’ in “Apache Kid” #8, or ‘Under the Red Flag’ in “Kent Blake of the Secret Service” #3. (The uncertainty regarding his first work is rooted in the lack of creator credits given in comic books at the time.) From here, Sinnott continued to draw for the company, including comics like “Marvel Tales,” “Battle” and “Frontier Western.” In 1957, Atlas released most of its staff and freelancers due to economic difficulty, and Sinnott found work doing commercial art, as well as ghosting for some artists at DC Comics.

It was in the 1960s that Sinnott first collaborated with Jack Kirby, by inking his pencils on ‘Doom Under the Deep’ in “Battle” #69. In 1962, following multiple collaborations with Kirby, Sinnott inked his first Marvel superhero comic, “The Fantastic Four” #2, which was pencilled and co-plotted by Kirby. It marked the beginning of Sinnott’s most celebrated work, inking on “Fantastic Four” for almost every single issue until 1981. His inkwork featured in almost all of Marvel’s major titles at the time, including “The Avengers.” In 1992, Sinnott largely retired from comics, limiting his comic book contributions to cover work and commissioned artwork, while continuing to ink “The Amazing Spider-Man” Sunday strip instead. His work on the “Amazing Spider-Man” strip continued up until March 2019.

His career earned him recognition by multiple comic book award bodies. He was awarded with the Inkpot Award in 1995, and given the Inkwell Hall of Fame Award in 2008: he was also named a Special Ambassador by the same awards. In 2013, he was given the Will Eisner Hall of Fame Award.

Sinnott is survived by his three living children, Joe Jr., Kathy and Mark, and his grandchildren.

Newsarama reports legendary “Batman” writer and editor, Dennis “Denny” O’Neil, has died at the age of 81. According to his family, he passed away at home, from natural causes, on the night of June 11.Dennis J. O’Neil was born in St. Louis, Missouri on May 3, 1939. He studied English literature, creative writing and philosophy […]

Sportswriter and cartoonist Murray Olderman, whose caricatures of sports figures were featured attractions in newspapers across America for decades, has died at the age of 98, The New York Times reports.A journalist, columnist, and caricaturist whose pen captured the sports world in newspapers for more than 60 years, the advent of television and the digital […]