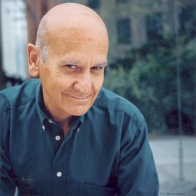 Juan Giménez
Argentinian newspaper La Nación reports comic book artist Juan Giménez has died at the age of 76 from COVID-19 (the novel coronavirus). The artist, best known for his work on “Heavy Metal” magazine and Alejandro Jodorowsky’s “The Metabarons,” had been undergoing intensive care since he was diagnosed with the disease on March 22. He is only the third person in the city of Mendoza to have died from COVID-19.

Juan Antonio Giménez López was born in Mendoza on November 16, 1943. He studied at the National University of Cuyo’s School of Arts and Design (located in the city), and then at the Faculty of Fine Arts in the University of Barcelona, Spain. He returned to his homeland and got his start creating comics at the publishing houses Colomba and Record, but eventually turned to advertising and animation. In his official biography (written in Spanish), Giménez said working in advertising helped him learn to “tell a story in a short time and calculate to the millimeter the assembly and planning of each scene.” 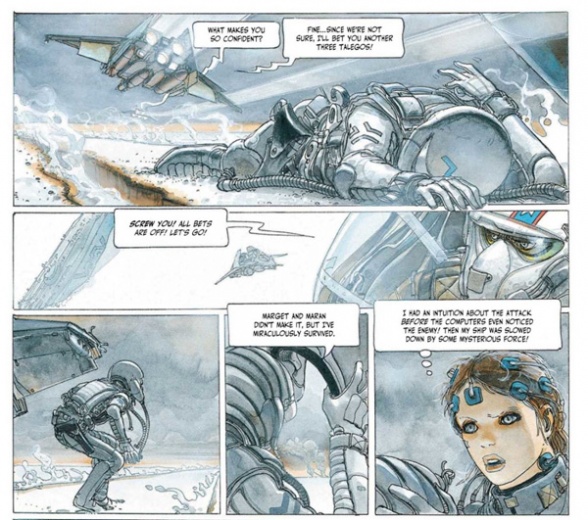 Art from 'The Fourth Power'

Giménez moved to the Costa Brava, Catalonia, in the 1970s, where he primarily drew war and sci-fi comics for Spanish magazines like Zona 84 and Comix Internacional, as well as Italian ones like LancioStory and Skorpio. He gained greater attention during the ’80s, writing and illustrating the French series “Leo Roa,” which followed the comedic misadventures of a journalist in the far future, and then with “The Fourth Power” (“Le Quatrième Pouvoir“), the saga of Exether Mega, a military pilot who becomes a person of interest during an interplanetary war. He also designed the “Harry Canyon” segment of 1980’s Heavy Metal movie.

He and writer Alejandro Jodorowsky launched “The Metabarons” (“La Caste des Méta-Barons“) at Humanoids in 1992. A prequel to Jodorowsky’s “The Incal,” the series told the generations-spanning story of a dynasty of cybernetic warriors, as they “struggle[d] to overcome the forces amassed against it in a galaxy corrupted by greed, power, and terror.” The comic concluded in 2003, and Giménez subsequently resumed work on “The Fourth Power” series. 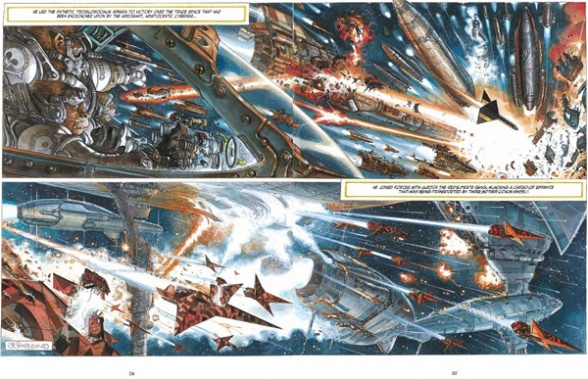 During the early 2010s, Giménez created the sword-and-sorcery trilogy “Moi, Dragon” (“Me, Dragon”), and the video game satire “La Dernière Vie” (“The Last Life”) at Le Lombard, as well as a new space opera, “Segments,” with writer Richard Malka at Glénat. Among his more recent work was the cover for Marvel’s “Star Wars: Darth Vader” #25, the final issue of Kieron Gillen and Salvador Larroca’s run in 2016. Besides comics, he created covers for novels and records, storyboards for films, and concept art for video games.

Giménez won many awards over his lifetime: he was voted Best Cartoonist by 1984 and Comix Internacional readers in 1983, ’84, ’85 and ’90, and was awarded Best Cartoonist at the Barcelona Comic and Illustration Salon in 1984; the Yellow Kid Award at the Lucca International Comic Fair in 1990; and the Bulle d’or in France in 1994. He has been the subject of many exhibitions around the world, including one in the prestigious Centre Pompidou in Paris in 1997. He was named an Illustrious Citizen by the city of Mendoza in 2014. Numerous creators, and Humanoids and Heavy Metal, have paid tribute to Giménez: Francesco Francavilla wrote, “He was a early fave of mine (read his stories in Eternauta, LancioStory, Comic Art etc) and def an inspiration for anything Fantasy and SciFi. Gonna miss him greatly.”

Writer Alan Brennert shared on Facebook that his friend, writer and editor Martin Pasko, died of natural causes on Sunday, March 10. He was 65. A veteran of both comics and television, Pasko served as story editor on Batman: The Animated Series, for which he received a Daytime Emmy Award for Outstanding Writing in an […]

Richard Sala, the creator of “Delphine,” “Cat Burglar Black,” and “Evil Eye,” has passed away at the age of 61.He was known for his uniquely surreal and stylistic art across a swathe of horror-centric, evergreen titles.According to his professional profile, Sala grew up in Chicago with “a fascination for musty old museums, dusty old libraries, […]