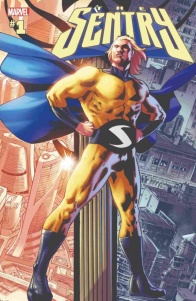 Bob Reynolds, also known as the Sentry, will be getting his own title this summer, as Jeff Lemire and Kim Jacinto will tackle “The Sentry” as part of Marvel’s ‘Fresh Start’ initiative. Spinning out of the pages of Donny Cates’s “Doctor Strange” #383, the Sentry has returned to the Marvel Universe and Jeff Lemire couldn’t be more excited to write the series. “I absolutely loved the original Sentry series by Paul Jenkins and Jae Lee when it first came out, so I jumped at the chance to write the character,“ he told ComicBook.com. The series will pick up a few months after his reintroduction in “Doctor Strange” and will see the character rejoin the Marvel Universe at large. Lemire also says he’s a character that’s consistently undermined by his dark side and “self-doubt.”

Lemire is no stranger to characters with a dark side. Just look at his recent run on “Moon Knight,” in which he forced all of Marc Spector’s personalities to face one another in a battle for his sanity. Though Lemire is careful to say “’The Sentry’ is not a retread of what I did in ‘Moon Knight.’ But I did want to create a story filled with mystery and psychological depth like I did with ‘Moon Knight.’” The Sentry’s dark side is a little different as it takes the form of the Void, an evil entity that tries to destabilize all the good the Sentry does. “You cannot have the Sentry without the Void,” Lemire said. He also said he “was very conscious of was not simply retelling the same stories that had been told in the past with Sentry and Void.” Currently, Doctor Strange has the Void locked up, but Lemire hints that its shadow will loom over the character throughout the series.

Kim Jacinto will handle art duties on the book describing it as “the traditional Sentry look but we have some surprises in store too.” It seems that the book will see the Sentry traverse different universes, and thus a clean style as opposed to a dark and gritty style. Of the book, Jacinto says “drawing different realities are fun and sometimes fun takes out the challenge.”

“The Sentry” #1 is the latest book in a slew of books that encompass Marvel’s ‘Fresh Start’ and will be in comic book stores this June.