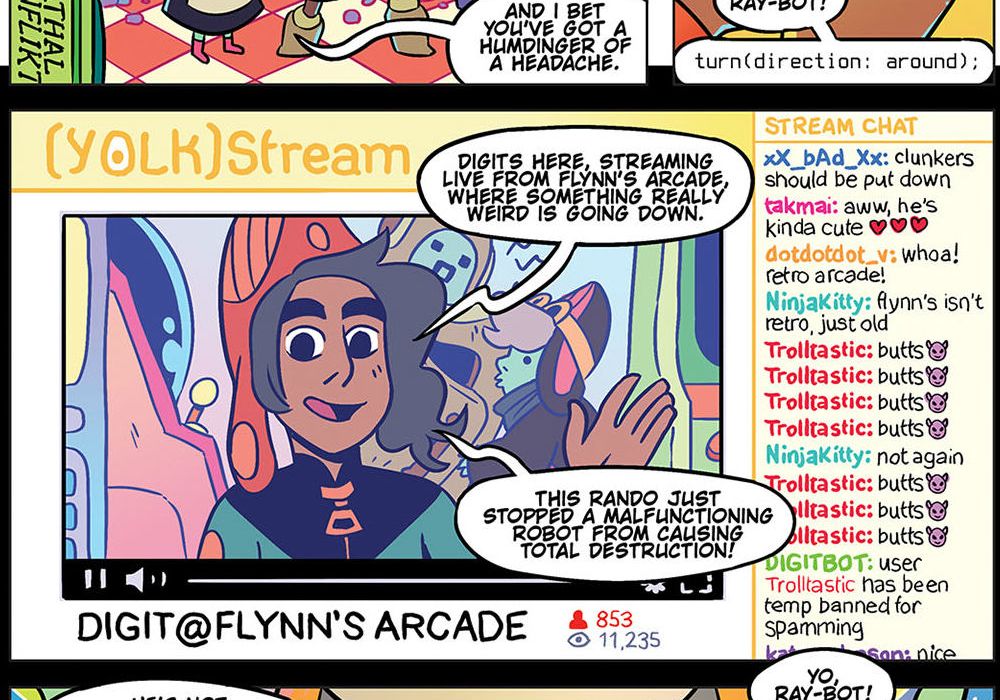 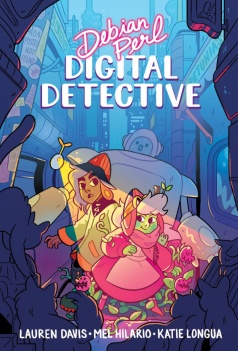 Set in the formerly bustling technological hub of Megalopolis, “Debian Perl” will follow the titular technomancer as she uses her legacy programming skills to outsmart the city’s “Egg-heads,” who can’t tell a class from a function. But while the five-book series sells itself as a high-concept adventure, it’s also designed to teach younger readers the basics of coding, algorithms, algebra, and problem solving.

“Technology grows more and more magical each year, and I want younger readers to realize they have access to that magical technology – that they can harness it, control it, and create new things with it,” said “Perl” co-writer Lauren Davis, in a Lion Forge-provided press release. “It’s been exciting to work with Lion Forge because they’ve shared our vision of making the magical more accessible.”

Co-writer Mel Hilario and artist Katie Longua will join Davis in telling Perl’s story, but comic books may not be where the on-the-nose named detective’s adventures end. Know Yourself produces a number of other products aimed at encouraging children not only to read, but to build their social awareness and self-confidence.

“Yes, we want kids to learn how to code, but we also want to give them a new world to explore, characters to identify with, mysteries to solve, and present social messages to contemplate,” said Know Yourself’s Creative Director, Samuel Sattin. “Additionally, we have a lot of fun ideas and hope to expand beyond the scope of the books themselves.”

In their exclusive announcing the new title, The Hollywood Reporter showed off some additional “Perl” preview pages and provided details on other titles coming from Lion Forge in 2019, including “Fast Enough: Bessie Stringfield’s First Ride,” “Glint,” and “The Wizerd.” For more details on those titles, head on over to The Hollywood Reporter. Otherwise, read Lion Forge’s full press release on “Debian Perl: Digital Detective,” which will release in Summer 2019, below.

ST. LOUIS — Days before the opening of the exhibit hall at Comic-Con International 2018, Lion Forge reveals a new series for middle-grade readers developed in conjunction with computer scientist and entrepreneur Tim Howe’s Know Yourself, the Oakland, California–based public benefit corporation dedicated to self-literacy in early education.

“Know Yourself was founded on the belief that character and story are essential to helping kids and teens learn about themselves and the world around them. We could not be prouder to have Debian Perl and her friends meet the world and start helping readers on this journey. And we could not be more excited to be working with Lion Forge, the world’s most innovative comic book publisher, whose philosophy of cultural diversity and comic books for all we wholeheartedly share.”—Tim Howes, CEO

Megalopolis used to be the city hub for all the makers, doers, and dreamers. It was a better time according to Debian Perl, a technomancer known for her out-of-date computer programming skills. Now the city streets are filled with “Egg-heads,” those in thrall to the ease and simplicity of new technology as opposed to Debian’s way of doing things. Digits is one of those Egg-heads. She is a young social media guru and knows her way around all the newest, latest technology.

Debian and Digits cross paths when they both stumble across a one-hundred-year-old lost robot named Ray-Bot. They soon learn that Ray-Bot’s CPU was suspiciously overclocked, leaving him unable to perform basic functions and commands. To find out where the robot came from, Debian must teach Digits everything she knows about computer coding and programming. Along their journey to bring Ray-Bot home, they begin piecing together the mysterious puzzle about his malfunction and uncover some sinister secrets.

“Debian Perl: Digital Detective” is a five-book series in which middle-grade readers will join Debian and Digits on mystery adventures all while building practical knowledge of coding, algorithms, algebra, and logical problem solving.

“I love working with Lion Forge, and co-developing the Debian Perl project with them has been so exciting. The people working on this book (writers Mel Hilario and Lauren Davis, artist Katie Longua, our tech-advising CEO, Tim Howes) are putting so much thought and study into every page. With Andrea Colvin and myself overseeing, we hope to introduce something truly innovative for younger audiences. Yes, we want kids to learn how to code, but we also want to give them a new world to explore, characters to identify with, mysteries to solve, and present social messages to contemplate. Additionally, we have a lot of fun ideas and hope to expand beyond the scope of the books themselves.”—Samuel Sattin, Creative Director

“Know Yourself does amazing work creating content that is really fun and also really educational. They are the perfect partner for Lion Forge in crafting exciting graphic novels that also teach concepts of coding and computer science to kids.”—Andrea Colvin, Editor-in-Chief, Lion Forge Comics

“I’ve drawn my whole life because of the comics I grew up with. They were an incredibly important part of my childhood and shaped the career I have today. It’s an honor to work together with Lion Forge and get the chance to have that impact on kids growing up now.”—Katie Longua, artist, Debian Perl

“When I was growing up, I wanted magic to be real because so many of the stories that I loved were about magic. Technology grows more and more magical every year, and I want younger readers to realize that they have access to that magical technology—that they can harness it, control it, and create new things with it. It’s been exciting to work with Lion Forge because they’ve shared our vision of making the magical more accessible.”—Lauren Davis, co-writer, Debian Perl

“When I was younger, I escaped into books; today, I see them as not just an escape but as a means of transport—both as joy and journey.  Stories make things significant, especially when a reader can find something of themselves or their own lives in the characters. In a way, fiction is the clearest path to truth.  Kids can see that.  Writing for them keeps me from losing the kid in myself.”—Mel Hilario, co-writer, Debian Perl

Debian Perl is created in partnership with Know Yourself, a company dedicated to helping kids learn more about themselves and the world around them. This incredibly entertaining new series combines logic, puzzles, and learning with page-turning, action-packed, mystery-adventure stories. The first volume in the series is due to arrive in summer 2019.

About Know Yourself:
Know Yourself is an Oakland, California-based educational fun company dedicated to teaching kids about themselves and the world around them. Through toys, games, comics, and workbooks, Know Yourself takes kids on a journey of self-discovery that will last a lifetime. Our tools are science, story, character, and fun, and our ambition is to bring our message of self-discovery to every child, regardless of background or circumstance.

About Lion Forge Comics:
Lion Forge strives to publish comics for everyone to enjoy, regardless of gender identity, ethnicity, or cultural background. The original graphic novel Andre the Giant: Closer to Heaven was nominated for three Glyph Awards, as well as the Dwayne McDuffie Award for Diversity, and Lighter Than My Shadow was voted the 2017 Graphic Novel of the Year by Amazon. Lion Forge Comics includes the Roar imprint for young adults, the Caracal imprint for middle-grade aged children, and the CubHouse imprint for early readers. It is also home to the Magnetic Collection of premium and critically acclaimed comics and graphic novels, boasting multiple Eisner Award nominees. Across multiple imprints and formats that include licensed properties like DreamWorks Voltron Legendary Defender, original works from top independent creators, and the original and all-inclusive Catalyst Prime superhero universe, Lion Forge publishes something for every level of comic book fan, young and old.