At The Hollywood Reporter, Lion Forge have announced “r(ender);,” a supernatural ten-issue maxiseries written by Leah Williams (“Adventure Time Comics,” “X-Men Gold Annual”), with art by Czech newcomer Lenka Simeckova. The book tells the story of detective Natalie Bixel, who works with Emie Ocampo, a photographer who can share the last images from the eyes of the dead, to solve a series of murders in the city of New Delith. 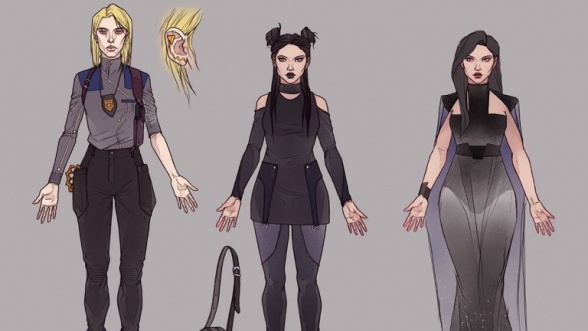 “I joke about ‘r(ender);’ being ‘X-Files, but lesbians and magic’ or ‘seapunk tech noir,’ but really it’s a cyberpunk neo-noir story that takes place on the fraying edge between magic and technology,” Williams told the Reporter. She added it’s “the one story I’ve been desperately hungry to tell ever since I was a teenager. The main character’s unique magical prowess is literally a dream I had when I was 14, and just never stopped thinking about.”

This is the first creator-owned comic by Williams. Initially a blogger for The Atlantic, Oprah Magazine, and Salon, she published her first young adult novel – The Alchemy of Being Fourteen – in 2015, and soon entered the world of comics, contributing stories to anthology titles like Marvel’s “Secret Empire: Brave New World” and “The Totally Awesome Hulk” #1.MU. She is currently writing a sequel to her first novel, and the upcoming “Barbarella/Dejah Thoris” miniseries at Dynamite. Simeckova, meanwhile, has gained an online following for her often Gothic, eerie artwork.

“r(ender);” #1 will be released in April 2019. Until then, head on over to The Hollywood Reporter for more from Williams and Lion Forge editor Jasmine Amiri, and additional concept art from Simeckova.