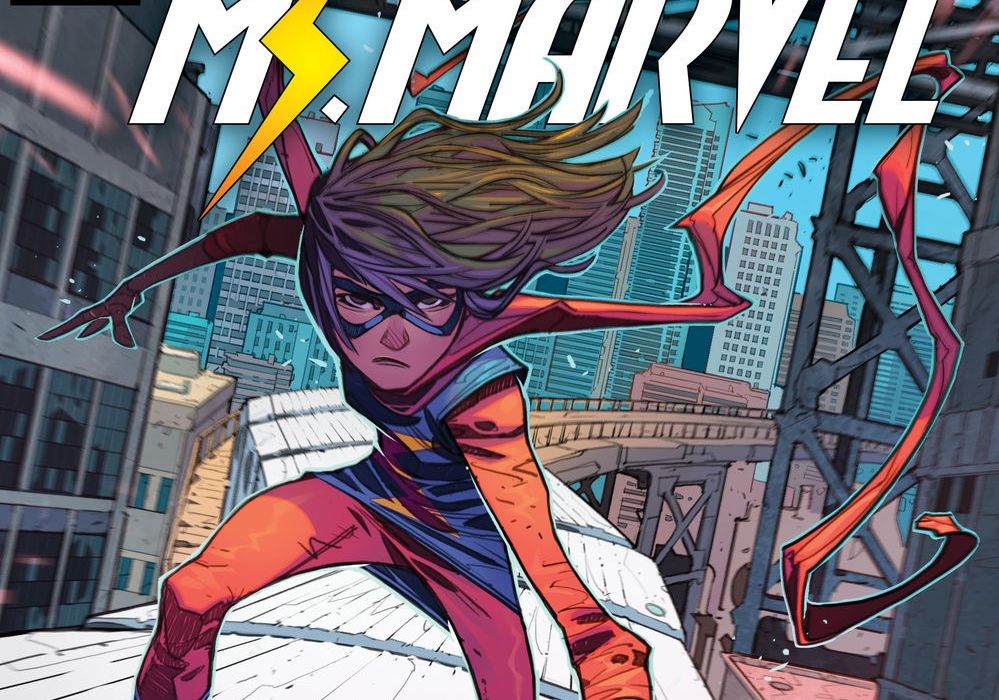 A friend of mine theorizes that every decade gets a superheroic everyman. A hero of the people who represents their generation. In the 60s we had Peter Parker. In the 90s there was Jack Knight. And today, we’ve got Kamala Khan, a good kid from Jersey City, struggling to do the right thing. The young Ms. Marvel is passing an important threshold in a young hero’s life. Though she was created by G. Willow Wilson, who wrote Kamala’s series for 50 issues, the torch has been passed to rising Marvel star Saladin Ahmed. Ms. Marvel is taking her first steps into a larger world. How will she fare under a new creative team? The answer is complicated. 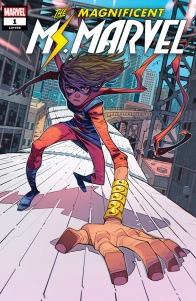 Featuring action-packed extras including a Cover Gallery, Script, Inked And Color Pages and Character Designs! MS. MARVEL IS BACK! But it’s not business as usual in Jersey City. Aliens are wreaking havoc in Kamala’s corner of the world, and they seem weirdly interested in Ms. Marvel…and her family. Eisner Award–winner Saladin Ahmed (BLACK BOLT, EXILES) and rising star Minkyu Jung (Batgirl, Nightwing) take the reigns of one of Marvel’s most beloved new characters! You won’t want to miss this shocking start of a new era!

Let me start off by saying that Ahmed finds Kamala’s voice effortlessly. There’s no way you’d mistake her for anybody else. She’s got her big heart, she’s still kind of flaky, and she quips in a style that’s all her own. I was especially taken with an early exchange with a hapless bystander. His store has been trashed by Ms. Marvel’s fight with a skullfaced goon. He ain’t happy about it, and he lets Ms. Marvel know. “I was gonna help you clean up, you don’t have to yell at me!” she shouts back. A perfect moment for your friendly neighborhood Ms. M. Totally willing to help, but raw and insecure enough that she’ll yell at you for calling her out. That’s how we do it in Jersey babee!

Not enough can be said about Minkyu Jung’s pencils. The whole art team does a great job, but Jung has the nearly impossible task of turning something familiar into something personal. The whole style falls nicely in line with what Adrian Alphona and Nico Leon did before, but with slightly less cartoonish proportions. Faces still have that Saturday morning appeal, but everyone looks a little bit… taller. People have longer legs, narrower shoulders, what they’ve lost in sheer bombast, they make up for in recognizable familiarity.

But not everything is perfect in Chilltown. Ahmed comes to comics from prose and poetry. You wouldn’t know it from some of his early books. “Black Bolt,” “Exiles,” and his creator-owned “Abbott” were masterfully scripted. Less impressive was his debut on “Miles Morales: Spider-Man,” and “Magnificent Ms. Marvel” shows the signs of a good writer trying to figure out how to be a good comic writer.

“Magnificent Ms. Marvel” opens with a framing narrative. It’s not very well executed, and throughout the issue feels utterly superfluous. There’s a far off alien father telling his son a bedtime story about the Destined One. It’s corny, doesn’t directly connect to the action, and at time is terribly distracting. It’s especially jarring before and after a scene where Kamala recites her origin story to her friend Nakia. Not only is this a big waste of time- it’s just talking heads longwindedly playing catch up for three pages- it forces a framing narrative into another framing narrative! It’s a lot of unnecessary business. That’s almost a quarter of the first issue slogging through stuff that could have fit into a few panels… or be taken out altogether. It’s possible, even likely, that some of this framing stuff will pay off, but it doesn’t in this issue, and it drags.

It’s fortunate that Ahmed is paired with such a crackerjack art team. The whole scene of Kamala walking and talking with Nakia uses dynamic angles and deeply expressive faces to keep the story from slowing to a complete halt. We’ve also got to acknowledge Ian Herring, who’s color work is nothing short of extraordinary. Herring uses moody lighting to go from a sunny day, to a shadowy house, to a brightly lit living room, to an impressionistic blast of mauve and fuchsia when emotions start running high. It’s that subtle escalation from good movie set lighting to Vincent van Gough insanity that makes Herring’s work so noticeable and welcome. The art team, including inker Juan Vlasco, keep the slow parts moving and when the action turns up, they sparkle.

The thing is, this is a first issue, and the most important thing a first issue needs is a hook. It was something that Ahmed struggled to find in his first “Miles Morales” issue, but fortunately he has a good one here. G. Willow Wilson did a great job at defining what a Kamala Khan adventure feels like- it’s weird! Kamala’s first villain was after all, a cockatiel Thomas Edison. Remember when she fought the living video game? So, the strange alien creatures melting into ectoplasm seems totally appropriate, and I won’t spoil the final twist, but it was as good a “to be continued” as you could expect!

So those worried about Kamala can be assured that she is in good hands. Ahmed has written some genius comics, and though there seems to be a learning curve when it comes to writing low-concept monthly superhero adventures, he’s got it where it counts- deep compassion for the character and her story. The art team does a great cover of the previous style, and their steady hand will anchor the book in the months to come. “Magnificent Ms. Marvel” has a ways to go, but I fully expect it to live up to its adjective!