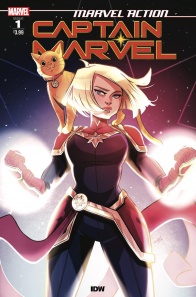 According to an exclusive at io9:

Carol Danvers comes down to Earth for some much-needed downtime with her good friend Jessica Drew, but the two heroes are forced to spring into action when they learn that all of Manhattan’s bodegas are being overrun by flerkens, dimension-hopping aliens that resemble normal cats.

Normally, Captain Marvel gets along just fine with the furred, tentacle-mouthed beings, but their new attempt to oust New York’s population of bodega cats is an injustice Carol simply can’t abide by.

The first issue of “Marvel Action: Captain Marvel” hits stores in August. IDW has yet to release information on how long the series plans to run, but to paraphrase a common saying, it’s not so easy herding cats. Who knows how long it takes to herd flerkens?