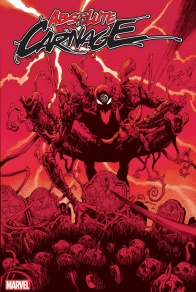 As C2E2 begins, Marvel have announced a few new series at the Diamond retailer event, all starting this summer. First up, Donny Cates, Ryan Stegman and Frank Martin will unleash “Absolute Carnage” on the Marvel Universe: described as the epic event of the summer, the story begins in May’s Free Comic Book Day issue of “Spider-Man/Venom” #1, but things will really kick off in August when “Absolute Carnage” #1 is released.

In a video announcement, Donny Cates said “Cletus Kasady is back, and he is deadlier than he’s ever been. ‘Absolute Carnage’ encompasses every single character who has ever worn a symbiote and every symbiote that has ever been, going all the way back to when Peter found the black suit. Going from there to ‘Maximum Carnage’ to ‘Venomized’ to everything… everyone is a target.”

Secondly, writer Al Ewing will bring back the “Infinity Warps” mash-up characters introduced as part of “Infinity Wars,” for a six-part story that will take place across six Annuals starting in July. Each Annual will focus on a specific “Infinity Warps” character: so far, Soldier Supreme, Weapon Hex, Arach-Knight, Ghost Panther, and Iron Hammer have all been confirmed.

It was also announced that Mark Waid and artists Javier Rodriguez and Alvaro Lopez will tell a definitive version of the “History of the Marvel Universe,” as part of the publisher’s 80th anniversary. The six-issue series will reportedly tell “the entire history” of the Marvel Universe, however, no release date has been given.

Finally, Kurt Busiek and Alex Ross will reunite for a new “Marvels” one-shot to mark the series’ 25th anniversary. Little is known about the one-shot, other than it will take place after the original series, and will be collected with it in future editions of the book.

Writer Alex Paknadel is busy at the moment alongside the other writers of White Noise Studios (Ram V, Dan Watters, and Ryan O’Sullivan) who are taking comicdom by storm. We had a chance to talk with Paknadel, and artist Martin Simmonds, many months ago about the now critically-praised “Friendo,” that just ended over at Vault […]

Robert Venditti has quite a few projects coming out at DC Comics at the moment, all dealing with history in unique ways. There’s “Hawkman” with artist Bryan Hitch where Venditti is revitalizing the history of the Carter Hall. There’s “Freedom Fighters” with artist Eddy Barrows where we’re getting an alternate history in the DCU where […]

This interview first appeared Saturday, April 6th, 2019, on the most recent episode of the Make Mine Multiversity podcast, which you can find here.Writer Jeremy Whitley is in his second volume now with the new Wasp in the Marvel Universe, Nadia van Dyne telling stories about science, empowerment, mental illness, hope, and so many other […]