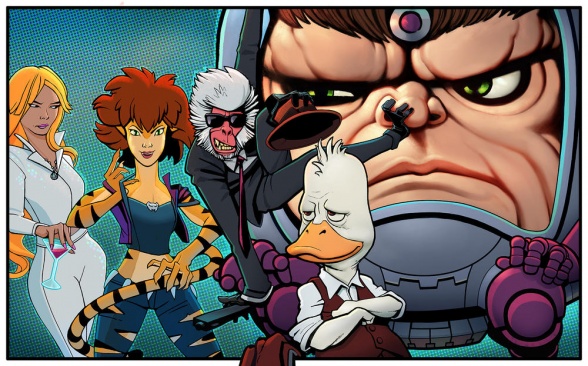 M.O.D.O.K. will be written and executive produced by Jordan Blum (American Dad!) and actor Patton Oswalt (Agents of S.H.I.E.L.D.), and it will follow the literally big-headed supervillain as he “struggles to maintain control of his evil organization [A.I.M.] and his demanding family.” M.O.D.O.K. (Mental/Mobile/Mechanized Organism Designed Only for Killing, real name George Tarleton) first appeared in Stan Lee and Jack Kirby’s “Tales of Suspense” #93 (September 1967).

Hit Monkey will tell the story of a vengeful Japanese snow monkey, who is trained by the ghost of an American assassin to exact his revenge on the Tokyo underworld. Described as a “darkly cinematic and brutally funny revenge saga,” the showrunners will be Josh Gordon and Will Speck, who directed Blades of Glory and Office Christmas Party. Hit Monkey was created by writer Daniel Way and artist Dalibor Talajić, and first appeared in April 2010’s “Deadpool” #19.

The Tigra & Dazzler Show will depict the two superheroes as best friends, while they “fight for recognition among powered people who make up the eight million stories in Los Angeles.” The showrunners will be comedian Chelsea Handler, and writer/producer Erica Rivinoja, whose credits include The Last Man on Earth and South Park. Tigra (Greer Grant Nelson), a mutated half-woman, half-tiger debuted in “The Cat” #1 (November 1972), while Dazzler (Alison Blaire), a mutant with the ability to convert sound vibrations into light and energy beams, first appeared in “Uncanny X-Men” #130 (February 1980).

The Howard the Duck show will see the talking fowl from another universe trying “to return home with the help of his unstoppable gal pal Beverly before the evil Dr. Bong can turn him the crispiest dish on the menu.” Kevin Smith and Aqua Teen Hunger Force co-creator Dave Willis will serve as the showrunners. Created by writer Steve Gerber and artist Val Mayerik in 1973, Howard the Duck previously starred in the infamous 1986 Lucasfilm production of the same name, and has had cameos in both Guardians of the Galaxy films, where he was voiced by Seth Green.

Finally, the animated special The Offenders will unite all these characters into saving the world with an as-yet-unrevealed team leader. No writers or executive producers are attached at this stage, other than Marvel TV’s Executive Vice President Jeph Loeb. Loeb commented on the line-up:

“A giant head. A monkey. A tiger lady and a disco queen. And the duck. Brought together because no one else could but Marvel Television on Hulu. M.O.D.O.K., Hit Monkey, Tigra & Dazzler and Howard the Duck will form a team no one asked for — The Offenders (and wait until you see who the Team Leader is!)! We have such tremendous talent bringing amazing adult animation that’s fun, fresh and fantastic.”

The announcement echoes Marvel TV and Netflix’s deal in 2013, which led to the production of four live-action TV series – Daredevil, Jessica Jones, Luke Cage and Iron Fist – that culminated in the crossover miniseries The Defenders. Since then, Netflix have canceled most of those shows, leaving only Jessica Jones (which premieres its third season later this year), and the Daredevil spin-off The Punisher. Marvel TV and Hulu have so far only produced one live-action series, Runaways. No release date was announced for any of these animated shows.