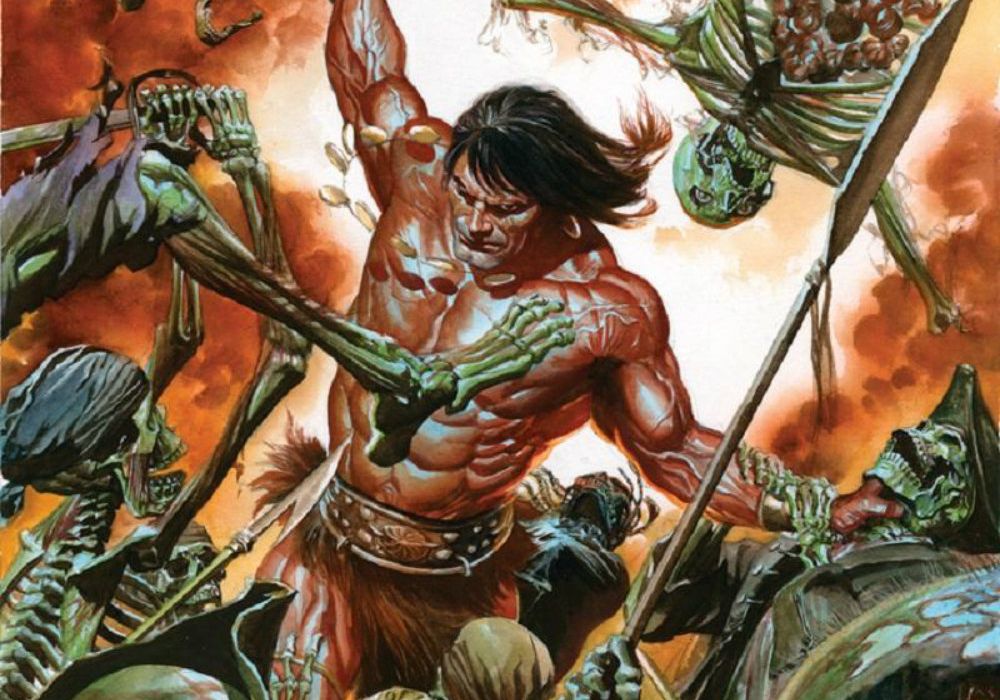 Marvel dropped a ton of reveals at their Next Big Thing panel this afternoon at New York Comic-Con. Moderated by Editor-in-Chief C.B. Cebulski and featuring Jason Aaron, Donny Cates, Gerry Duggan, Dan Slott, Jim Zub, and Carmen Carnero, the panel discussed another “Conan” title, an ‘Avengers: No Surrender’ sequel, and the 2019 event book “War of the Realms.” Images from the panel are courtesy of Newsarama.

The panel began with everyone previewing their current work. Jason Aaron teased the upcoming “Avengers” #700, which will debut a new Avenger to the team. Dan Slott discussed “Tony Stark: Iron Man” saying that #5 will be a story about Tony’s brother Arno, and #6 is a big issue that retailers should “order heavy on.” He went on to say that the wedding in “Fantastic Four” #5 between Alicia Masters and Ben Grimm will definitely happen. Donny Cates discussed “Venom” and “Cosmic Ghost Rider,” Gerry Duggan previewed what’s coming up in “Infinity Wars,” and Aaron displayed his excitement about “Conan” – which he said is one “big 12-issue story” – before the reveals began. 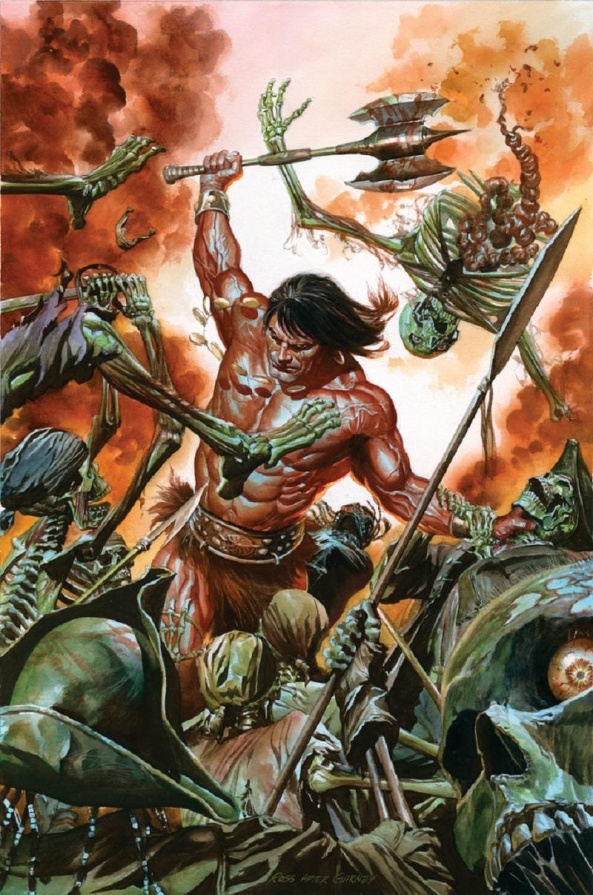 First up, the panel announced a second Conan title, “Savage Sword of Conan” written by Gerry Duggan, illustrated by Ron Garney, and colored by Richard Isanove. The first issue will debut in February 2019, and both “Conan” titles will have serialized novellas as back-up stories. Marvel has revealed more about “Savage Sword” over at their website. 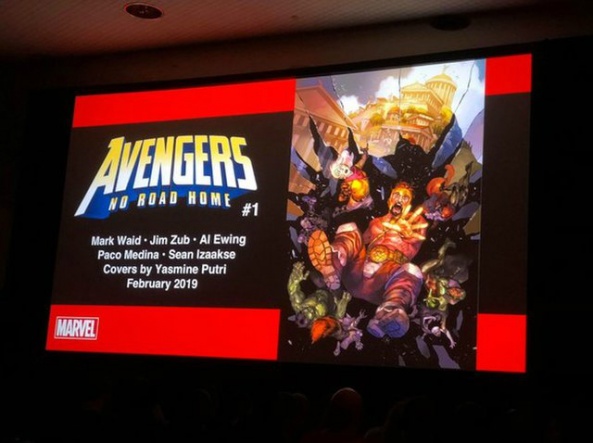 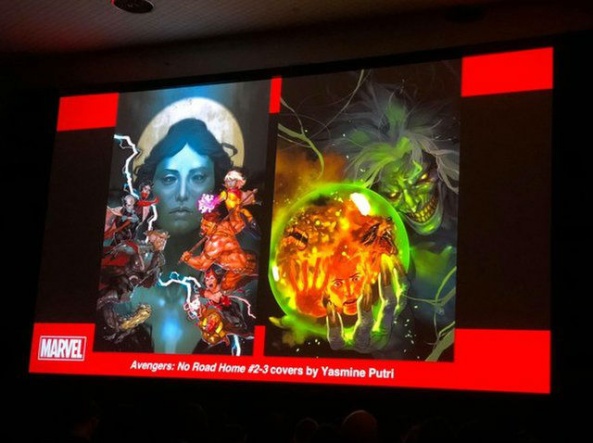 Next up, the panel revealed a new weekly sequel to ‘Avengers: No Surrender’ called “Avengers: No Road Home.” The series will be co-written by ‘No Surrender’ writers, Mark Waid, Al Ewing, and Jim Zub, with art by Paco Medina and Sean Izaakse and covers by Yasmine Putri. The weekly book will begin in February, and feature a big character return on par with Hulk’s return in ‘No Surrender.’ Tom Brevoort later revealed on Twitter the series would be ten-issues. 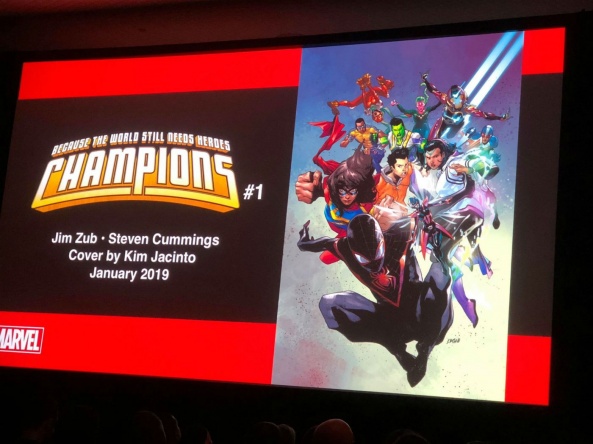 “Champions” was revealed to be relaunching in January with a new #1 issue, written by Jim Zub, with art by Zub’s “Wayward” collaborator Steven Cummings. Zub described the series on panel as “‘Legion of Superheroes for Marvel.” 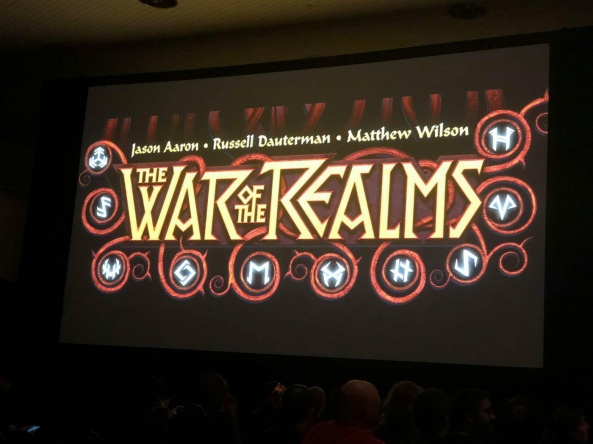 Finally, the biggest reveal came with the unveiling of “War of the Realms,” an event comic from Aaron, Russell Dauterman, and Matt Wilson. The event is the story Aaron has been building to for six years in all his “Thor” titles. While not a ton was revealed, the event will begin in April 2019 and include Jane Foster.

Other reveals on the panel included:

– Newly announced “Captain Marvel” artist Carmen Carnero has signed an exclusive contract with Marvel. She flew all the way from Spain to be at the panel. “Captain Marvel” from Kelly Thompson and Carnero debuts in January.

– “Marvels,” the Kurt Busiek and Alex Ross series, is getting a 25th anniversary reprint in February. Cebulski also revealed that Busiek and Ross have more in store that can’t be talked about yet, and that Ross would be drawing “Marvels” 25th anniversary variant covers.

– 2019 is the 80th anniversary of Marvel Comics, and the publisher announced more one-shots from some of their classic non-superhero properties, including “Ziggy Pig & Silly Seal,” “Gunhawks,” and “Love Romances.” The one-shots will begin in January with “War is Hell,” written by Howard Chaykin with art by Phillip Kennedy Johnson and others, “Crypt of Shadows” from Al Ewing, Garry Brown, and others, and “Journey Into Unknown Worlds” from Cullen Bunn, Clay McLeod Chapman, Francesco Manna, and others.

– Hasbro is also celebrating Marvel’s 80th anniversary with a new line of Marvel Legends vehicles in the spring.

– Taking questions, Cebulski teased a new “Gwenpool” project in the works, and another female-led book coming out in January that will be announced soon.

Not revealed on the panel, but also teased throughout the day:

– At the Marvel Fanfare panel, Cebulski teased that “Young Avengers” is set to make a return in some form or fashion in 2019.

– Taking over from “Daredevil” (which is ending in November), a new series “Man Without Fear” was announced written by Jed MacKay (“Daughters of the Dragon”) with art by Danilo Beyruth. The series is set for a January launch as well, and will be a weekly series, as revealed at the Marvel True Believers panel.

We’ll have more details when they’re available, until then keep following our coverage of NYCC 2018.