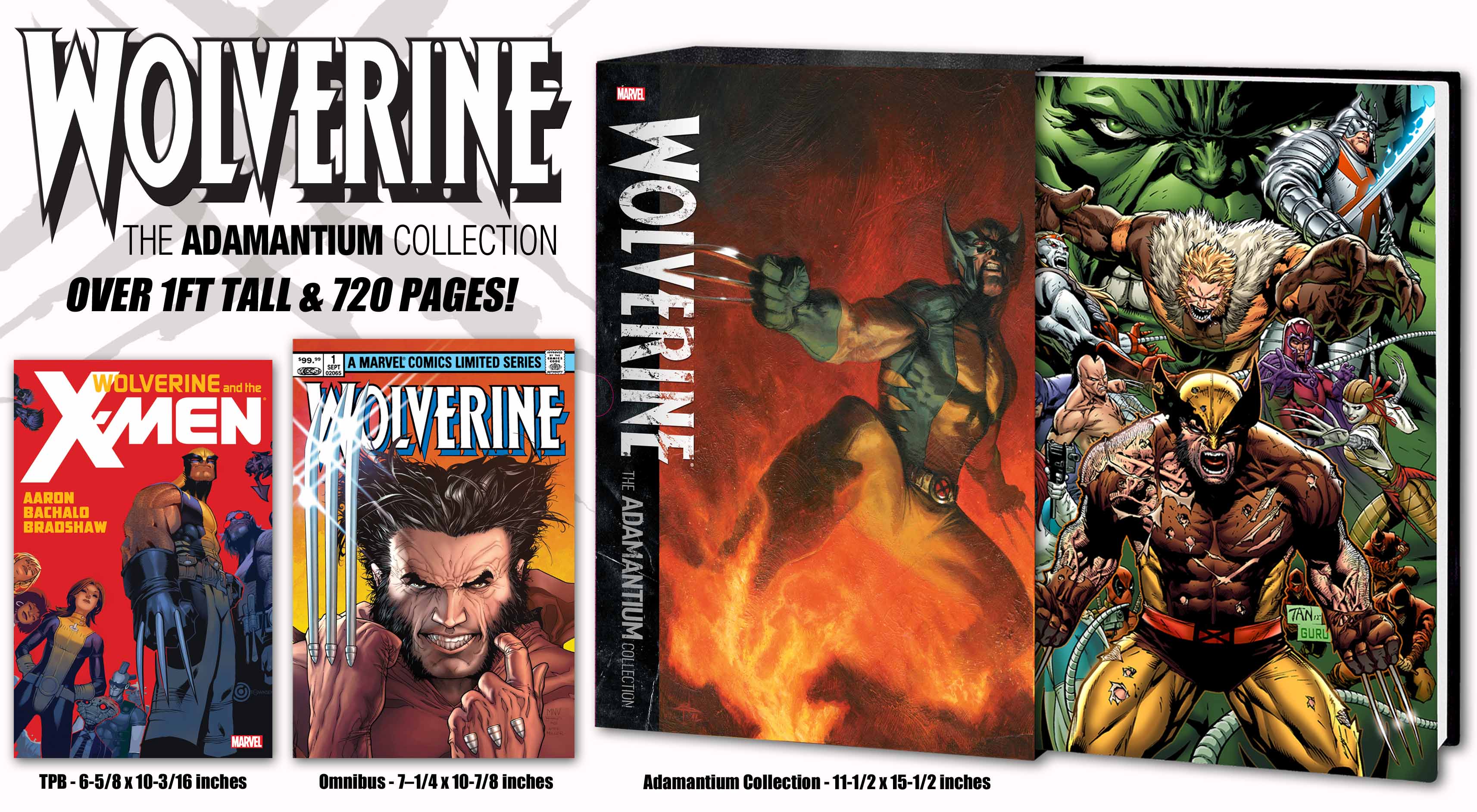 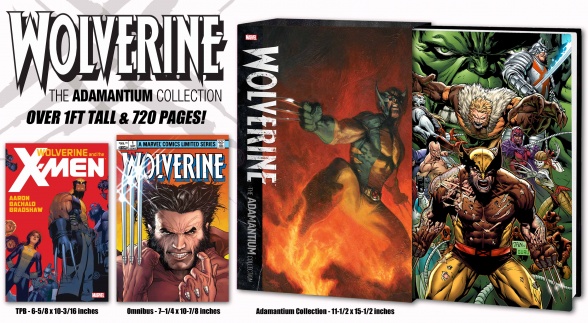 In the immortal words of one Wedge Antilles: look at the size of that thing!

So, is there like a Wolverine movie coming out or something? Dude seems to be everywhere. Between the two new ongoing series and the Mark Millar omnibus (I’m still waiting on vol. 2 of the Jason Aaron omnibus, Marvel) Marvel pushing the clawed one big time. Which is why they’ve just revealed details on the new Wolverine: Adamantium Collection.

Now, you may be asking yourself “What’s so special about this Adamantium Collection?” and, boy, do I have answers. First of all, it’s the first collection using the new Mighty Marvel Format of 11-1/2 x 15-1/2 inches. That’s over a foot tall which is a good 4 inches taller than the deluxe hardcover size of Marvel’s omnibus collection.

And what does this Adamantium Collection actually collect? Well, it’s got the “Origin” series by Paul Jenkins and Adam Kubert which detailed the life of young James Howlett and how he became Logan. And Barry Windsor Smith’s immortal “Weapon X” tale of how Logan became the Weapon X (seriously, I only just reread this and it holds up like nobody’s business). It also collects Chris Claremont and Frank Miller limited series which serves as basis for the new film, the recently reprinted “Wolverine: Not Dead Yet” story by Warren Ellis and Leinil Yu, and undisclosed number of issues of “Wolverine And The X-Men” and a host of single issue tales.

Slicing it’s way into stores in June, the “Wolverine: Adamantium Collection” might just be the definitive of Ol’ Canucklehead. And with DC using the omnibus format more and more, is this Marvel’s answer to the Absolute editions? Might be. 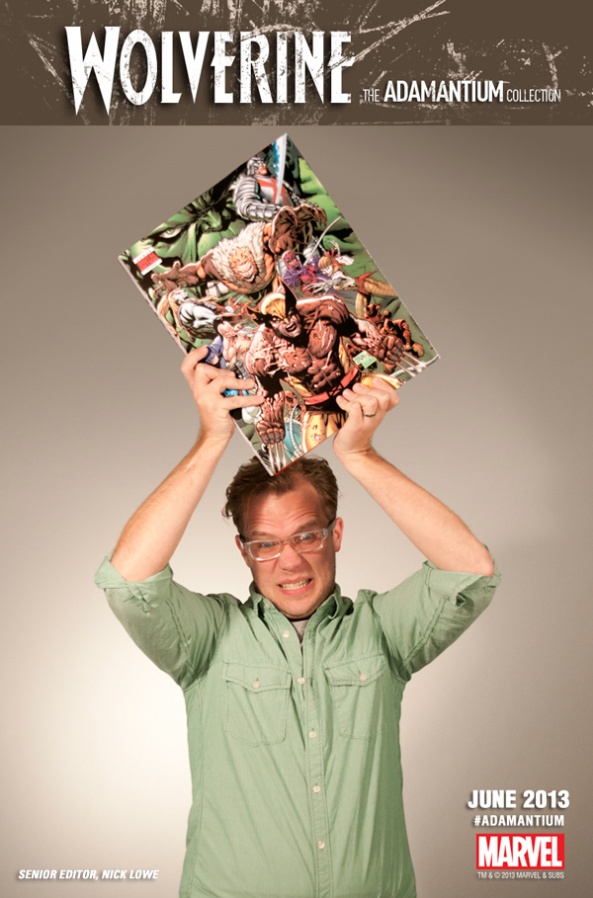 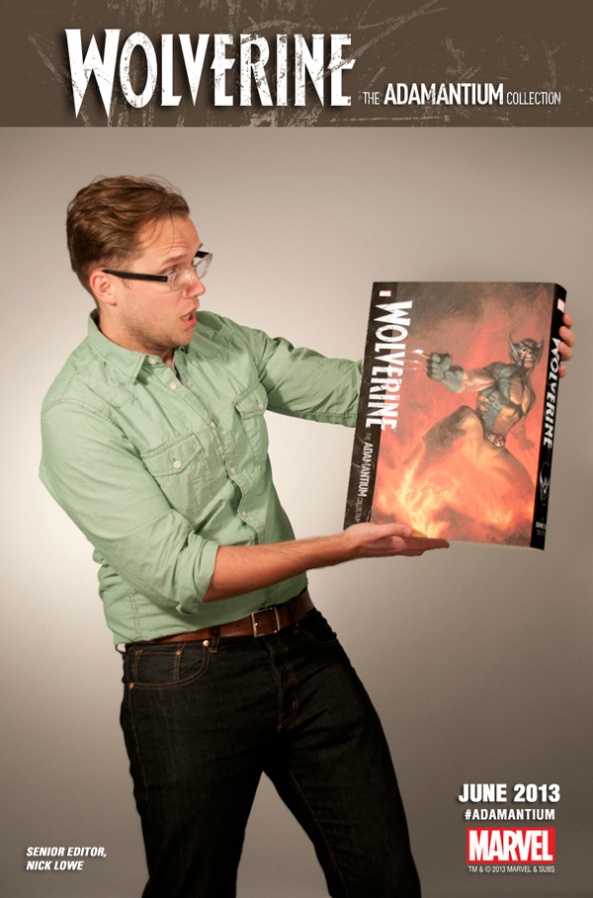 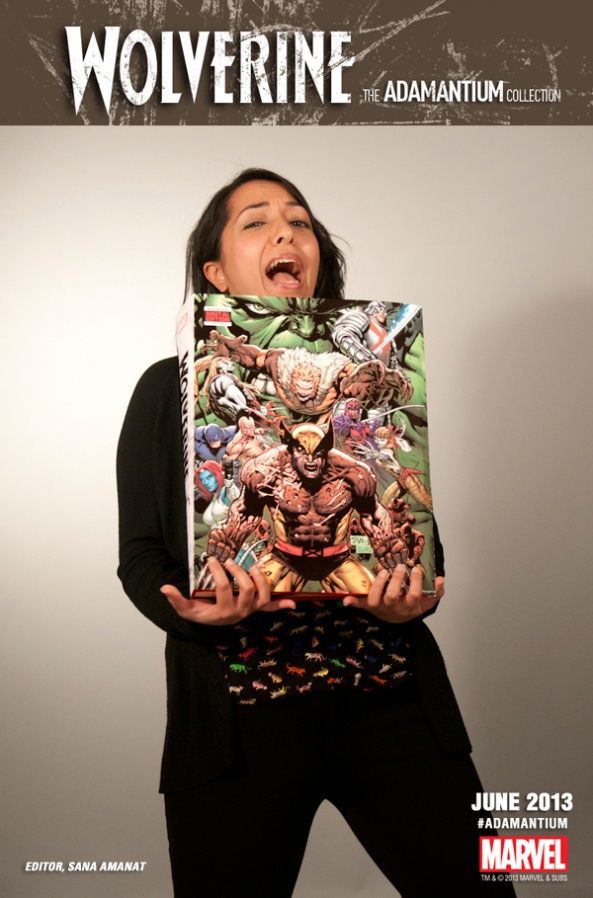 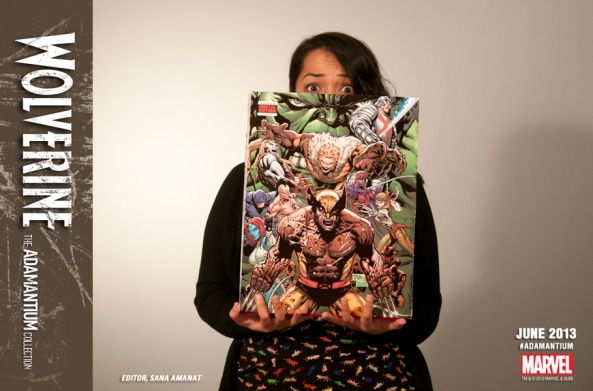 There’s more information about the collection in the Marvel press release below.

Wolverine is the best there is at what he does, and this June find out why in the MASSIVE, Wolverine: Adamantium Collection HC! This all-new Mighty Marvel Format (the self-proclaimed, Adamantium Sized) , presented at over one foot tall, packed with 720 pages, and weighing in at 16 pounds, chronicles the best moments from Wolverine’s long and storied past by the greatest creators in Wolverine history! Now for the first time, fans can witness the transformation of sickly James Howlett into the battle-hardened Logan, and then into the metal-clawed super hero called Wolverine in this jaw dropping new format.

” Wolverine is the Clint Eastwood of comic book characters, an enigmatic loner with a sin-riddled past that he’s desperate to atone for, even if he won’t outright admit it,” explained Axel Alonso, Editor In Chief, Marvel Entertainment. “With such a rich history, fans of the character are in for a real treat, because even if they’ve read all the stories before, with the ‘Adamantium Collection’ – they’ve never read them like this!”

A one of a kind, oversized slipcased hardcover packed with a trove of extras, the Wolverine: Adamantium Collection HC is a must have not just for fans of Wolverine, but any super hero!

“We have never compiled a collection as massive in terms of page count, size AND weight, so fans better prepare their coffee tables and bookshelves for this one,” said Ruwan Jayatilleke, Associate Publisher, Marvel Entertainment. “With this collection, we’re giving fans the ultimate collection, the ultimate collectible and ultimate guide to one of the most popular characters in comics today!”

The Wolverine: Adamantium Collection HC includes a code for a free digital copy on the Marvel Comics app (for iPhone®, iPad®, iPad Touch® & Android devices) and Marvel Digital Comics Shop. Additionally, this collection also features special augmented reality content available exclusive through the Marvel AR app – including cover recaps, behind the scenes features and more that add value to your reading experience at no additional cost.

This June, experience the life of Wolverine from where it all began to where he is today! This is a collection for the ages, so what are you waiting for?! Go reserve a copy of the Wolverine: Adamantium Collection HC today!