This just in, the solicitations for Mignola titles coming out in November 2016. Plus, we’ll also cover all the Mignolaverse-related news from the last month. But first, let’s start with the solicitations…

In an ancient temple lost deep in the jungle, the heroes find proof of the rumored human sacrifices and answers about the Cult of the Black Flame.

Liz Sherman blew up the center of the earth to stop the spread of the frog men with which the Black Flame planned to overrun the world. Although she killed that Black Flame, the devastation Liz wrought brought about a new Black Flame and a more terrifying worldwide wave of monsters. Facing an uncertain future, the BPRD count up their casualties as Hell on Earth comes to a close.

An unusual ghost hunt leads Hellboy to a spectral monkey with a message for a grieving family.

“If you’re bringing one monster home this Halloween, make it Hellboy.” —Following the Nerd

When an old enemy emerges as the ringleader of the risen dead, Sir Edward Grey appeals to a higher power of his own to fight back.

Abe Sapien’s “Dark and Terrible” story reaches its finale, and the answers Abe uncovers about his own existence reveal some of the biggest secrets of the Hellboy saga.

AWOL from the Bureau for Paranormal Research and Defense for more than a year, Abe travels to two lost kingdoms before returning to America. There he’ll confront the most nightmarish version of the fate he’s run from all along, as well as the necromancer who sees Abe as a means to control the end of mankind. Collects issues #32–#36.

OK, that’s it for solicitations. On to the news! 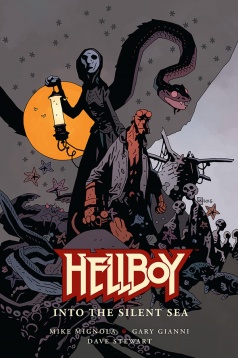 • If you’re familiar with the work of Gary Gianni, then you’re going to be excited about this, and if you aren’t familiar, then you are in for a treat. Next May, “Hellboy: Into the Silent Sea” comes out. Like “Hellboy: The Midnight Circus” and “Hellboy: House of the Living Dead” before it, this book will be released as a hardcover graphic novel. Illustrated by Gary Gianni (“The MonsterMen”) and set shortly after 2005’s “Hellboy: The Island,” this maritime adventure looks truly incredible. You can read all about it here. (I knew this image was teasing something!)

• Chris Roberson spoke to The Beat about the upcoming “Witchfinder: City of the Dead” and “Rise of the Black Flame” miniseries. There’s also a few preview pages for those craving an early look.

• And John Arcudi spoke to The Beat about “Lobster Johnson” and “B.P.R.D. Hell on Earth.” 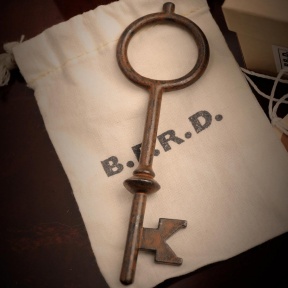 • Skelton Crew Studios has another item from their B.P.R.D. Artifact Archive on the way: Saint Dunstan’s Key (as seen in “Hellboy: Box Full of Evil”). Pre-orders are open until September 13. This piece is a limited edition run.

• If you missed “Joe Golem, Occult Detective” in singles, you can check out the first issue at Crave Online. The hardcover collection came out last month.

• Likewise, if you missed “Hellboy and the B.P.R.D.: 1953—Beyond the Fences,” the first issue can be read on Polygon. The trade collection came out last week.

• Loot Crate’s August theme is anti-heroes and there’s something in there to do with Hellboy. I’ve no idea what, of course.

• The Art of Mike Mignola has revamped their website and has a few new items in their online store.

• Tonci Zonjic has updated his website. There’s some cool behind-the-scenes pieces from “Lobster Johnson: Metal Monsters of Midtown”. Also, check out this!

• And “Hellboy and the B.P.R.D.: 1954—The Black Sun” artist Stephen Green drew this awesome Agent Howards piece for a commission.