Welcome to Mignolaversity, Multiversity Comics’ home for all things Mike Mignola. May’s another packed month for Mike Mignola’s books with a brand new series joining the Hellboy Universe roster, one I’ve been wanting for a while. So let’s check out what’s ahead.

THE HOUSE OF LOST HORIZONS:
A SARAH JEWELL MYSTERY #1 (of 5) 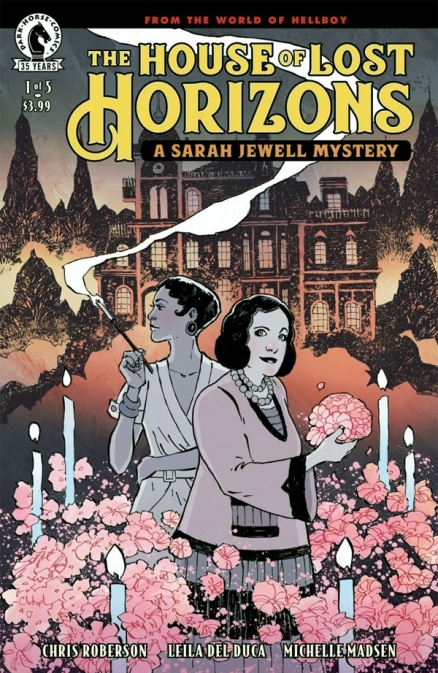 A locked-room murder mystery puzzles paranormal detective Sarah Jewell and her associate Marie-Thérèse when a weekend trip on a private island off the coast of Washington goes astray. Trapped by a storm and surrounded by myriad suspects who have gathered for an auction of occult items, the intrepid duo must unravel the supernatural mysteries surrounding the guests in hopes of uncovering the murderer! But all the while, bodies keep piling up, and at any moment Sarah or Marie-Thérèse could be next!

Investigator Sarah Jewell (Rise of the Black Flame, Witchfinder: The Reign of Darkness) gets her own series in this murder mystery with an occult twist.

Mark Tweedale: I’ve wanted this series since we met Sarah Jewell and Marie-Thérèse LaFleur in 2016’s “Rise of the Black Flame”. By the time we got the short story, ‘The Longest Night,’ in the “Hellboy Winter Special (2019),” it was pretty clear there was something in the works. . . but then the pandemic hit pushing the title from its original 2020 release to May 2021.

Even setting all that aside, this just sounds like fun. The announcement on Flickering Myth described the upcoming miniseries as a murder mystery set on a private island where an occult auction is being held. And wouldn’t you know it, everyone is trapped on the island by a storm.

As a someone that thoroughly enjoys Agatha Christie, this totally sounds like my jam. The premise already has me thinking of And Then There Were None. 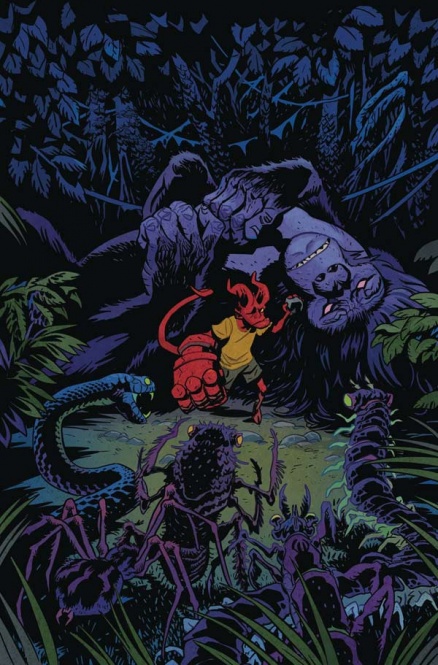 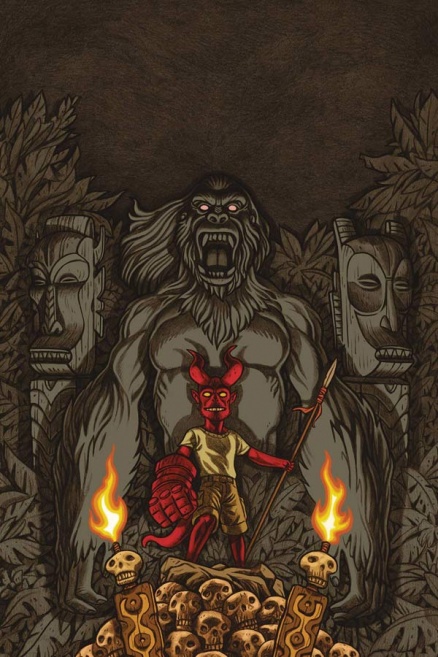 The vampire queen Vesperra has awakened! The ancient ape-god of the island has emerged from his avatar to fight her, but it may not be enough. Can Hellboy, Professor Bruttenholm, and their hosts survive long enough for the two adventurers to escape from the mysterious island they crashed on?

MT: As much as I’ve enjoyed the adventure (and Tintin references) of Matt Smith’s previous covers, this is the one that makes me most excited about the series. It promises a real emotional punch. What can I say? I like my comics with some sadness in them.

Firelight witches attack Sofia’s plane and cause a devastating crash. Now Sofia and Imogen must race to meet up with the rest of the survivors before the Hexenkorps witches kill any survivors that may remain.

Join the original Baltimore writing team of Mike Mignola and Christopher Golden as they continue the horror legacy alongside the stunning art of Bridgit Connell!

MT: Since no issues of this are out yet, there’s not a lot I can say here, except that I’m looking forward to readers meeting Imogen. . . 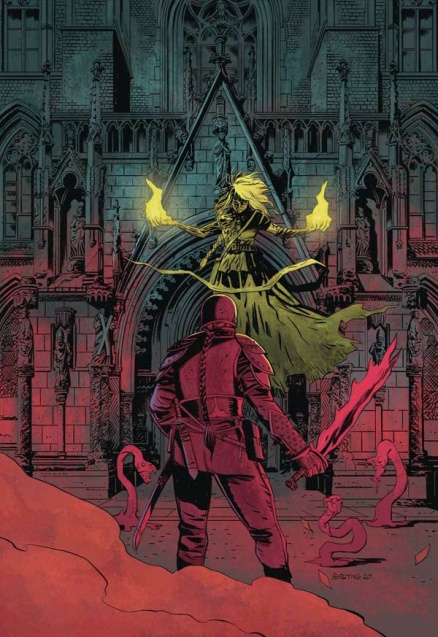 Called forth from beyond the grave to fight witches once again, Cojacaru the Skinner wreaks her havoc on the witches of the Hexenkorps. But with their evil buoyed by the violence of the Nazis and the supernatural presence of the Outer Dark, the ghostly warrior will have to depend on a ragtag group of white witches and resistance soldiers to back her up. It will prove to be a desperate fight indeed.

MT: If you haven’t already, I recommend revisting “Joe Golem: Occult Detective—The Conjurors,” which first introduced Crina Cojacaru. Even as a child, she was already a fascinating character. . . 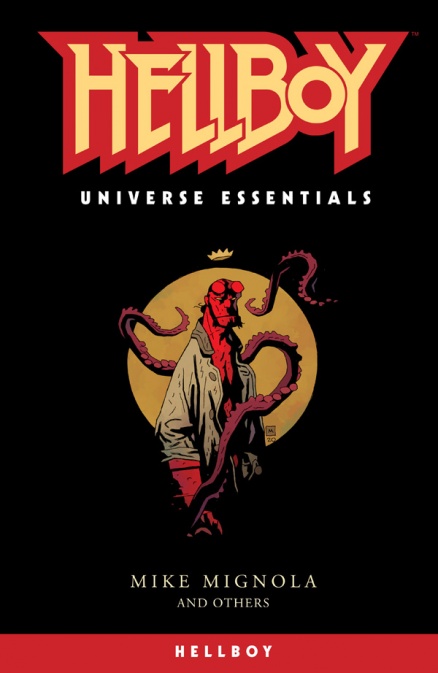 Take a bite of the Hellboy universe with the creator’s hand-picked essential stories in this new jumping-on point collection!

Confront the undead, swim to strange places, and encounter powerful fey in this introduction to the world of Hellboy. Newcomers to the series needn’t have read the original stories to jump right in and see what Hellboy is all about thanks to this collection of short stories, selected by Mike Mignola himself as the perfect introduction to his most famous comic book character!

Featuring stories and art by Mike Mignola, with colors by longtime collaborator Dave Stewart, curious fantasy, horror, and occult readers looking for a taste of something different will love this new gateway into the Hellboy universe.

Collects “essential” short stories from the world of Hellboy, as chosen by Mignola: The Chained Coffin, The Third Wish, Pancakes, The Nature of the Beast, The Corpse, The Baba Yaga, A Christmas Underground, The Ghoul, and The Troll Witch.

MT: The “Hellboy Universe Essentials” line is designed for those that want to dip their toe into this universe, but not jump into the deep end. I get why this line exists—after twenty-five years this universe can be pretty intimidating and for some, dipping their toes is enough. I think Mike Mignola has put together a story selection of stories here, with stories responding to or prompting the larger narrative carefully avoided. 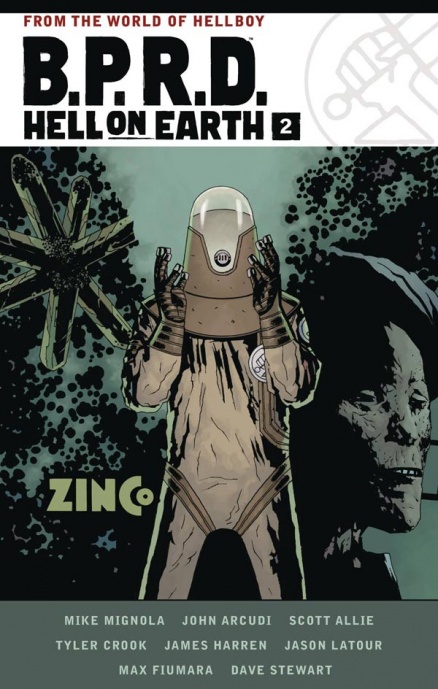 The ultimate collection of B.P.R.D.: Hell on Earth continues in a new omnibus format!

America’s monster problem explodes, society crumbles, and Liz Sherman rejoins the fight, as Nazis seek to bring Rasputin back to finish what he started when he first conjured Hellboy! This new omnibus edition collects B.P.R.D. Hell on Earth volumes 4–6, plus a generous sketchbook section.

MT: I know a lot of readers have been impatient for these paperback omnibuses. Well, they’re on their way! 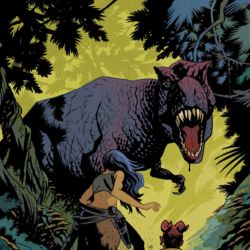 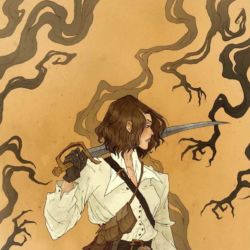 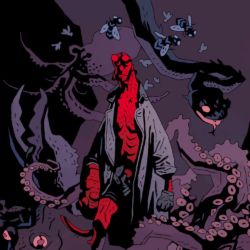 Welcome to Mignolversity, Multiversity Comics’ home for all things Mike Mignola. Earlier this month, we spoke to Mike Mignola about a Kickstarter for a documentary exploring his career in comics, Mike Mignola: Drawing Monsters. The project hit its funding on its first day and has since gone on to unlock multiple stretch goals. In fact, […]