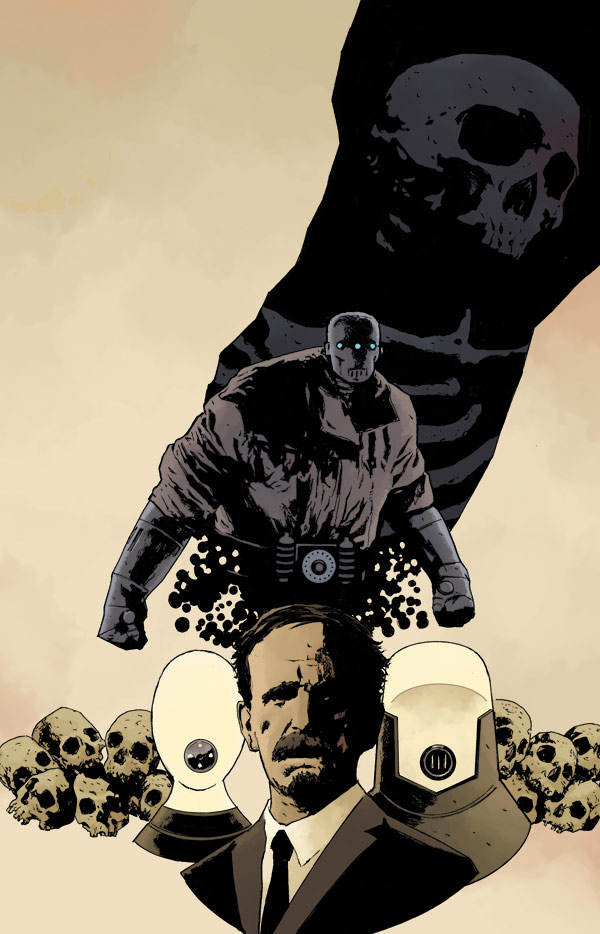 Welcome to another Mignolaversity News Update, your recap of Mignolaverse-related news from the past month… and this month there is A LOT. Just… heaps of stuff.

First up, the solicitations from Comic Book Resources… 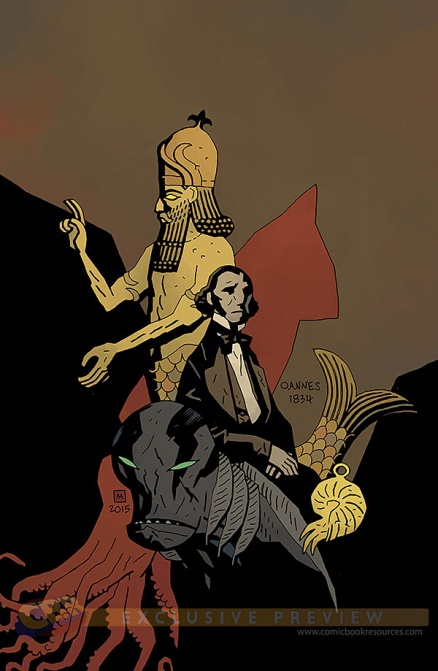 Abe’s memories of his life as a man in the nineteenth century come to the surface as secret societies fight over an object that could prove the true origins of the human race! 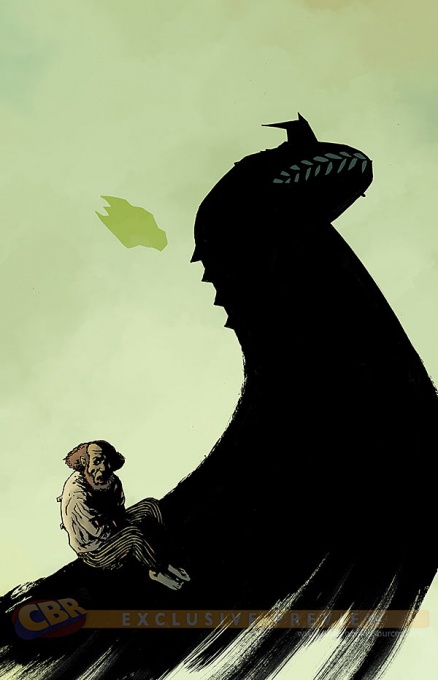 The Midwest is in trouble! With the BPRD’s largest foe unleashed upon the Earth, they struggle to keep the devastation from spreading, but even their strongest weapons are useless! 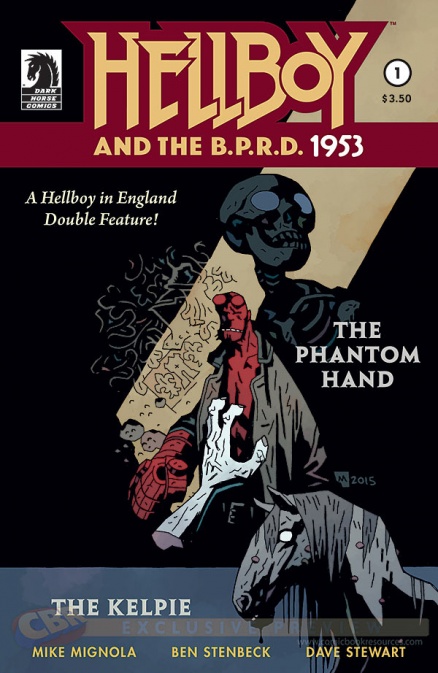 Hellboy and the B.P.R.D.: 1953 #1
The Phantom Hand & The Kelpie
Written by Mike Mignola
Illustrated by Ben Stenbeck
Colored by Dave Stewart
Cover by Mike Mignola

Hellboy’s first experiences with Bruttenholm in England involve the phantom hand of a murderer and a demonic water spirit in stories reminiscent of the early Mignola masterpiece “The Corpse.”
• Hellboy’s first ghost hunt!
“A magnificent introduction to the universe Hellboy occupies.” —Comic Book Resources
“This is a supremely enjoyable comic, and deserves a wide audience.” —Multiversity Comics
“All the makings of another classic Hellboy story.” —IGN 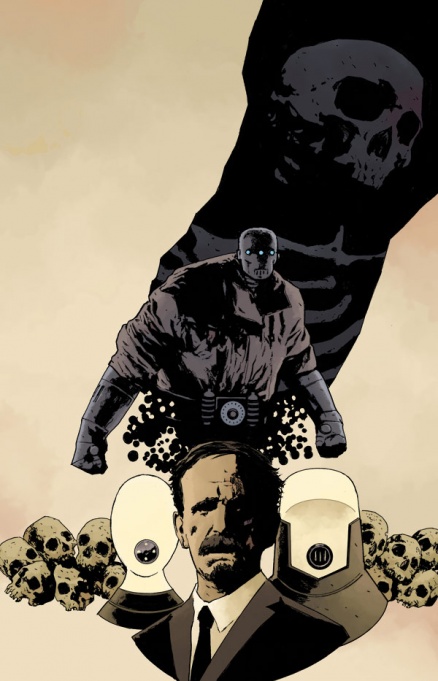 Johann and his troops take on an easy assignment destroying a monster. But things go bad when the civilians protecting it fight back and the Bureau agents turn against Johann, leading to a traumatic turning point in the ghost agent’s career. This volume collects B.P.R.D. Hell on Earth #130–#134.

And now, on to the news…

— I’ll kick off with the sad news. Unfortunately, John Arcudi will be leaving B.P.R.D. at the conclusion of the Hell on Earth in September 2016 with B.P.R.D. #147. “I’m excited about the amazing way John Arcudi is wrapping up B.P.R.D. Hell on Earth,” said Mike Mignola in Dark Horse’s press release. “Of course we are all sorry to see him leave the title, but he is doing such an amazing job on his way out. I will be forever in his debt—He is really responsible for making the B.P.R.D. what it is and while I’m excited about where that book is going (can’t say anything about that yet) everything we do in the future will be built on top of the rock solid foundation John created.”

“I won’t lie; it’s kinda sad,” said John Arcudi. “Mike and Scott handed me this universe so long ago, and to say it’s been a creatively rewarding experience doesn’t even start to cover it. From day one on up, I always worked with some of the very best artists in comics, and we’re talking about eleven straight years here! Of course I’m happy about that, and about having seen the Hell on Earth arc through from beginning to end—but I know there’s still a lot of story to tell, and I don’t want to go stale on this team after the huge solid they did for me, trusting me to play in this fantastic universe. That wouldn’t be right. I want to go out while the stories still feel fresh to me, and to Mike, and to Scott.”

“I was shocked when John said he wanted to move on,” said Dark Horse Editor-in-Chief Scott Allie. “He’s been essential to growing Mike’s world, the first guy we trusted to bring his own personality to the big stories, making the characters his own in lots of ways. For all the planning that goes into the Mignola books, there are actually things in John’s climactic run of BPRD that we never thought we’d do. He’s leaving BPRD with a bang. After Hell on Earth, we’re tackling Mike’s biggest mythological material, bringing in other voices like Chris Roberson to tell this next wave of stories, and everyone kicking in will be reading and rereading John’s work, me included, to make sure we get it right.”

“I was sorry to see John go and obviously, it was going to be a very big deal who was going to take over John’s role,” Mignola said in an interview with Entertainment Weekly. “And the reason why our stuff has worked for so long is that it’s only been a couple of writers on this stuff. Scott Allie was the editor, now he’s the writer, and then John and I. So the idea of bringing someone in this late in the game was really horrifying.”

The writer for the next (and I believe final) cycle of B.P.R.D. has yet to be announced. However, John Arcudi is not done with the Mignolaverse. Scott Allie assured fans on Twitter there’s a yet to be announced project to come from him. And he’ll still be doing Lobster Johnson too.

Robots from Tomorrow has a podcast interview with John Arcudi talking about his creator-owned title Rumble and his departure from B.P.R.D. You should definitely check that out. As should I. 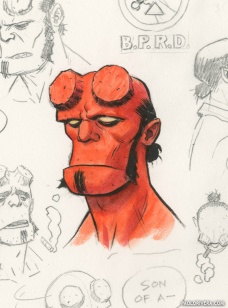 Art by Paolo Rivera.
— As you can see from the solicitations above, there’s more Hellboy and the B.P.R.D. on the way. The first two issues of 1953 will be short stories written by Mike Mignola with art by Ben Stenbeck. These short stories will follow Hellboy and Professor Bruttenholm to England for Hellboy’s first-ever ghost hunt. The following three will be a single story with art by Paolo and Joe Rivera, and written by Mike Mignola and Chris Roberson kicking off in February 2015.

— Speaking of Chris Roberson, he’s going to be very involved in the future of the Hellboy Universe books. Not only will he be writing Hellboy and the B.P.R.D., he’s going to be handling Witchfinder and other as yet unannounced projects. He’ll be making his debut in…

— The Hellboy: Winter Special will be coming out January 2016. Featuring a twelve-page story from Mike Mignola and Chris Roberson with art by Michael Walsh. This one-shot will include contributions of major artists, but other than Michael Walsh, none of them have been announced yet. We’ll get more news on this closer to the release.

— As of last month, most Dark Horse comics collections are now available on ComiXology, including all of Mignola’s books. Even the B.P.R.D. omnibuses are available. (If you are thinking of buying the B.P.R.D. bundle, I would advise against it. Buying the omnibuses instead you’ll get even more material for less than 60% of the bundle’s price. Plus you get expanded sketchbooks.)

— ComiXology spoke to Mike Mignola last month. Among other things, he mentioned that he was working on another illustrated novel (à la Joe Golem and the Drowning City and Baltimore, or, The Steadfast Tin Soldier and the Vampire) with an undisclosed author. (Not Christopher Golden. He’s busy with Baltimore and Joe Golem comics right now.) 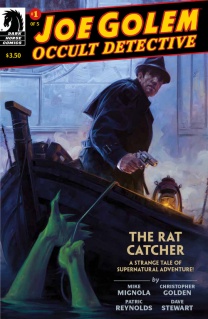 — Speaking of Joe Golem, Mike Mignola and Christopher Golden are adapting the character to comics. Joe Golem made his first appearance in a short story, Joe Golem and the Copper Girl, in 2015 followed a month later by an illustrated novel, Joe Golem and the Drowning City. A five-issue miniseries, Joe Golem, Occult Detective: The Rat Catcher, will debut in November. This series will be a prequel to the original novel and stand alone. If all goes well, Mignola and Golden have plans to continue the series, retelling the events of the novel and beyond. You won’t need to have read the novel, Joe Golem, Occult Detective will be completely accessible to new readers. Patric Reyonolds, who previously worked with Mignola on Abe Sapien: The Haunted Boy and a few short stories, will be doing the art for the first miniseries. Apparently his impressive work on Aliens: Fire and Stone got him the job. Check out the full story at Paste Magazine and the cover for the second issue at Comic Book Resources.

— A statue of “the first Hell Boy” is now available for preorder. This 12″ statue is based on a 1991 black and white illustration by Mignola that served as the genesis for the character.

— Last month we spoke to Laurence Campbell about the final Hell on Earth story, before launching into the next cycle of B.P.R.D.

— Mike Mignola spoke at the California College of the Arts. It’s great to hear him talk. He’s got a great sense of self-deprecating humour.

— I love behind-the-scenes material, and Max Fiumara seems to love sharing it. His latest blog post shows off a page from Abe Sapien: A Darkness so Great from script to final. Definitely check it out.

— Once again, Tonci Zonjic is posting Lobster Johnson pictures on his Tumblr. This warm-up illustration is particularly good. 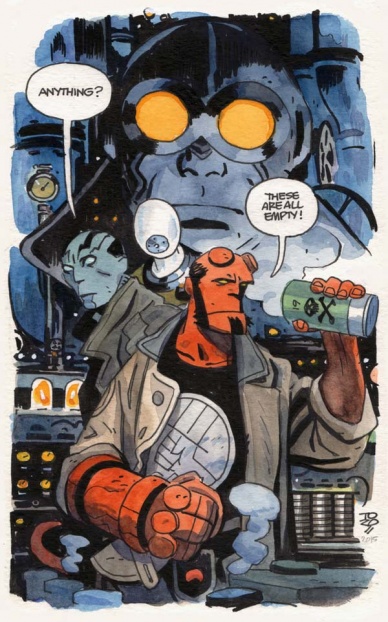 — Duncan Fegredo shared this impressive piece on Twitter. Man, I get so nostalgic seeing the old team together… I’d absolutely love to see Duncan Fegredo doing something in the Hellboy Universe again.

— B.P.R.D. and Witchfinder artist Tyler Crook did several commissions for Heroes Con, including this gem… 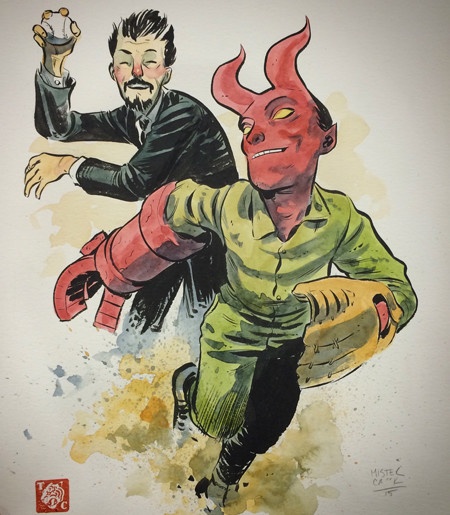