Welcome to Mignolaversity News Update, your recap of Mignolaverse-related news from the past month. Solicitations this month were posted on Paste Magazine’s website with a commentary by Scott Allie. I recommend checking it out if you want the full story. I’m just going to be running the solicitations… 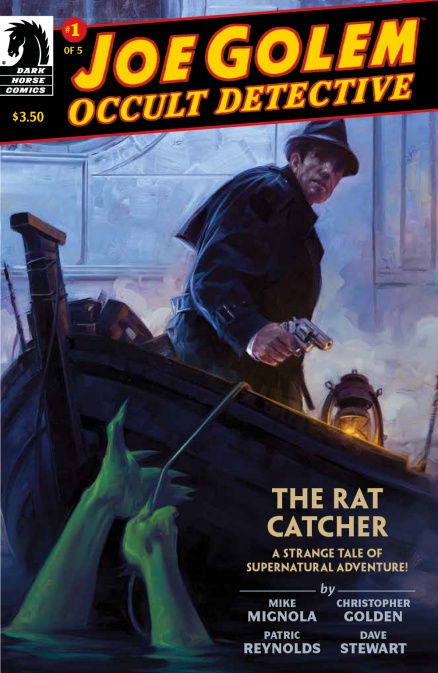 Forty years after disaster left Lower Manhattan submerged in thirty feet of water, children have begun disappearing below the surface. In this new series, Joe Golem hunts the terrifying creature that has been pulling children into the depths of the canals.
• Tie-in to illustrated novel Joe Golem and the Drowning City! 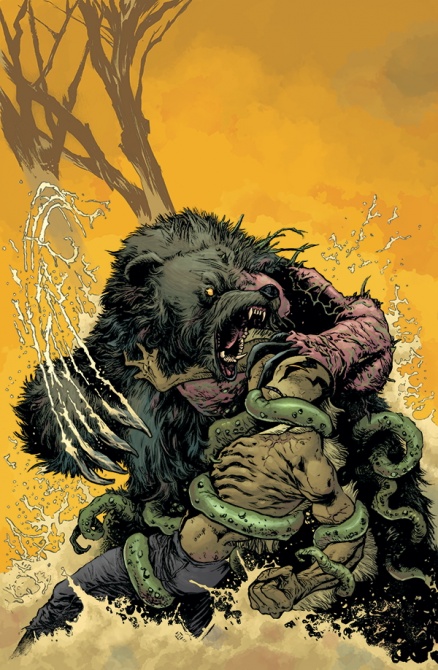 Monstrosities continue to spill out of the destruction Abe saw in Florida as he meets someone with answers about his role in the worldwide disaster.
• Kicking off a two-parter full of revelations! 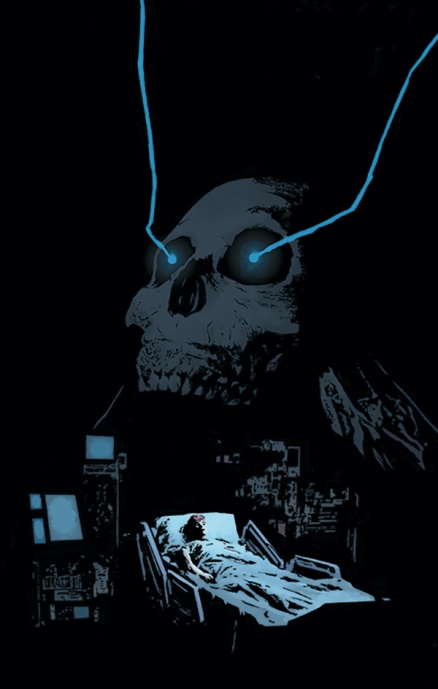 The BPRD send their two strongest champions to assist in the destruction of the Black Flame, and with the help of their newest ally’s incredible weapon, things are finally looking up. 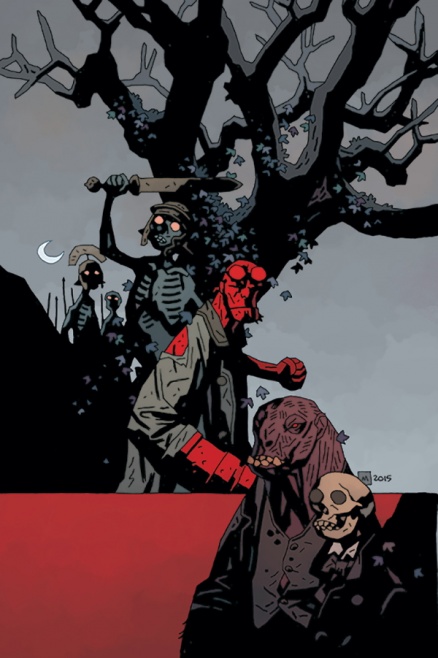 As Hellboy continues his journey across England with his mentor, he confronts some of the most horrible figures of British folklore—Rawhead and Bloody Bones.
New from Mike Mignola! 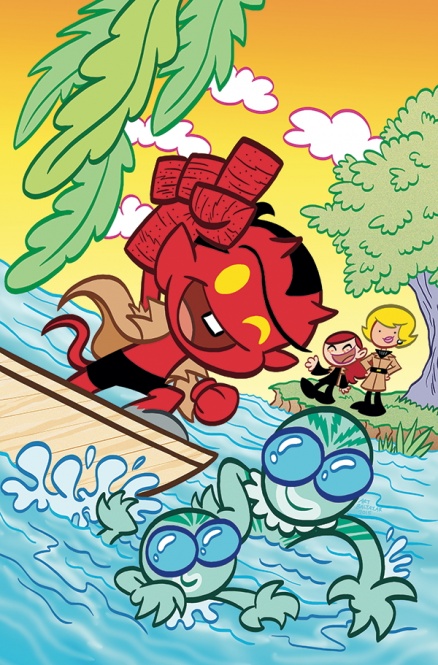 Aw yeah! Art Baltazar and Franco return to Itty Bitty Hellboy! This time, Hellboy, Abe, Liz, and friends are on a very special quest… to deliver underwear to the Island of Rogers! But their mission is suddenly interrupted by the discovery of the strange, mysterious beast known as the were-jaguar! 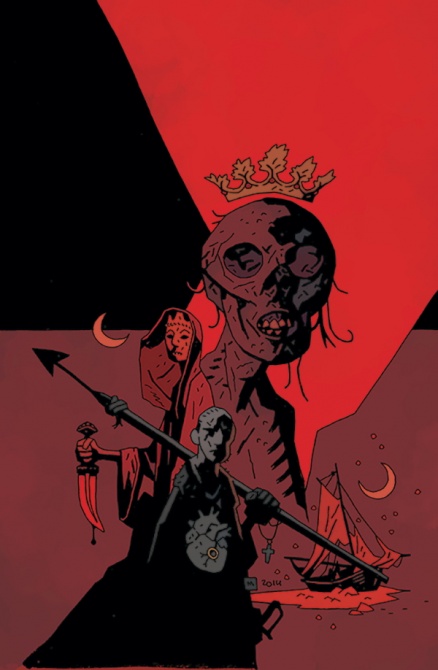 Continuing his quest to destroy the Red King, Lord Baltimore heads to the icy Baltic Sea and northern Russia, but he finds witchcraft in the streets of St. Petersburg and evil in its shadows. With new allies and fearsome new enemies, Baltimore continues his battle to save the world from the Red King. But as his path grows darker, he may not only lose his way but those closest to him as well. Collects Baltimore: The Cult of the Red King #1–#5.
Also available: Baltimore Volumes 1–5 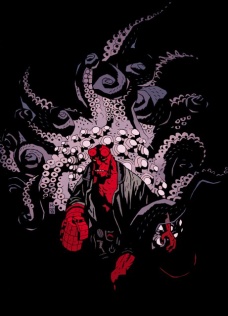 — The Art of Mike Mignola website has updated its shop with some new prints. You definitely want to check those out. (The one to the left has already sold out.) Orders are currently closed, but will resume as usual in two weeks’ time.

— In the wake of the announcement that John Arcudi is leaving B.P.R.D. Hell on Earth (but still sticking around in the Mignolaverse), there have been a few podcast interviews with him talking about his work with Mike Mignola and his creator-owned title with James Harren, Rumble. There’s Too Many Comics’ interview, All-Comic’s interview, and Robots From Tomorrow’s interview (I linked this one in the previous Mignolaversity News, but it was a late addition after the article ran, so you may have missed it).

— Last week Dark Horse Comics announced a Hellboy in Mexico trade paperback collection coming out April 2016. Check out the link for an exclusive look at the cover from Mike Mignola and Dave Stewart.

— Hannah Means-Shannon from Bleeding Cool interviewed Mike Mignola about Frankenstein Underground, Hellboy in Hell: The Hounds of Pluto, Hellboy and the B.P.R.D.: 1953, and The Hellboy Winter Special. If you’re spoiler sensitive, you may want to wait until Hellboy in Hell #7 is out, but it’s definitely worth reading.

— Mike Mignola also spoke to Tech Times about Hellboy in Hell and the possibility of a third Hellboy film.

— As many of you already suspected, B.P.R.D. Hell on Earth: Flesh and Stone was James Harren’s last major contribution to the Mignolaverse for the foreseeable future. However, in Hellmail (the letters column in the back of Hellboy universe issues) Scott Allie dropped a few hints at a little more from Harren. “James is moving on, and yet we other things planned with him. He’ll always be a part of the team, if mostly busy elsewhere.” Of course, Harren is quite busy with his creator-owned book with John Arcudi. You may have heard of it. It’s called Rumble and if you aren’t reading it, you should be. The second arc kicks off later this month.

— Sean T. Collins has written an essay about the Hellboy Universe on Grantland that’s worth checking out. It’s a reminder of what makes this universe so different from anything going on in Marvel and DC. No reboots, no retcons, just a steady walk to the long defeat.

— Craig Engler interviewed Scott Allie about his writing process on Abe Sapien. Check it out here.

— Tonci Zonjic has been drawing more Hellboy. Check it out below, and you can see his process on Tumblr. 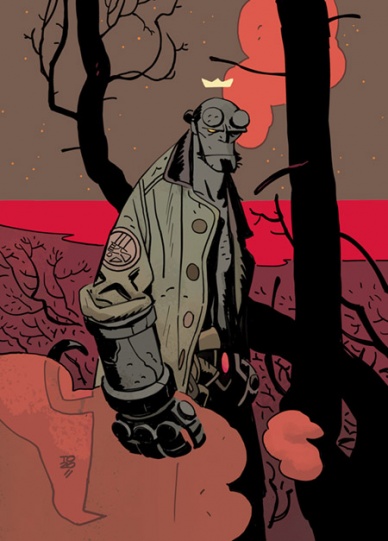