Welcome to Mignolaversity News Update, your monthly recap of Mignolaverse-related news. This month Bleeding Cool posted the October solicitations, so let’s check them out…

Rumors of the Black Flame cult practicing human sacrifice lead downriver and deep into the jungle, while the group’s guide is plagued by dreams of a dark goddess.

The BPRD faces heavy fatalities as western states are laid waste in the battle with the embodiment of cosmic evil, the Ogdru Jahad. The only hope to destroy the beast may be the unholy plan of the little demon girl Varvara.

Separated from the rest of the BPRD, Hellboy finds himself in the company of a familiar enemy with a new weapon—and plans to test it out on Hellboy.

Sir Edward Grey travels beneath London to the lair of a longtime enemy who needs his help fighting an even greater threat.

Baltimore’s allies relive their own troubled pasts while they bury their fallen friends. Can they uncover the origins of the Blood-Red Witch before she awakens the Red King—the devil behind all the world’s evil?

OK, that’s it for solicitations. On to the news! 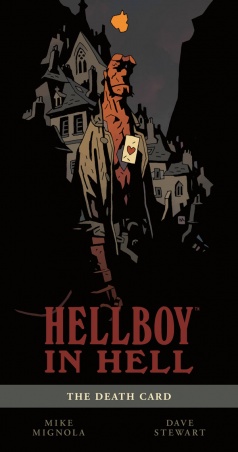 • For those of you going to San Diego Comic-Con, there are a few exclusive items available from the Dark Horse booth: a B.P.R.D. zippo lighter, a B.P.R.D. hip flask, and a hardcover edition of “Hellboy in Hell – Volume 2: The Death Card” (the perfect companion book for 2014’s exclusive “Hellboy in Hell – Volume 1: The Descent”. Those of you that are lucky enough to own both of these, just know that you have my eternal jealousy).

• Mike Mignola will also be at SDCC with a new print and t-shirt. Both should be available on the Art of Mike Mignola website in August.

• “Mike Mignola’s The Amazing Screw-On Head and Other Curious Objects – Artist’s Edition” is still on its way (IDW’s site lists it release as July, but I think that information is out of date). Randy Dahlk, the book’s designer, shows off a preview here. For those of you curious about what’s going to be in the book, the preview includes the contents page. Considering the book is listed as 160 pages on IDW’s site and the contents page only displays up to page 101, this may not be the full contents though.

• Peter Bergting, artist on “Baltimore”, will be selling “The Art of Berging” on his website later this month. Keep your eyes open for it.

• Strip Panel Naked did a piece exploring the final issue of “Hellboy in Hell” discussing how Mignola used narrative distancing. You can check it out here.

• A few pages from Tyler Crook’s “B.P.R.D. Hell on Earth: The Devil’s Engine” are up for auction from the Comic Book Legal Defense Fund.

• Paoloa Rivera showed off some more behind-the-scenes images from “Hellboy and the B.P.R.D.: 1953—Beyond the Fences” on his blog.

• Patrick Reynolds, artist on “Joe Golem”, was showing off a commission of Kroenen from the “Hellboy” films on his Instagram account. He’s also posted a few more inked pages from the last two arcs of “Joe Golem” (which comes out in a hardcover collection later this month).

• Meanwhile Max Fiumara has been showing of his pencils for the cover of the latest “Abe Sapien” trade collection.

• If you’re curious to see see what Stephen Green’s version of Hellboy might look like in “1954”, check out his concept work.

• I look forward to seeing all five of Duncan Fegredo’s covers for “B.P.R.D. Hell on Earth: Cometh the Hour” together…