Welcome to Mignolaversity News Update, your monthly recap of all the Mignolaverse-related news from the past month, except in this case we’ll actually be recapping two months. June was a quiet month and there was little to report. But before we get to the news, here are the September and October solicitations of Mike Mignola’s titles… 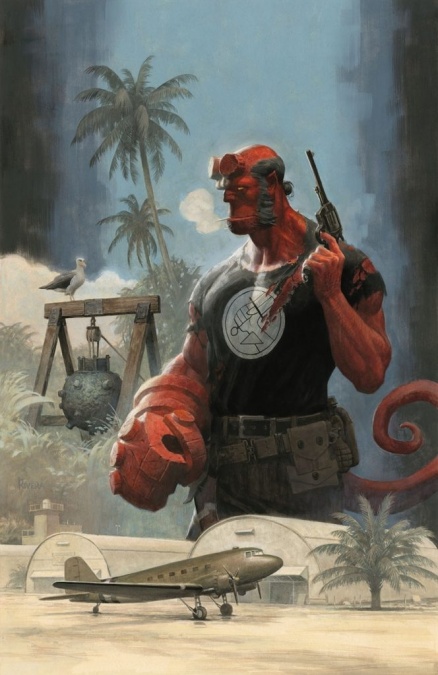 A layover on a remote island drops Hellboy into a web of intrigue involving government secrets and foreign agents waging their own cold war over a weapon that might be right up the BPRD’s alley. In England Bruttenholm uncovers more secrets, indicating a worldwide supernatural conflict about to boil over.

“The art by Brian Churilla was a real shining star. Not only because of his ability to use artistic metaphors, but in his ability to capture Hellboy in his art.” —Bounding into Comics 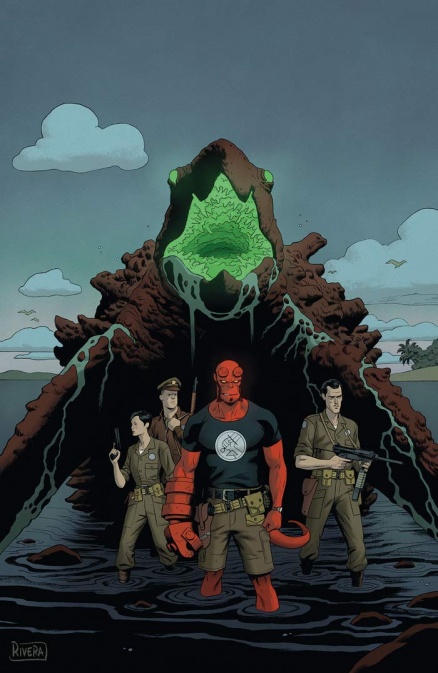 The mystery in the tropics heats up when a monster attacks, but the creature may have ties to a secret weapon at the center of an international conflict. Elsewhere, Bruttenholm’s own investigation suggests that the B.P.R.D. is embroiled in something much larger than he thought.

• Brian Churilla returns for more Hellboy and the B.P.R.D.! 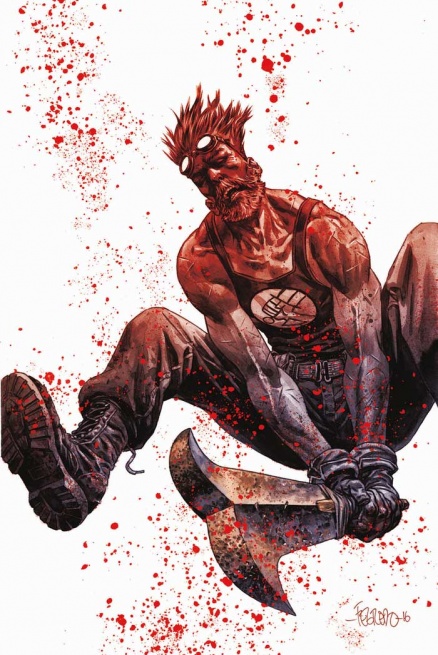 Bound to a prehistoric weapon, an ancient spirit wages an eternal war against the creatures that seek to destroy the world, and their human servants. 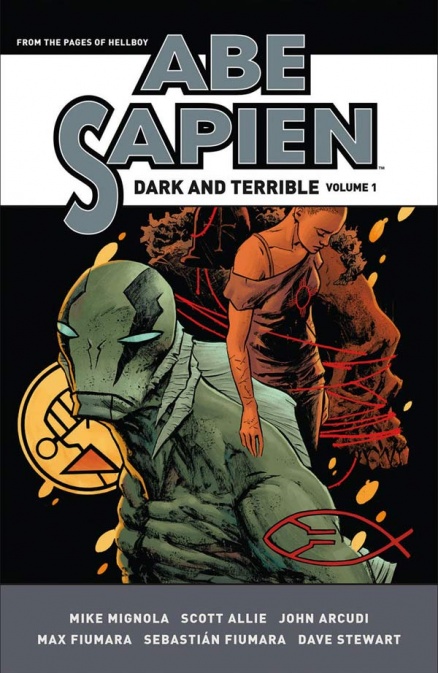 On the run from the BPRD, a newly mutated Abe Sapien—more inhuman than before—travels across a United States transformed and overrun by monsters. Abe’s search for the truth about himself—or his race away from his fate—mirrors the quest of an ancient necromancer to seize control of a world literally going to hell. 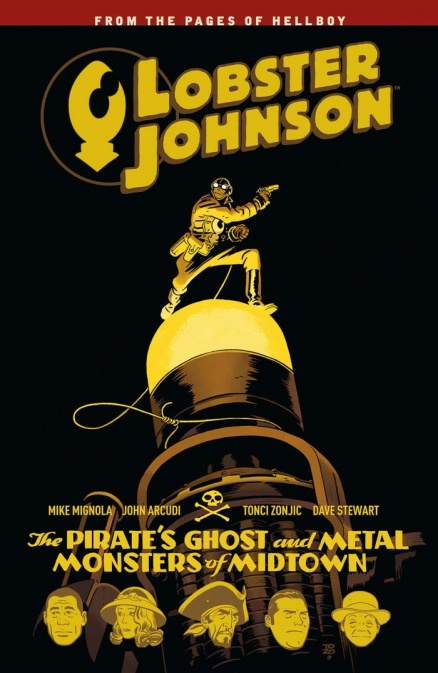 The Lobster is at his pulpiest in a pair of three-part stories drawn by veteran Lobster artist Tonci Zonjic. A trio of robots terrorize New York City, and the only thing more mysterious than their origins is their motives. When a pirate ship’s ghostly crew appears on the Hudson River out of thin air, the harbor patrol calls on the Lobster! Collects Lobster Johnson: Metal Monsters of Midtown #1–3 and Lobster Johnson: The Pirate’s Ghost #1–3. 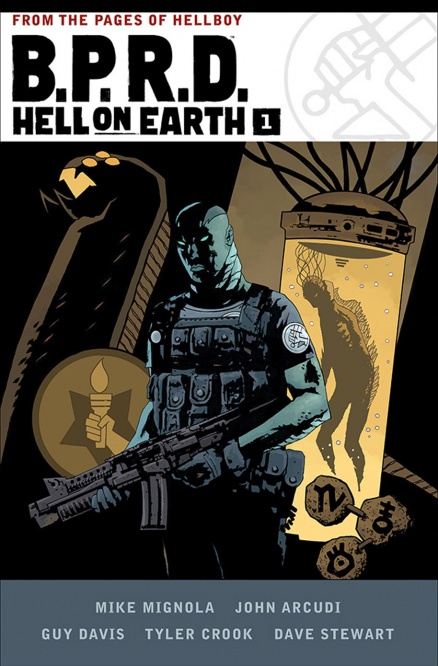 The plague of frogs has ended, but Earth will never be the same, and the fractured B.P.R.D. struggles to battle dangerous monsters and humans alike, from a trailer-park cult to a Russian town ravaged by a zombie-like virus.

Guy Davis’s final B.P.R.D. story sets the stage for Tyler Crook’s (Harrow County) backwoods-horror debut, as Liz Sherman hides from a world that she helped push toward Armageddon, and Abe Sapien is shot down by a girl who’s seen the world to come.

Rasputin, Krampus, and Koshchei the Deathless:
Evil Descends on the Mignolaverse This Winter

From Baba Yaga and Hecate, to the Black Flame and the Queen of Blood, Mike Mignola’s legendary Hellboy and the Bureau for Paranormal Research and Defense have battled some of the most dangerous and despicable demons and villains in all of comics. In advance of San Diego Comic Con 2017, Dark Horse Comics is revealing three new titles for the strange, shared Mignolaverse of comic books and graphic novels comprised of Hellboy and the B.P.R.D., Abe Sapien, B.P.R.D., Lobster Johnson and Witchfinder, with all three new titles focusing on villains. With stories by Eisner award-winning artist Adam Hughes—who is illustrating his first ever Mignolaverse story, iZOMBIE co-creator Chris Roberson, and acclaimed Mignolaverse artists Christopher Mitten and Ben Stenbeck, the three new titles will explore the secret origins of two classic villains, Koshchei the Deathless and Rasputin, and introduce the Krampus into Hellboy’s odd world of fantasy and folklore.

“We didn’t set out to publish three stories about bad guys for the holidays, it just worked out that way—and, really, at least one of these guys isn’t ALL bad,” said Mike Mignola. “It’s been a real pleasure working with Chris Roberson and Christopher Mitten again to flesh out more of the history of the Hellboy world—focusing on Rasputin before the arrival of Hellboy. You just knew there had to be more to say about that guy. Just like I’ve always known there was a lot more to say about Koshchei the Deathless, who I’ve loved since Hellboy: Darkness Calls. Now thanks to the great Ben Stenbeck, we get his full, odd, and tragic life story. And then what is there to say about the Krampus? This grim little Christmas story has been gathering dust for years on my mental shelf, apparently just waiting for the right artist to come along and ask to draw it. I just never imagined that the right artist would be Adam Hughes!” 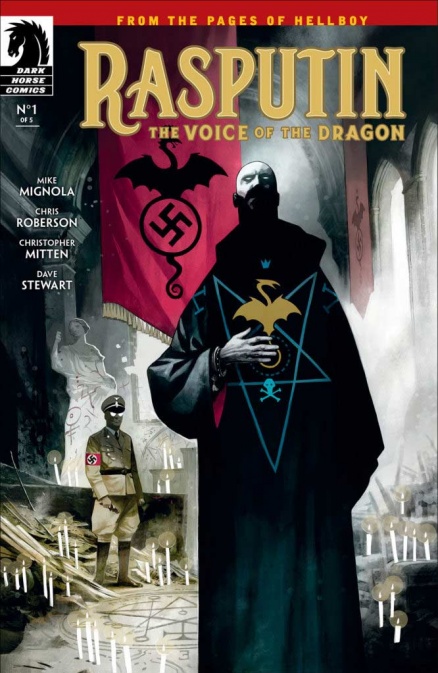 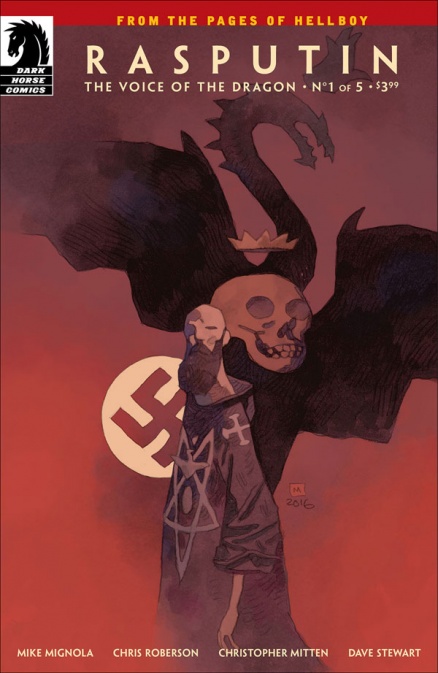 A conspiracy involving the Third Reich and a dead member of a sinister secret society sets Professor Bruttenholm on his first mission—to find the man who’d soon bring Hellboy to earth. The mad Russian sorcerer Rasputin had been thought dead since 1916, when a group of noblemen sought to end his influence over the tsar. Now Rasputin works with the most twisted members of Hitler’s inner circle, and he’s about to cross paths with the man who’ll go on to found the Bureau for Paranormal Research and Defense. 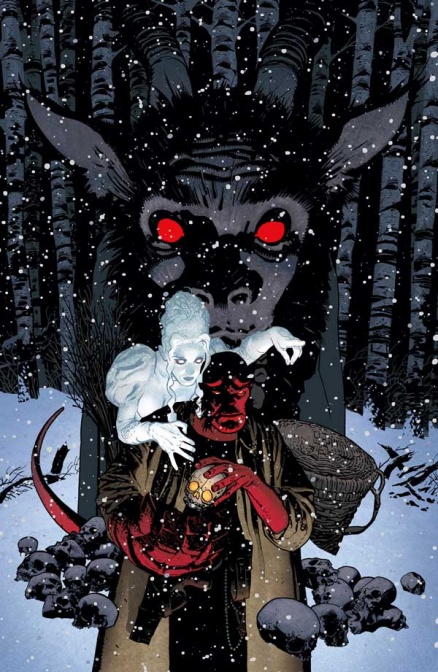 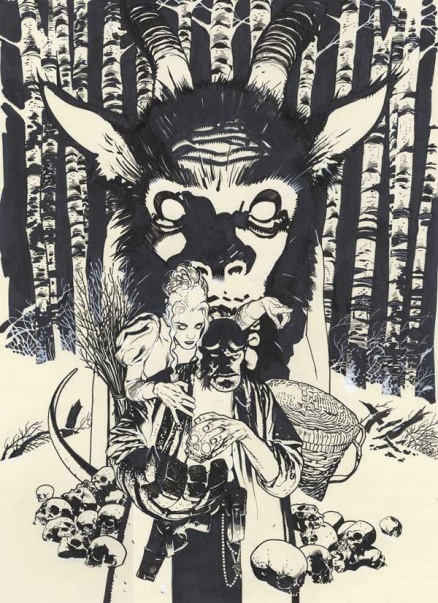 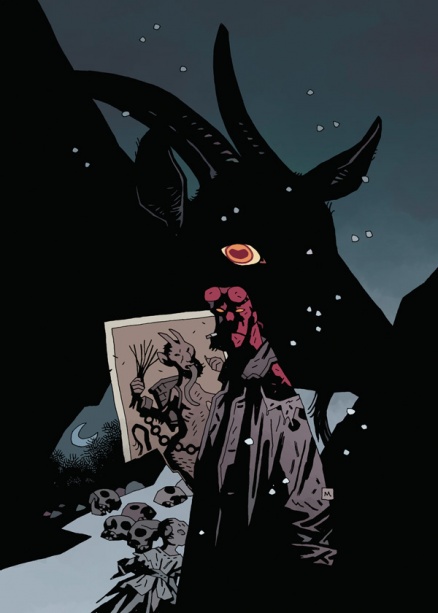 The only thing more exciting than pitting Hellboy against this Satanic spin on Santa is the team-up of Mike Mignola and Adam Hughes. 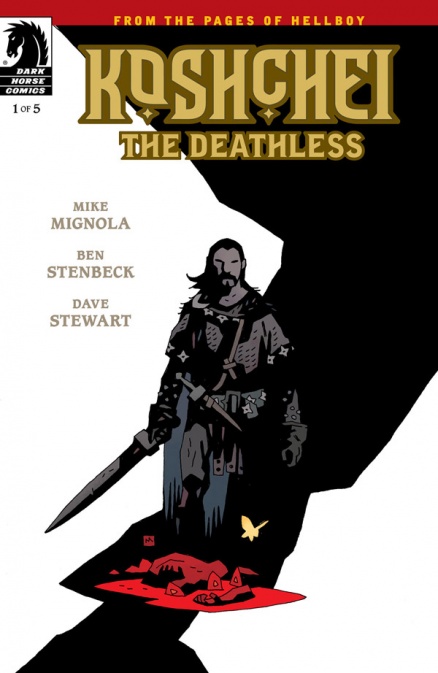 Sent to kill Hellboy by the Baba Yaga in Darkness Calls, Koshchei the Deathless hinted at a long and tragic life before being enslaved to the Russian witch. Now Koshchei relives every horrible act on his road to immortality and beyond, with none other than Hellboy himself—in Hell. Mignola returns to Hell and to the bizarre folklore that’s filled some of his greatest books, reuniting with one of his favorite collaborators, Ben Stenbeck (Frankenstein Underground, Witchfinder: In the Service of Angels, Baltimore).

Phew! Lots of stuff! Now, on to the news… 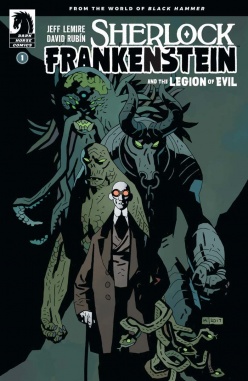 Sherlock Frankenstein
and the Legion of Evil

• “Black Hammer” is getting a spin-off miniseries: “Sherlock Frankenstein and the Legion of Evil”—and they’ll be a Mike Mignola variant cover. ()

• And The Wrap chatted to David Harbour about it.

• Obviously, director Neil Marshall had some things to say too.

• And if there’s anything else you want to know about the movie, Nerdist has likely covered it. (Although I have to contest their description of Hellboy as ‘an almost ageless demon with the mind of the mind of a teenage boy and the attitude to match,’ because that’s strictly a del Toro thing, and that’s certainly not the direction the new film will be going.)

• In news realting to a different movie, there’s going to be a Gotham by Gaslight animated film.

• Chris Roberson did a pair of interviews about “Hellboy and the B.P.R.D.—Occult Intelligence” beginning in September, one with Previews World and another with Newsarama.

• If you missed it, we updated the Hellboy Universe reading order for 2017. We also revealed the upcoming “Lobster Johnson” trade collections.

• With BPRD The Devil You Know” coming up, you may want to catch up on “Hell on Earth.” Dark Horse has a cheap digital bundle that could help..

• There’s a Bernie Wrightson tribute project in the works and Mike Mignola will be a contributor.

• Christopher Golden spoke to Horror News Network about “Joe Golem, Occult Detective,” “Baltimore,” and his work as co-screenwriter on Rise of the Blood Queen. He spoke to Daily Dead about them too.

• Skelton Crew Studio has a B.P.R.D. enamel pin in its store now.

• Patric Reynolds’s work on “Joe Golem” is fantastic, so Dark Horse decided to give us a look at his process. Reynolds has also been putting up some process images on Twitter and Instagram. 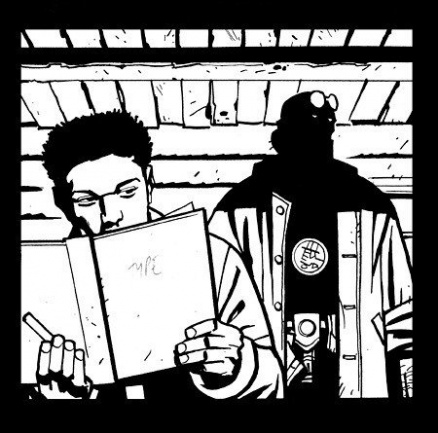