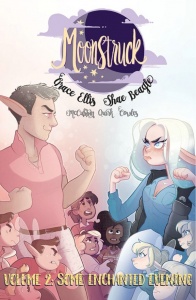 Image Comics have announced Grace Ellis and Shae Beagle’s all-ages series “Moonstruck” will resume in February, transitioning from a monthly comic to a graphic novel series. The second volume, “Moonstruck: Some Enchanted Evening,” will collect the sixth issue of the series – published in June – as well as the rest of the arc that was set to continue rolling out later this month.

“I’m beyond excited for our new trade format,” Ellis said in the press release. “Knowing that readers will be consuming it all at once — trade volumes are so bingeable! — really lets us pry open the world of the book and tell the story of ‘Moonstruck’ the way it deserves to be told.”

“Moonstruck” is set in a world where fantastical creatures live normal, everyday lives with humans, and follows Julie, a werewolf barista, her girlfriend Selena, and their centaur friend Chet. The initial five-issue arc was published from July 2017 to January 2018, and “Some Enchanted Evening” will see the main trio going to a party, “when a conniving fraternity of fairy bros throw a giant wrench into their evening plans. With one of their friends trapped in the frat house and the winter solstice — a notable night of magical mischief — looming ever closer, it’s up to the amorous werewolves and gregarious centaur to save the day.”

This is the latest Image series to switch from a regular schedule, following the “Motor Crush” creative team’s announcement last week that the first issue of the forthcoming story arc had been canceled, and that it would resume next summer in trade. “Moonstruck Vol. 2: Some Enchanted Evening,” meanwhile, will be released February 2019.