We’ve technically already posted this before, but just in case you missed it those two times when we cracked the Da Bendis Code (Da Vinci Code jokes are still relevant, right?), consider this your big SPOILER alert. 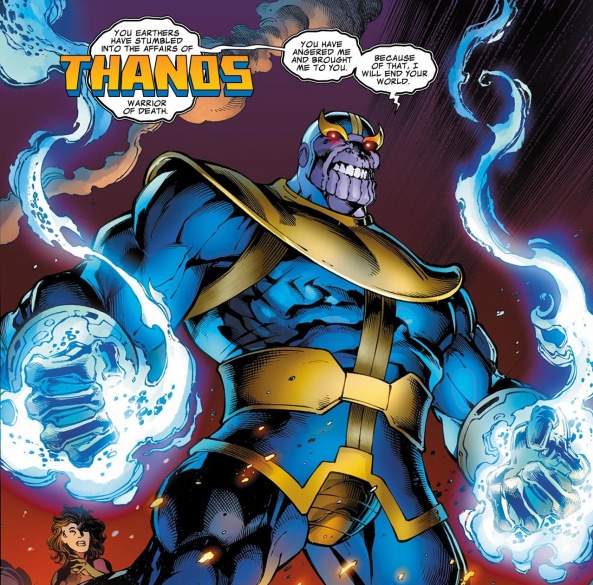 As we’ve mentioned in the past, Thanos showing up makes perfect sense. On the one hand, “Avengers Assemble” seems like the Marvel response to DC’s Bay-esque “Justice League,” which featured Darkseid as the villain in a sea of action and quips to introduce people to their big character. Marvel doing something similar with their new New Reader Friendly Avengers title seems par for course — especially when you look at the other hand and see The Avengers and the litany of people who had no idea who that final villain reveal was. Confused about the big purple smile? Be confused no longer!

So in terms of all the planning and execution that assumedly went into this, Marvel is currently letting loose like crazy, which must be a sigh of relief to all the people who’ve been wanted to shout “THANOS THANOS THANOS!” at the top of their lungs for months now (Bendis assumedly included).

But outside of the obvious, what does this mean? After all, the secret of the Zodiac (i.e. Thanos) reveals what book Bendis is writing next. We can all probably say with confidence now that Bendis is going cosmic, but to what extent? Cosmic Avengers? The return of the Annihilators? A new Nova book? Infinity Gauntlet 2: Electric Boogaloo??

Oh, and where does the Age of Ultron fit into it all?

Only time will tell, but I would bet you ten dollars that the Protector is involved in whatever happens.