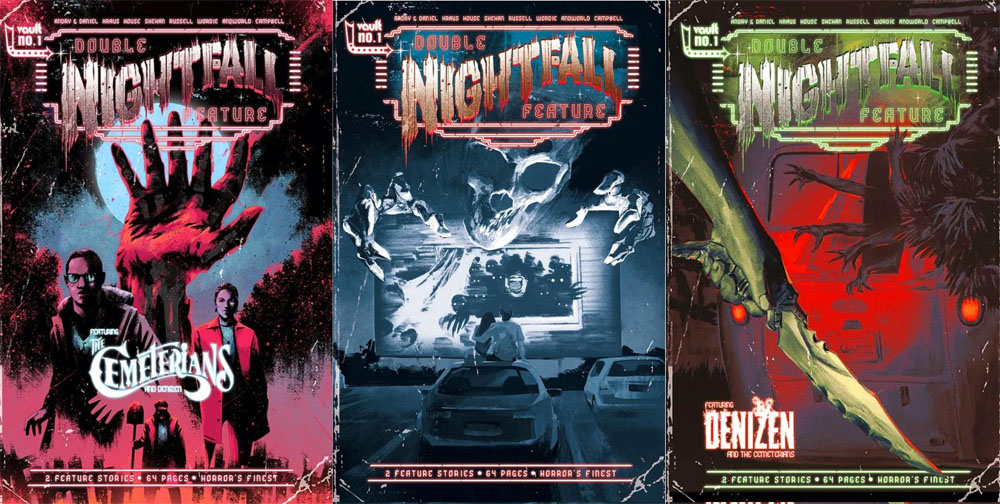 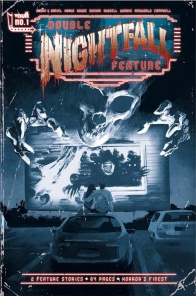 Vault Comics have announced a new addition to their horror line Nightfall for Halloween, titled “Nightfall: Double Feature.” As the name suggests, the series will feature two stories: the first, ‘The Cemeterians,’ by writer Daniel Kraus (“The Autumnal”) and artist Maan House (“Godkillers”), will see “human bones begin growing inside inanimate objects all across the globe, [and] a renegade scientist and brilliant theologian delve into the cemeteries where the bones originated, discovering an otherworldly force tired of being buried in darkness.”

The second, ‘Denizen,’ is written by Tim Daniel (Vault’s EVP of Branding & Design) with art by Chris Shehan (“The Autumnal”), and follows “a family’s cross country road trip [going] off the map and into the unforgiving wilds of Joshua Tree National Park,” where “mom and wife-to-be Helene succumbs to a malevolent force tucked inside an abandoned camping trailer.” Both stories will be full-length, with each issue of the series totaling 64 pages in length.

Tim Daniel describes the book as being part of the fifth anniversary celebrations for Vault, which was founded by Damian and Adrian Wassel, and Nathan Gooden, in 2016. He says, “This October felt like the natural time to remind everyone that Vault horror is not only here to stay, but yet again it will expand the boundaries of our line by introducing a uniquely rewarding new format for our readers. And we assure you, ‘Nightfall: Double Feature’ is more than just a reminder or celebration of bygone success, it is an ambitious nod towards the many more extraordinary things we’ve planned yet to come.”

“Nightfall: Double Feature” #1 will be released on October 26: the primary cover by Maan House will emphasize ‘The Cemeterians,’ and retail for $7.99. Two variants, featuring covers by Shehan and Jason Shawn Alexander (“Killadelphia”), will respectively showcase ‘Denizen’ and the premise as a whole, and will both retail for $9.99.