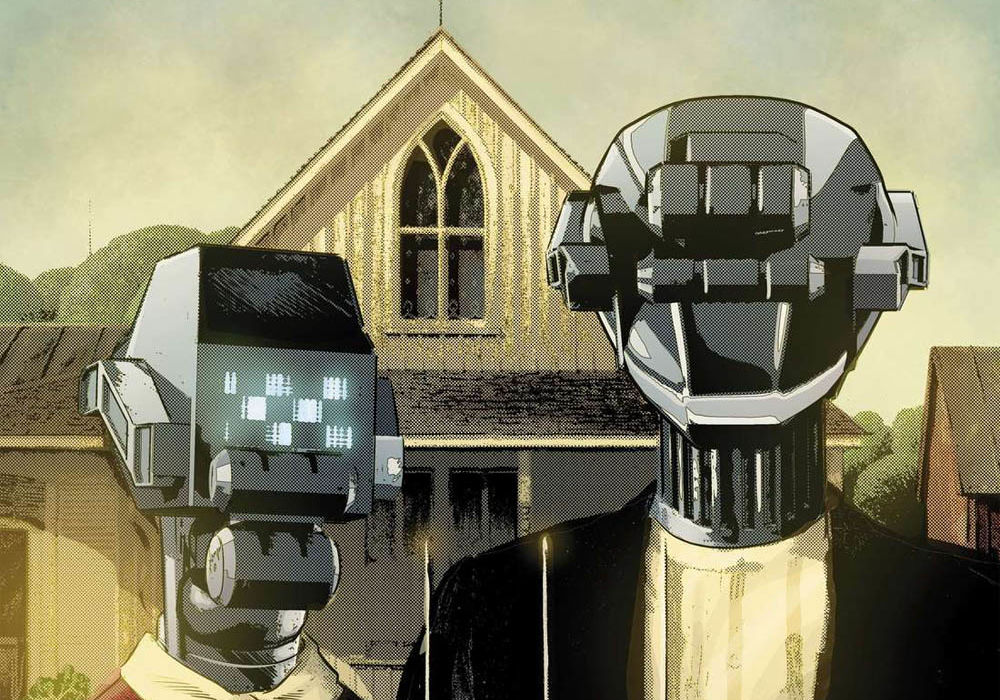 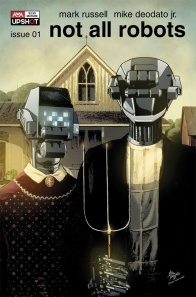 Art by Mike Deodato Jr.
Via Syfy Wire, writer Mark Russell is teaming up with artist Mike Deodato Jr. at publisher AWA Studios for “Not All Robots,” a five-issue sci-fi satire, set in a future where an AI-driven robot workforce has made humanity largely redundant. Specifically, it will focus on Razorball, a robot who has become thoroughly miserable serving a family in Atlanta, and begins to become radicalized by his friends.

In the interview announcing the series, Russell said this is a story about “how the gig economy has sort of destroyed the very people it was supposed to make life easier for,” and how capitalism has led to us “really treating each other like robots. Even though corporate PR and the way we talk [to] customer service has evolved, it’s really just the sugarcoating for ultimately an economy based on treating each other like robots.”

The title is a play on the derisive phrase “not all men.” “That movement,” Russell said, “where people were on Twitter using toxic masculinity to deny the existence of toxic masculinity, I thought, ‘There’s gotta be a really good metaphor for that.’ Those dudes don’t allow themselves to actually see what it is they’re doing. And then it occurred to me that, if you recast the story with robots and then having humans resenting the robots, then it would work as a really good parable for toxic masculinity.”

He said he was unfamiliar with Deodato’s work before the project, and that “he was really an [AWA chief creative officer] Axel Alonso choice. Axel really was hyped on Mike and thought he was a really great artist and he showed me a lot of examples of his work. I was like, ‘Yeah, this guy would be great.’ And he did not disappoint. Right off the bat, he got the initial concept very quickly and we had some discussions over what Atlanta should look like and what the characters should look like, but I didn’t really have to tell him a whole lot. He just sort of intuitively grasped what I was going for with the script. I think he brought like another dimension to it by using a more realistic art style than I had maybe initially envisioned.”

“Not All Robots” #1 will be released in comic book stores on August 8, 2021. For more from Russell and some artwork in the meantime, head to Syfy Wire.