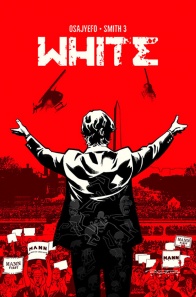 “White” will follow on from the events of “Black,” with X, formerly Kareem Jenkins, now being the face of the resistance against the new President of the United States, Theodore Mann, an individual descending from a family which “exploited empowered blacks for centuries.” In his position of power, Mann has put “controversial measures” into place to restrict the empowered individuals he deems as terrorists, as well as continuing to try to raise support for a “cybernetically-augmented soldier program,” Mann First. The series is the second part of a planned trilogy, and will consist of six issues.

Following the success of “Black” in 2016, there have been three spin-off series published by Black Mask, “Black [AF]: America’s Sweetheart,” “Black [AF]: Widows and Orphans” and “Black [AF]: Devil’s Dye.” The sequel series will be available initially as an exclusive to Kickstarter backers: Osajyefo described how the team want to “keep challenging [themselves], and the publishing paradigm, by making these special first printings of WHITE exclusively available through this crowdfunding campaign.”

The first issue of “White” is estimated to be delivered to backers in October 2019, with the limited edition variant graphic novel and comic book shop retailer bundles being shipped in early 2020. In addition to this, exclusive variant covers from artists including Ashley A. Woods, Jamal Igle, Jeremy Love, ChrisCross, Sanford Greene, and Denys Cowan will also be available via the Kickstarter campaign. Standard editions of the series will be available to order at comic book retailers from Black Mask after the rewards have shipped.

The full press release is as follows.

How Does America React When Only Black People Have Superpowers?

The Sequel to the Acclaimed Graphic Novel and Kickstarter Sensation BLACK

“How does a nation struggling with a history of racial inequality cope in a world where only black people have superpowers?” said Kwanza Osajyefo. “Our story asks: In a time of supposed inclusion and diversity, how far will those in charge push back to retain the status quo?”

In WHITE, Theodore Mann, whose family exploited empowered blacks for centuries, is now President of the United States. Mann’s administration has exacted controversial measures to deal with the empowered he’s deemed terrorists and is stoking national tensions to win public support for Mann First, a cybernetically-augmented soldier program. The main person standing in the President’s way is X – once known as Kareem Jenkins – who has become a symbol of resistance against the Mann Administration.

In 2016, the BLACK Kickstarter campaign was a crowdfunding sensation, and both the campaign and the comic book series’ subsequent publication generated national headlines and coverage including the NEW YORK TIMES, EBONY, ENTERTAINMENT WEEKLY, NEW YORK MAGAZINE, and THE WASHINGTON POST. For WHITE, the original BLACK creative team―Kwanza Osajyefo, Tim Smith 3, Jamal Igle, Khary Randolph, Sarah Litt, Derwin Roberson, and Dave Sharpe―will return for the second part of a planned trilogy, and will be joined by inker Juan Castro. If funded by Kickstarter, WHITE will be a 6-part, ad-free periodical comic book series. The first printing – with variant covers – will be exclusive to Kickstarter backers. Comic book retailers will be able to order standard editions directly from Black Mask after rewards are shipped.

“We’ve been lucky to build the world of BLACK through Kickstarter and at Black Mask Studios, but to continue telling stories the way we want, we need to keep challenging ourselves, and the publishing paradigm, by making these special first printings of WHITE exclusively available through this crowdfunding campaign,” said Kwanza Osajyefo.

The number of backers of WHITE will unlock Kickstarter exclusive variants by comic book industry legends: Ashley A. Woods, Jamal Igle, Jeremy Love, ChrisCross, Sanford Greene, and Denys Cowan. “My goal with the BLACK covers was to evoke an emotion that would stop the reader in their tracks,” said cover artist Khary Randolph. “I’m thrilled that some of the biggest artists in comics will also be a part of the Kickstarter for WHITE.”

Issue One of WHITE is estimated to be delivered to backers October 2019. The limited edition variant of the graphic novel and comic book shop retailer bundles will ship to backers in early 2020.

“We’re thrilled to return to the world of BLACK,” said Tim Smith 3. “This is the second part of a planned trilogy and we can’t tell the story or finish what we’ve started without the support of Kickstarter and our fans who have encouraged us.”

“The overwhelming support we received from the Kickstarter community took us all by surprise,” said Jamal Igle, the artist for WHITE and the creator of MOLLY DANGER. “We were initially a little taken aback by just how much BLACK resonated with readers. As a comic book creator, there’s no better feeling than getting this kind response. Meeting fans of BLACK at comic book conventions and hearing from backers is gratifying and inspiring. We’re thrilled to be back, telling the story in the way we envisioned it, on our terms.”

ABOUT THE WHITE CREATIVE TEAM

Kwanza Osajyefo began his career as an intern at Marvel Comics and worked his way up to digital editor. After leaving comics for a time, Kwanza returned to launch DC Comics’s first webcomics imprint and created the blueprints for their digital comics initiative. Kwanza’s writing draws from the human condition and is centered around characters with unique perspectives and lesser-seen backgrounds.

Tim Smith 3 is the co-creator and designer of BLACK. Tim Smith 3 (A.K.A TS3), has been working in the comic industry for over 15 years. He created and self-published Red After the Party, and has worked on hit titles for some of the biggest publishers in the industry. To see more of TS3’s work, check out: JUNEMOON.NET.

Jamal Igle is a recipient of the Inkpot Award for Outstanding Achievement in Comic Art and the writer/artist/creator of MOLLY DANGER for Action Lab Entertainment. Jamal is the co-creator of VENTURE with writer Jay Faerber; the artist of the series Black from Black Mask Studios; and the penciler of AHOY Comics’ THE WRONG EARTH.

Juan Castro is an inker and illustrator from Tijuana, Mexico, who has been in the comics industry for over 10 years. He has worked on such titles as Transformers, GI Joe, Halo: Escalation, Arrow, Aquaman, Grayson, Batgirl, Sensation Comics Featuring Wonder Woman, and many more. He has been nominated for three Inkwell Awards.

Khary Randolph has been working as a professional illustrator for 2 decades. He has worked for every major publisher and on properties such as X-MEN, SPIDER-MAN, VOLTRON, TEEN TITANS, and TEENAGE MUTANT NINJA TURTLES. While the majority of his output is in comic books, he has also worked in animation, toy design, licensing, and more. He is currently co-creator on the brand new title EXCELLENCE from Image Comics/Skybound Entertainment and is also the award-winning cover artist on the critically-acclaimed comic book BLACK.

Sarah Litt is Editor-at-Large for AHOY Comic Magazines and a former editor at DC/Vertigo. She is the current editor of BLACK and BLACK AF and volunteers with FeLT, an organization dedicated to teaching English to immigrant and refugee women.

WHAT CRITICS ARE SAYING ABOUT BLACK:

“BLACK is at the forefront of social art in comics. If you read one thing, read this.”―DOOM ROCKET

“Brutally encapsulating themes like police brutality and racial profiling, aside from telling a thoroughly grounded superhero story, Black paints an astonishingly vivid and at times ugly picture of the trials and tribulations of African-Americans in modern America, using the power and symbology of superheroes to speak to social injustices that are all too real.”―io9

“Despite new strides in diverse storytelling, superhero comics are still too often a mostly white affair. This comic turns that tradition on its end, envisioning a world where only black people have superpowers.”―ENTERTAINMENT WEEKLY

“There is, unfortunately, no better time for a comic book like BLACK to be announced and created than right now, because the visual of the young Black man wearing a hoodie and being confronted by the gun(s) of police officers is burned into our collective conscious. It is the image of one of the most prevalent and gross generalizations of our times.”―CBR

“Critics have accurately pointed out that these nonwhite characters are all too often written by white creators — and that their stories rarely take on real-life racial issues. Writer Kwanza Osajyefo and artist Jamal Igle want to change all that.”―NEW YORK MAGAZINE’s VULTURE

“An exciting ensemble of black comics creators who are telling a story they’d probably not be able to tell with the “Big Two” publishers.”―MENTAL FLOSS

“Having a black Captain America and a half-black, half-Puerto Rican Spider-Man is great, but where are the superheroes that better reflect the modern day African American? Bringing more diversity to comics, former digital editor at Marvel and DC Comics Kwanza Osajyefo and writer Tim Smith 3 have co-created a graphic novel that takes on issues such as racial profiling from the perspective of its black cast of characters.”―TECH TIMES