In their March 2019 solicitations, Image Comics have announced that Brian K. Vaughan, Cliff Chiang and Matt Wilson’s series “Paper Girls” will conclude with a double-sized 30th issue in July. The solicit for March’s “Paper Girls” #26 reads: 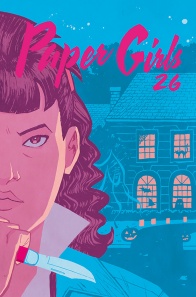 MARCH 06 / 32 pages / FC/ T+ / $3.99
THE COUNTDOWN TO THE SERIES FINALE STARTS HERE! After surviving adventures in their past, present, and future, the Paper Girls of 1988 embark on one last journey — a five-part epic that will conclude with a double-sized 30th issue in July!

Begun in October 2015, “Paper Girls” is set in the ’80s and follows four newspaper delivery girls who get caught up in a conflict between two warring factions of time-travelers. The series won two Eisner Awards in 2016 (for Best New Series and Best Penciller/Inker), and tied for tenth place in our staff’s list of 2018’s ten best ongoing titles.

Image also announced in their solicitations the launch of “Little Bird,” a five-issue series from debut writer/filmmaker Darcy Van Poelgeest, artist Ian Bertram (“House of Penance”), and colorist Matt Hollingsworth (“Seven to Eternity”). The comic follows a young Canadian girl inciting a rebellion against an oppressive American theocracy, drawing on inspiration from topics like the forced conversion of the indigenous peoples to Christianity. The first issue is out March 13, 2019, and you can read an interview with the creators here. And we’ll have more on March’s releases in our Soliciting Multiversity column in the new year.