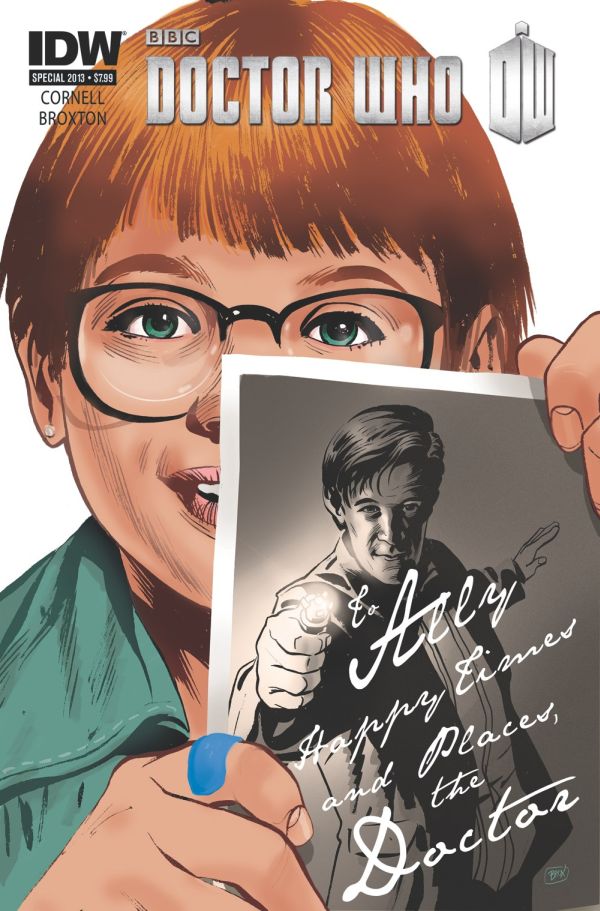 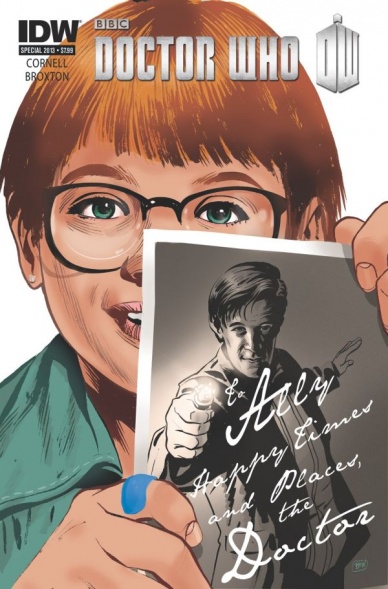 Remember when Paul Cornell wrote for Doctor Who with the Family of Blood episodes in Series 3? Yeah, that was awesome.

Well, guess what? Cornell is back in the Whoniverse, albeit not with the show. Instead, Cornell will be writing a one-shot illustrated by Jimmy Broxton celebrating the Doctor’s 50th Anniversary.

The special, to be released in the last week of December as the cap-off to IDW’s Doctor Who birthday extravaganza, will find the current Smith-itteration of the Doctor transported into our universe. He meets a 10-year-old girl who is a big fan of the show, and he has to come to grips with the fact that he’s a fictional character while meeting face-to-face the actor who portrays him, one Mr. Matt Smith.

Smith’s portrayal of the Doctor can be safely summed up as “mad man in a box,” which Matt Smith in real life is very much not. With Cornell a) having previous Doctor chops under his belt and b) being a damn good writer in general, it’ll be interesting to see his take on the new Doctor. That and it will be awesome to see Broxton’s art again, having previously collaborated with Cornell on the “Knight and Squire” mini for DC — which, if you forget, was awesome.

Am I overusing the word awesome? Perhaps. I’m excited, is all.

So, to recap: Cornell and Broxton together again, The Doctor meets Matt Smith, and it’s a birthday party that you’re invited to. Sounds like a win.

For the full press release from IDW, please see below.

IDW Publishing and BBC Worldwide will conclude their joint celebration of the Doctor’s 50th anniversary with the release of a Doctor Who Special the final week of 2013. This oversize issue will be written by fan-favorite Doctor Who writer Paul Cornell and features art by Jimmy Broxton.

In this special one-shot story, a strange force flings the TARDIS and the Doctor into our own universe! Once here, the Doctor encounters a 10-year-old girl who happens to be a huge fan of the Doctor Who TV show. The Doctor grapples with being a fictional character as well as and a monster lurking at the girl’s school on the way to coming face-to-face with the actor who portrays him, Matt Smith!

BBC Worldwide and IDW have worked together since 2007. For the 50th Anniversary celebration, IDW launched a new ongoing series led by writer Andy Diggle, and the new Doctor Who: Prisoners of Time, an extended maxi-series that spotlights all eleven Doctors. Additionally, IDW brought forth the first-ever Doctor Who crossover in any medium, the 2012 Star Trek: The Next Generation/ Doctor Who event series Assimilation2. The BBC Worldwide/IDW partnership will conclude following the end of these 50th anniversary celebrations in December.

“IDW is a great partner and we’re very proud of the comics that we have created and released together. By extending our partnership, we are able to provide Doctor Who fans with more than 20 additional titles in celebration of the 50th Anniversary,” states Soumya Sriraman, Executive Vice President Home Entertainment and Licensing.

“We’ve been extremely proud to be the American home to new Doctor Who comics these last six years,” said Chris Ryall, IDW’s Chief Creative Officer/Editor-in-Chief. “We feel like we’ve said a great many things with our comics—so it now feels like a good time to let Doctor Who comics regenerate along with the coming new Doctor on the TV series.”

BBC Worldwide will announce the plans for 2014 in the next coming weeks.

September 2013
Doctor Who Special 2013
Continued below

About BBC Worldwide
BBC Worldwide is the main commercial arm and a wholly-owned subsidiary of the British Broadcasting Corporation (BBC). BBC Worldwide Americas brings together all of BBC Worldwide businesses across North and South America. The company exists to maximize the value of the BBC’s assets for the benefit of the UK license payer, and invests in public service programming in return for rights. The company has five core businesses: Channels, Content & Production, Sales & Distribution, Consumer Products and Digital. Under these businesses fall two key brands in the U.S. – digital cable channel BBC AMERICA and BBC Worldwide Productions, the production arm responsible for the smash hit Dancing with the Stars.

IDW is an award-winning publisher of comic books, graphic novels and trade paperbacks, based in San Diego, California. Renowned for its diverse catalog of licensed and independent titles, IDW publishes some of the most successful and popular titles in the industry, including: Hasbro’s The TRANSFORMERS, G.I. JOE and MY LITTLE PONY; Paramount’s Star Trek; Nickelodeon’s Teenage Mutant Ninja Turtles; 2000AD’s Judge Dredd; The Rocketeer; Toho’s Godzilla; Wizards of the Coast’s Magic: The Gathering and Dungeons & Dragons; HBO’s True Blood; and the Eisner-Award winning Locke & Key series, created by best-selling author Joe Hill and artist Gabriel Rodriguez. IDW is also home to the Library of American Comics imprint, which publishes classic comic reprints, and Yoe! Books, a partnership with Yoe! Studio.

IDW’s critically- and fan-acclaimed series are continually moving into new mediums. Currently, Warner Brothers and Barry Sonnenfeld are attached to adapt LORE into a feature film starring Dwayne “The Rock” Johnson and Jerry Bruckheimer Films and Disney are creating a feature film based on World War Robot, with Michael Bay‘s Platinum Dunes and Sony bringing Zombies vs. Robots to film.