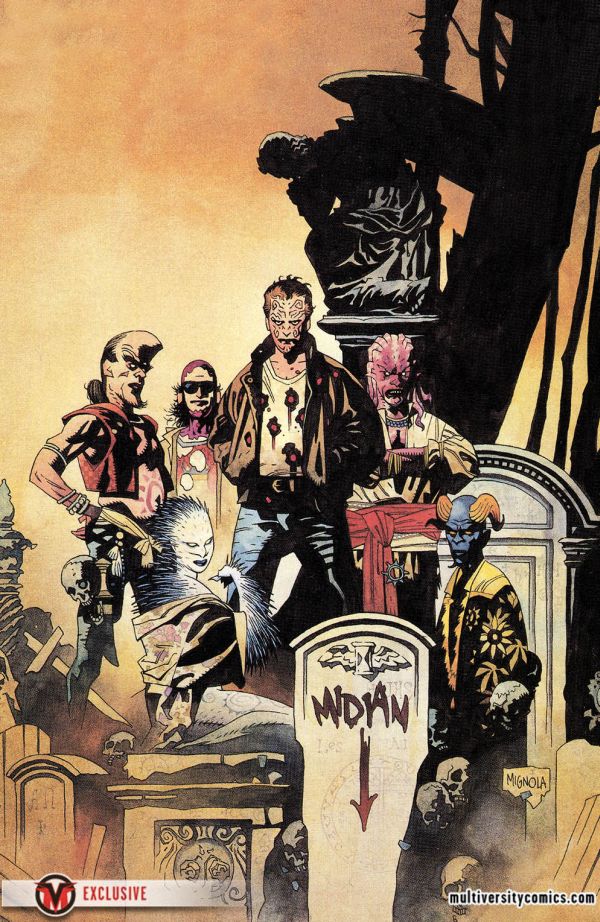 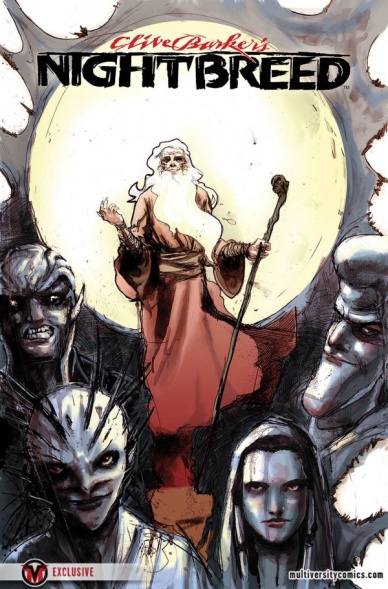 Today we are very pleased and excited to announce exclusively to you that Clive Barker’s Nightbreed is coming to comics.

Fans of early 90’s horror will assuredly remember this creepy film written and directed by Clive Barker himself and starring David Cronenberg, among others. Based on an early novella, the film is a cult horror classic that came out hot on the heels of Hellraiser and its sequel.

Now, comic greats Piotr Kowalski and Marc Andreyko will be adapting and re-imagining “Nighbreed” into an all new comic series, complete with covers by Riley Rossmo, Christopher Mitten and Mike Mignola (the latter two of which are incentive comics). It’s basically a horror film/comic fans dream right here (or is it a nightmare?), and it all comes your way this May.

Read on to take your first look at the upcoming covers to issue #1, as well an illustrated panel by Piotr Kowalski and an interview with Marc and Piotr about the book, Clive Barker and their love of horror. 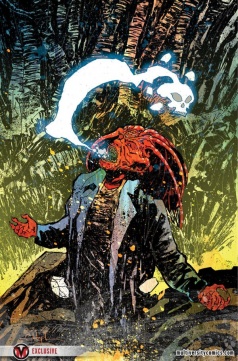 Marc and Piotr, what was the appeal of working on the project? What does “Nightbreed” mean to you?

Marc Andreyko: I’ve been a fan of the film, the novel “Cabal,” and Clive Barker since as long as I can remember. I still have my British import copies of the “Books of Blood” paperbacks! And “Nightbreed” is such a rich, scary, exciting world that to be allowed to play in this sandbox is a thrill. And with the long-awaited director’s cut finally coming out on Blu-ray, a whole new generation will see what the fuss is about (and hopefully pick up the comic)!

Piotr Kowalski: There are three main reasons that made me want to do this project. The first reason is Mr. Barker himself! Taking part in the universe created by him is—and I am sure will be—an amazing adventure. The second reason is BOOM! Studios. They are a group of wonderful people and working for them and with them has always been a real pleasure. And the third reason is this: Nightbreed was the first movie I saw after I bought my first videocasette player. Anybody remember those?

What’s the appeal of working on something created by Clive Barker?

MA: Y’know, there are few writers out there with the world-building skills of Clive. Everything he writes is so instantly “real” and fully realized that it immediately gets your brain going. It truly is an honor to delve into the untold stories of Midian and its residents and with Clive’s blessing? There’s one word for that: awesome.

PK: Well, Mr. Barker is one of the most powerful names in our culture these days. Worlds he has created and characters he has brought to life are very appealing and interesting, especially for somebody like me. I love dark places, tortured souls, fantastic creatures, people tormented by their nightmares. This is a vast field of endless inspiration!

What’s the comic series about? What’s the relationship to the film? Does this story/these stories take place before, during, or after the film?

MA: The first arcs of the book are exploring the origins of some of the most colorful residents of Midian and how they got there. The connective tissue comes from the character of… well, you’ll just have to read the comic! Both the novel and the film are resources I’m using, but to give any more hints would spoil the journey (and do we have some surprises for you!). So, I’m gonna have to be coquettish and say, “You’ll have to read it.”

How would you pitch this to someone who’s never seen Nightbreed?

MA: I’m writing the book to be both fully accessible to new readers and hit the spot for long-time fans of the property. The pitch: Monsters are real and they live in our world. Some in plain sight, others find refuge in the ancient city of Midian. “Nightbreed” will chronicle tales—past and present—of these creatures and how they survive in a world that hates, fears, and wants to destroy them. From ancient Greece to colonial America to the world of today, there be monsters here.

Which characters are you most excited about working on?

MA: There are so many great creations that it’s an embarrassment of riches! I’ve been pouring over my beaten-up copies of “the Making of Nightbreed” book and the Titan “Nightbreed Chronicles” and, I’ve got to say, every single character intrigues me. We are trying to make the book a mix of the fan-faves and some of the lesser-known characters, and Clive has been nothing but supportive.

To me, all the characters of this story seem interesting and frankly speaking, I find it hard to pick my favourites. I look at them all in a very special way. I find them very interesting in a visual sense; all of their physical, unique features and body distortions are a great—but also challenging—gift to any illustrator, to me particularly. 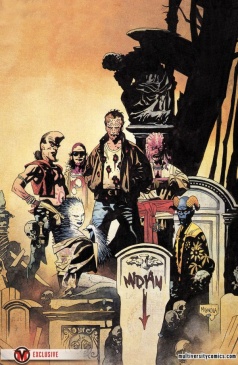 How are you developing some of the fan-favorite and obscure characters?

MA: Well, as I said earlier, the first few arcs chronicle origins and how the characters came to find Midian. All of this has a through line that will lead up to a big reveal down the road. And, as far as developing them, I’m taking what Clive created and extrapolating, expanding, and filling in “lost tales.” And yes, Peloquin is in issue #1.

How have you been enjoying developing some of the characters?

MA: If I was excited when I got the gig (for which I have been bugging [BOOM! Studios Founder and CEO] Ross [Richie] and the BOOM! guys for, literally, years), my excitement grew exponentially when Piotr came on board! I really think he is one of the most exciting talents in comics—as you can see in “Sex” and “Marvel Knights: Hulk. “Having an artist of his caliber makes me want to raise my game and keep up with him. And he might be a bigger “Nightbreed” fanatic than I am, so we’re having fun (and hopefully, a very long run…).

Piotr, obviously, you had a very specific style for “Marvel Knights: Hulk” and “Sex.” How did “Nightbreed” change your approach?

PK: Indeed, I used very specific styles for the “Sex” and “Marvel Knights: Hulk” projects. Neither of them is a horror story so, for “Nightbreed”, I used drawing techniques I had used before for my European comic projects, which dealt with a similar atmosphere and similar topics. In my professional life, I have done two horror stories so far. The first was the “Dracula L’ Immortel” series done for Casterman and the second was the “Malignant Man” miniseries for BOOM! Studios.

What I’ve learned while working in Europe is to follow the subject matter. Let me give you an example. While making a Western comic book one should use and apply certain visual language that would not work in the case of a classic science-fiction book. In other words, you can’t draw horses and spaceships in one style. Keeping that knowledge in mind, I approach “Nightbreed” in a very special way. My drawings have to be moody, gloomy and dark. In this particular case, the strong subject influences the art immensely. 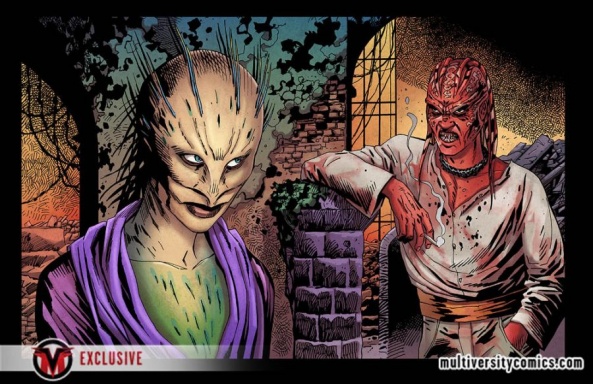 And here’s your solicit:

WHY WE LOVE IT: Comics are full of outcast characters, but this is an outcast story, Clive Barker-style. True to this modern horror master’s other work, NIGHTBREED is full of horrifying creatures that captivated us in the 1990 film and live on in this new story. Plus, writer Marc Andreyko is a HUGE fan of NIGHTBREED!

WHY YOU’LL LOVE IT: Before FABLES, before ONCE UPON A TIME, Clive Barker created a secret town of monsters that live among us. Don’t worry if you’ve never seen the film—Barker and writer Marc Andreyko (BATWOMAN, MANHUNTER) have crafted a story that all horror fans can enjoy. Add to the mix Piotr Kowalski’s art (MARVEL KNIGHTS: HULK, SEX) and this is a story that can’t be missed.

WHAT IT’S ABOUT: The Nightbreed is a secret society of monsters and misfits that hide away from humans, but have been a part of this world since time immemorial. Explore both the past and the present of this clandestine tribe, unleashing new secrets and horrors as they fight to coexist with mankind.

“Nightbreed” by Kowalski and Andreyko debuts in May.