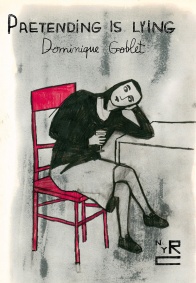 The Bookseller magazine reports Belgian graphic novel “Pretending is Lying” has become the first comic book to win a Translation Prize from the British Society of Authors. San Francisco-based cartoonist Sophie Yanow was awarded the £1000 ($1284.27) Scott Moncrieff Prize for English translations from French, for her work translating Dominique Goblet‘s book, during last night’s ceremony at the British Library in London.

Published by L’Association in French in 2007, “Pretending is Lying” (French: “Faire semblant c’est mentir”) is a graphic memoir in which Goblet explores the most important relationships in her life, namely those with her partner, her daughter, and her parents. Yanow’s translation was published by New York Review Books in 2017, and it is so far the only book by Goblet available in English. The judges praised Yanow for “gracefully taking on the constraints of the pre-drawn speech bubbles as well as the approximations of unsaid feelings and sounds and animal cries.”

Paula Johnson, head of prizes and awards at the society, told attendees that current “inward-looking times” meant translations were “more necessary and more important than ever.” Translators who attended were asked to read from the original text and their own versions, rather than give traditional speeches. You can read about the other winners and the runners-up at the Society of Authors’ website.