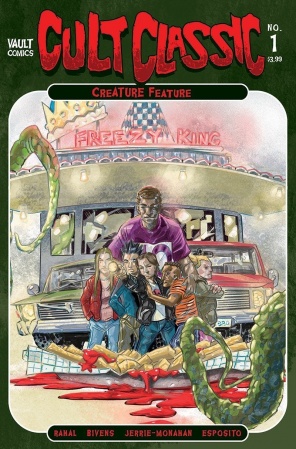 Following up on the soon-to-wrap miniseries “Cult Classic: Return to Whisper,” “Creature Feature” will mash a variety of B-list horror and science fiction tropes into something new, while also telling the story of an All-American athlete out for revenge.

“It’s insanity with consequences,” said Rahal, in a statement to ComicBook.com. “A B-Movie love letter grounded in real human emotion and in-the-moment character decision making all playing out on a ridiculous stage.”

That ridiculous stage will once again be “Cult Classic”‘s shared horror setting, the fictional town of Whisper. This time, Whisper high school student Jarrod Parker will take the spotlight, as he investigates his brother’s gruesome death and battles an alien murder monster, brain slugs, zombie skeletons, and more.

Rahal and Bivens will be joined by colorists Hannah Jerrie (“1985”) and Iris Monahan for the five-issue miniseries, as well as letterer Taylor Esposito (“Cult Classic: Return to Whisper”). While an official release date was not listed for “Cult Classic: Creature Feature,” you should be able to find it in stores this October. In the meantime, you can see unlettered preview pages from the first issue over at ComicBook.com.