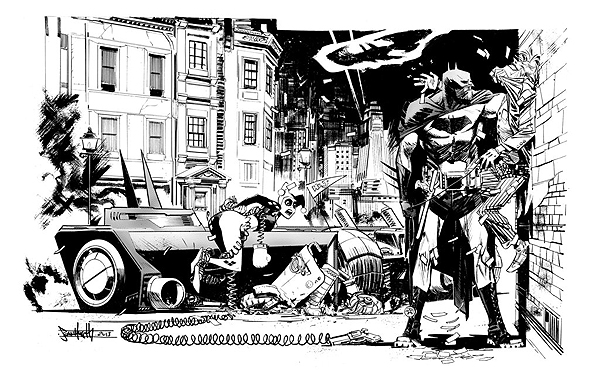 Typically, the news of a couple creators getting together to do a story together isn’t that big of a deal. That happens literally every day, and sometimes passes by without the faintest of tweets drawing our attention its way.

But this isn’t just any team. Scott Snyder shared today that he and his partner on “The Wake”, artist Sean Gordon Murphy, are working together on a sci-fi future Batman story “for something special coming up” as you can see below.

Psyched for my Batman story with @Ssnyder1835 ! It was hard not talking about it for weeks and weeks.

What exactly it will be in and what exactly the details of it are happens to be uncertain at this point, but I can tell you one thing: we will buy the living hell out of whatever it is. We loved Murphy’s Batman work in “Batman Black and White” #1, we love Snyder’s work with the character, and the two of them together? We know that’s dynamite. Really looking forward to finding out more, and we’ll get more information to you as it arrives. While it might not be as crazy awesome as Murphy’s rejected Batman story idea, we really can’t wait.