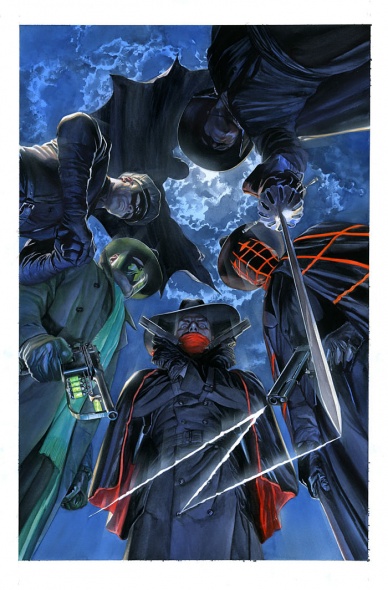 Over at Dynamite Entertainment, they’re currently publishing several licensed comics featuring revivals of pulp characters Green Hornet, the Spider, Zorro and the Shadow, among others. But what would happen if all these characters met? That’s exactly what Chris Roberson and Alex Ross aim to find out.

In a new crossover announced in an interview over at Comic Book Resources, it looks like Roberson and Ross are teaming up to do “Masks,” a new series featuring all of these characters together. Ross, who has been painting Dynamite covers for quite a while now, will be painting the interiors of the first issue, which will be his first interior comic since “Justice,” and it is unknown if he will do more than that.

Roberson will be penning the whole thing, however. As Roberson explains in the interview when asked how it all plays out,

That was one of the first questions I had to answer: if we’re going to have all of these characters in the same story, what are they doing? Why did they meet? Most of these were published by different companies, in some cases in different media whether in pulp or radio, what have you. I struck very quickly the idea of expanding an existing pulp story; there was a three-part series of Spider novels in the Spider magazine about Richard Wentworth, the Spider, dealing with the rise of an American fascist movement. It was very much intended by the writer, Norvell Page, to be an allegory for what was happening in Europe at the time. An organization calling itself the Party of Justice rises to power in New York state and very quickly institutes a fascist police state, and the Spider is forced to go from being a vigilante who operates outside the law fighting crime to a guerilla freedom fighter leading normal citizenry in a fight against the now corrupted officials.

My first thought was, if that’s all happening in New York, what are the other masked heroes in New York doing while that’s going on? “Masks” is the story that spread out of that. If the law becomes corrupted, if the law is unjust, what do people who operate outside the law but fight for justice end up doing?

For the full interview, check Comic Book Resources. The first issue of “Masks” goes on sale in November.