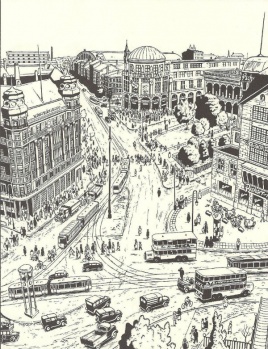 After over 20 years, the final volume of Jason Lutes’s “Berlin” trilogy will be published in 2018. Lutes has been working on the series consistently since its first publication in 1996, originally through 22 magazine-sized issues which were then compiled into a total of three collections.

The series follows the lives of German citizens in Berlin throughout the years 1928 to 1933 as the Weimar Republic fell. Lutes chose to focus on the everyday lives of citizens, where their personal struggles blinded them to the larger political issues occurring around them until the effects entered their lives.

Lutes, an American cartoonist, attended the Rhode Island School of Design before working for Fantagraphics at Seattle. Soon after, he began research for “Berlin,” which became his primary project from that point on.

“Berlin” has been compared to the likes of Italian Neorealist films and pre-French New Wave films. Lutes has cited European comics as a major influences, and has stated that the 1987 Wim Wenders film Wings of Desire particularly influenced his work on “Berlin.”

At DC/Warner Bros.’s San Diego Comic-Con presentation, it was confirmed the DC Extended Universe’s upcoming films will include Shazam, Suicide Squad 2, The Batman, Justice League Dark, Batgirl, Green Lantern Corps, The Flash: Flashpoint, and Wonder Woman II. It appears the Cyborg movie, originally set for 2020, has been delayed indefinitely.Wonder Woman II was all […]