Earlier this year, “Hellicious” launched from SBI – aka the publishing wing of Starburns Industries, producers of Rick and Morty. Today, we can exclusively reveal that there will be an interactive adventure spin-off series. “Pick Your Perdition #1: Seeking Briggy” will drop next summer, from writers Mina Elwell and A.C.Medina and artists Trevor Richardson and Kit Wallis. 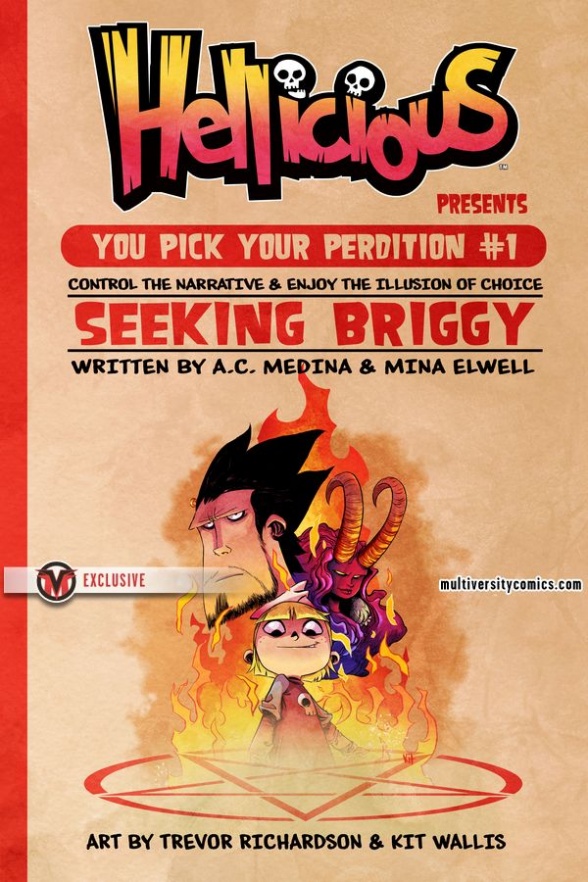 For those unfamiliar with ‘interactive adventure’ stories, they present the reader an opportunity to change the story they are reading, with different outcomes each time you read the book, depending on what choices you make. This book also introduces a Ouija element, furthering the fun and adding another unique element. 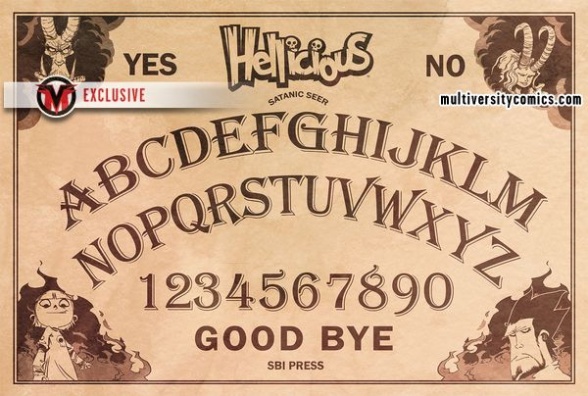 “Hellicious” will also be continuing past its initial 6-issue run, with new issues dropping in Spring of 2019. So, check out the press release below, and if you’re at New York Comic Con this weekend, stop by the SBI table in Artists Alley! 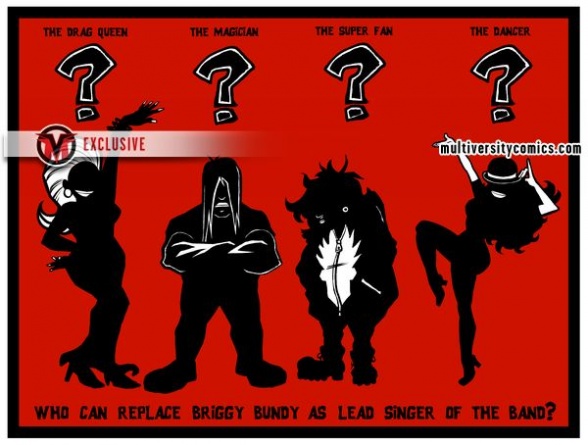 SBI Press, the publishing arm of Starburns Industries, who brought you Rick and Morty, has announced for NYCC 2018 the continuation of their fan-favorite comic series Hellicious with an all-new miniseries, and its first spin off book, Pick Your Perdition #1: Seeking Briggy, an interactive adventure comic set in the universe of Hellicious.

Following the untimely demise of goth rocker, Briggy Bundy, his surviving band has been left with a great big iconic lead singer-sized hole in their lives which they desperately need to fill. You, the reader, can help the band try to survive the loss of their legendary star by becoming the new frontman of Briggy Bundy’s band, but unfortunately the fans aren’t interested in change and will only accept the original Briggy. If you’re going to be a success, you’ll need the help of Briggy himself and all the supernatural powers to intercede on your behalf.

With the help of a Spirit Board, conjure up the Forces of Hell in search of Briggy, summon him from beyond the grave, and learn from the spirit of the man himself to learn how to keep the Briggy Bundy legacy alive.

Begun in July 2018, “Hellicious” is set in a vast reimagining of Hell and focuses on the lives of Cherry, her mother, Sin, and her grandfather, The Devil himself. When Cherry decided to “adopt” the recently departed soul of Briggy Bundy as her new best friend for eternity, she knew she had to contend with the forces of the afterlife that would say, “No, you can’t keep a human soul to be your playmate,” but she also left behind a void on Earth. Fans, bandmates, and the world of music at large miss Briggy and want more. Step into the fray, talk to the dead, plead with demons and spirits, and try to do the impossible – salvage a band when its frontman goes the way of so many who lived fast and died young before him. Choose from four characters – a drag queen, a Coney Island magician, the uber Briggy Bundy fan, or a happy-go-lucky burlesque dancer – to find your way through 24 different potential endings that will most likely wind up putting you a little closer to Briggy than you would like.

“I spent half my childhood dying endlessly in [these type of] books,” said series writer Mina Elwell, “Luckily our comic takes place mostly in the afterlife, so you won’t have to deal with that pesky ‘you are dead.’ too much…”

Fans of these types of books, newcomers to this form of storytelling, and fans of Hellicious’ dark humor will all find something special to love in this new book from SBI Press, just announced in time for New York Comic Con and set for release summer 2019.

“I’ve wanted to do a book like this since joining Starburns,” said SBI Press VP of Acquisitions and Hellicious editor, Trevor Richardson, “It couldn’t be more fitting that we’re announcing it on the one year anniversary of Starburns discovering Hellicious and at the very convention where I first met the Hellicious team. New York Comic Con is a special place where great things continue to happen for Starburns Industries Press. We can’t wait to bring this awesome Hellicious adventure to life in a style of storytelling that is both fresh and nostalgic at the same time.”

With art by series visionary Kit Wallis and series editor, Trevor Richardson, teaming up for the first time, this book represents a joining of creativity from a family of creators who love to work and play in the world of Hellicious. Richardson added, “This book represents SBI Press’ belief in Hellicious as a new brand with a long future in comics and media, we are doubling down on this title by creating an important companion piece that will expand the lore of Briggy, Cherry, and what happened as a result of their fateful meeting. And I am thrilled to step out from behind the scenes to work alongside Kit, Alan, and Mina to help create the kind of book I’ve wanted to make since breaking into comics.”

Teaming up with Fernando Pinto, contributing artist to SBI Press’ “Fantasmagoria,” in Artists Alley at NYCC. Stop by K-15 to visit A.C. Medina, Mina Elwell, Trevor Richardson, and Fernando Pinto and pick up copies of Hellicious Volume 1, Fantasmagoria #1, art prints and more from Fernando, and more swag from Starburns Industries this weekend!

Starburns Industries is an innovative and imaginative full-service production company, specializing in stop-motion, traditional 2D, and CG animation as well as live-action production. Starburns is a creator driven studio, whose founders are responsible for the creation of Adult Swim series like “Morel Orel”, “Mary Shelley’s Frankenhole” and “Rick & Morty”; as well as the Academy Award nominated animated film “Anomalisa” and the upcoming Netflix animated feature film “Bubbles”.

Launched in the summer of 2010 to produce the Emmy Award© winning “Community” holiday special, Starburns has created a workspace that gives the support and freedom to original and creative people to make content that is funny, strange, sad and beautiful.”

Inquiries regarding interviews, review materials, licensing opportunities, or general information should be pursued using the below information.