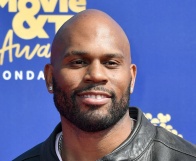 Shad Gaspard at the 2019
MTV Movie & TV Awards
The Associated Press reports wrestler, actor and writer Shad Gaspard has died at the age of 39. Gaspard went missing on Sunday, May 17, after he went swimming with his 10-year-old son, Aryeh, in Venice Beach, Los Angeles. According to WWE, Gaspard assisted in the rescue of his son and several other swimmers after they became caught up during that day’s strong currents, but he was swept out to sea after a wave crashed over him. His body was reportedly found washed ashore in the early hours of this morning. A spokesperson said, “The decedent was identified as Shad Gaspard and next of kin was notified.”

Gaspard was born in Brooklyn, New York, on January 13, 1981. He played basketball at Georgia Perimeter College in Atlanta, and after leaving, worked as a bodyguard for celebrities like Britney Spears, Puff Daddy, and Mike Tyson. He auditioned to become a professional wrestler by 2002, and a few years after being recruited by a WWF talent scout, he joined the WWE under his real name. He and JTG formed Cryme Tyme, a tag team whose theme was an over-the-top parody of stereotypical street thugs: the duo performed alternately on the independent circuit and for WWE from 2007 to 2020.

He and fellow wrestler Marc Copani (aka Muhammad Hassan) wrote the graphic novel “Assassin and Son: Path of Vengeance,” illustrated by Elder Messiah. The crowdfunded comic, which Scout Comics acquired the single market rights to last year, tells the story of an assassin who goes into hiding with his son after his wife is murdered. 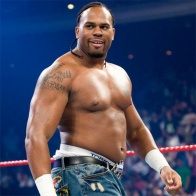 Gaspard in the ring

Gaspard, while commenting on his plans for the comic to become a franchise in 2012, said the project began life as a screenplay at Lionsgate, but they went the comic book route after the studio decided they wanted to make the film a PG-13. “A lot of comments came in from people who were in the industry that two guys, who are professional wrestlers for one, shouldn’t be writing a comic,” he said. “I’m a comic book fan first, ok? I love comics, I love video games and that’s my passion. My job is an entertainer. Don’t judge me on my job.”

His other ventures included acting roles in Think Like a Man Too, Get Hard, Key & Peele, From Dusk till Dawn: The Series, and The Last Sharknado: It’s About Time. He worked as a stunt performer on this year’s Birds of Prey, and in motion capture for the 2016 video game Batman: The Enemy Within, as well as 2018’s God of War.

He also took to the stage in 2013, portraying Jack Johnson, the first African-American world heavyweight boxing champion, in the play Pugilist, and performed a real act of heroism in 2016, when he prevented the armed robbery of a gas station in Coral Springs, Florida, disarming and restraining the perpetrator until authorities arrived.

Gaspard is survived by his wife Siliana, a trainer and nutritionist, and their son. Tributes have been paid by Dwayne “The Rock” Johnson, Vince McMahon, and Triple H, while JTG shared his last text message from his teammate, which reads, “If ever I die tomorrow just know I love you as a brother and friend for ever, even past this life.”

Writer and poet Dorian J. Sinnott shared on Twitter that his grandfather, longtime Marvel Comics artist and inker, Joe Sinnott has died. “He passed away this morning, June 25th,” he said, “at 8:40am at the age of 93. He enjoyed life and was drawing up until the end. RIP, Poppy.”Joe Sinnott was born on October […]

Newsarama reports legendary “Batman” writer and editor, Dennis “Denny” O’Neil, has died at the age of 81. According to his family, he passed away at home, from natural causes, on the night of June 11.Dennis J. O’Neil was born in St. Louis, Missouri on May 3, 1939. He studied English literature, creative writing and philosophy […]

Sportswriter and cartoonist Murray Olderman, whose caricatures of sports figures were featured attractions in newspapers across America for decades, has died at the age of 98, The New York Times reports.A journalist, columnist, and caricaturist whose pen captured the sports world in newspapers for more than 60 years, the advent of television and the digital […]