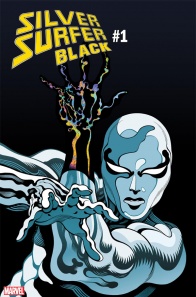 Cover by Tradd Moore
Marvel Comics have announced “Silver Surfer: Black,” a new solo miniseries for the Herald of Galactus written by current “Guardians of the Galaxy” scribe Donny Cates, and illustrated by Tradd Moore (“Secret Warriors”). The series will follow on from the first issue of Cates’s “Guardians,” where Norrin Radd was one of a number of heroes sucked into a wormhole detonated by Thanos’s Black Order.

Editor Darren Shan said, “When Donny Cates wrote the first issue of the new ‘Guardians of the Galaxy’ series, we both agreed that Silver Surfer’s adventure wasn’t going to end there, that there was still more story to be told about what happened to all the cosmic heroes that got sucked into the Black Order’s wormhole. But Donny’s imagination really kicked into gear when artist Tradd Moore signed on!” He added, “‘Silver Surfer: Black’ is a culmination of everything Donny has been writing since his ‘Thanos’ run,” referencing the black matter-infused version of the character Cates and Geoff Shaw introduced in the nightmarish future of ‘Thanos Wins.’

“Silver Surfer: Black” #1 will be released in June, and have a variant cover by Nick Bradshaw. Marvel have also announced a “Guardians of the Galaxy Annual,” due out the same month, in which Cosmo the Spacedog will reveal what happened to Nova, Quasar, Adam Warlock, and Darkhawk after they were sucked into the wormhole: that will be written by Cates, Al Ewing, Tini Howard, Zac Thompson and Lonnie Nadler, and have art by Yildiray Cinar, Ibrahim Moustafa, Felipe Andrade and more, as well as a cover by Giuseppe Camuncoli.