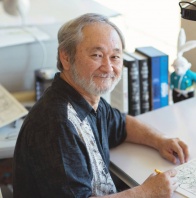 In a statement supporting the award, Bill Sienkiewicz, the artist of “Elektra: Assassin,” said, “Stan Sakai is a personal hero of mine, the epitome of what one person with a unique vision can do creatively. His singular commitment to his art, and story, mainly via his brilliant ‘Usagi Yojimbo,’ should be inspiring to anyone with their own story to tell. This is how you do it. You commit, every single day. So here we are, 34 years later, enriched by his wonderful tapestry of humour, wit, empathy, artistry and history. And thankfully, there is so much more to come from him.”

David Mack, creator of “Kabuki,” added, “Stan is such a great choice to receive this award. He’s been such a great example of a creator having a vision and seeing it through. I had the good fortune to do some signings in Paris with Stan many years ago, and meeting him very early in my career. In addition to his work and commitment to his work being a guiding example of a creator manifesting his vision, as a person, he has always been kind and nurturing to new comic creators as well.”

The Joe Kubert Distinguished Storyteller Award was created this year by the Kubert School and Atomic Crush Events, in tribute to the work of Kubert, who passed away in 2012. The award is given to a creator who not only produces high quality work, but also is committed to helping the whole comic book community at large, with a focus on helping new creators.

Stan Sakai was born in Kyoto, Japan. He began his career by lettering comic books in the early 1980s, starting with Pacific Comics’s “Groo the Wanderer,” written by Sergio Aragonés and co-plotted by Mark Evanier. Sakai became famous with the creation of “Usagi Yojimbo.” This epic saga is set in the late 16th/early 17th century Japan, and follows an anthropomorphic Rabbit rōnin named Miyamoto Usagi. First published by Fantagraphics in 1986, it moved to Mirage Comics in 1993 and then Dark Horse Comics in 1996, where the comic is still going with Sakai as sole artist and writer. The latest issue, “Usagi Yojimbo: The Hidden” #4, is out June 20th.