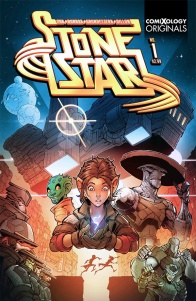 ComiXology Originals have surprise dropped the first issue of “Stone Star,” a new five-issue series from writer Jim Zub, artist Max Dunbar, colorist Espen Grundetjern, and letterer Marshall Dillon. A space fantasy, the comic revolves around the titular mobile asteroid, which hosts gladiatorial tournaments, and a young thief named Dail, who discovers a dark secret in the depths of the Stone Star: now Dail “has to decide where his destiny lies – staying hidden in the shadows or standing tall in the searing spotlight of the arena. Either way, his life, and the cosmos itself, will never be the same!”

On Patreon, Zub stated, “If you’ve enjoyed my work on ‘Street Fighter,’ ‘Champions,’ or ‘Wayward,’ then I think ‘Stone Star’ is going to hit the spot. Max, Espen, and Marshall are delivering their very best on every page and that momentum has helped push me to give them crazy and fun stuff to illustrate. It’s classic teen adventure in a vibrant setting, filled with twists and turns.” Zub and Dunbar, who have collaborated previously on various IDW “Dungeons & Dragons” titles and “Champions,” will promote the title at WonderCon this weekend at Booth 2151, where they will give away a free limited edition screen print of the first issue.

You can read an extended preview of the first issue now at io9. Like all comiXology Originals, “Stone Star” is available to all comiXology, Prime Reading, and Kindle Unlimited subscribers at no extra cost, while the print collection will be exclusive to Amazon. The next four issues of “Stone Star” will follow at the end of each month, with the digital/print trade due for release on August 28.