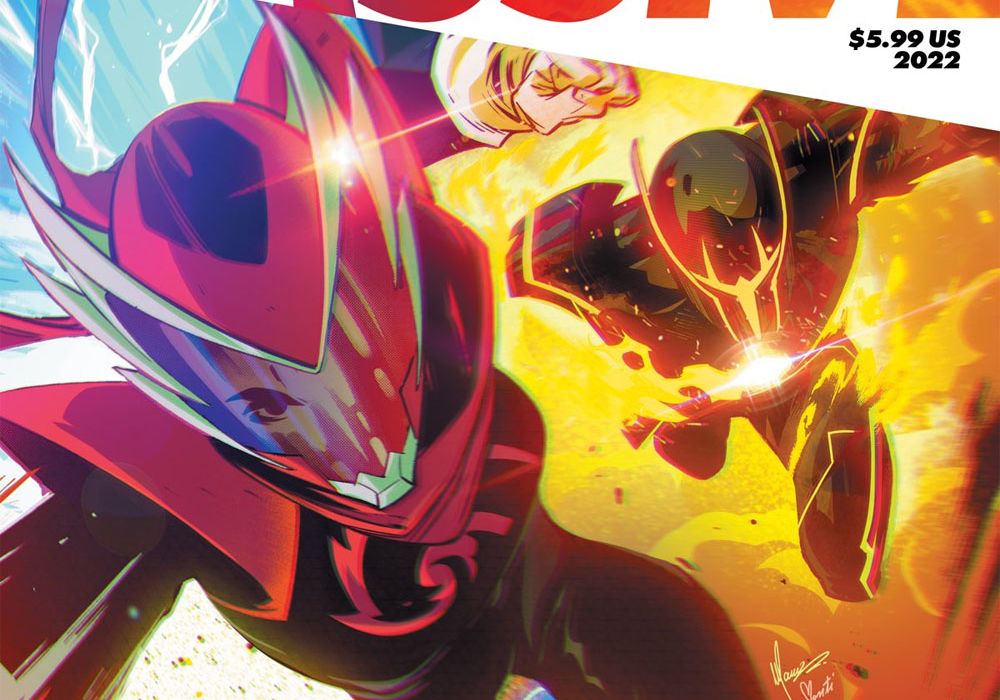 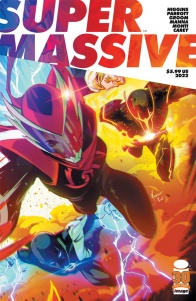 Image Comics have announced that Kyle Higgins and Marcelo Costa’s sentai-inspired superhero series “Radiant Black” is expanding into a shared universe. February 2022 will see the release of “Supermassive,” a crossover one-shot that introduces the heroes Rogue Sun and Inferno Girl Red. It will be written by Higgins, Ryan Parrott, and Mat Groom, with art by Francesco Manna, and colors by Igor Monti.

A “Rogue Sun” series, written by Parrott with art by Abel (“Harley Quinn,” “Crimes of Passion”), and colors by Chris O’Halloran (“Ice Cream Man”), will then launch on February 16. The book’s protagonist is a rebellious teenager named Dylan Siegel, who discovers his estranged father, Marcus, was the late superhero Rogue Sun, and that he has inherited his powers. “Tasked with protecting our world from the forces of the supernatural — and solving his father’s murder — Dylan will be forced to come to terms with the man he’s spent the majority of his life hating,” says the synopsis.

“Inferno Girl Red,” by Mat Groom, artist Erica D’Urso, colorist Igor Monti, and letterer Becca Carey, will be published by Image later next year. Originally crowdfunded on Kickstarter, the book follows Cássia Costa, a girl at a prestigious boarding school, who becomes attached to a magical dragon bracelet when an ancient cult and their army of demons invade the city. 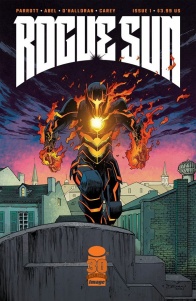 Higgins commented, “Thirty years ago, Image changed the superhero game. This February, we’re excited to help kick off the next stage of where creator-owned superheroes can go.” Groom, who co-wrote Marvel’s “Ultraman” with Higgins, said “I think anybody who has been reading ‘Radiant Black’ can attest to the fact that Kyle and Marcelo have been living up to this responsibility — and I see ‘Supermassive’ as not only continuing this, but escalating it dramatically. There’s a reason we gave it that name!”

Parrott, who collaborated with Higgins on BOOM! Studios’ “Power Rangers” comics, said “To me, the beauty of the original Image shared superhero universe was that it was modern, accessible and free from the weight of massive corporate oversight. It felt like it was just a bunch of friends telling stories together and we wanted ‘Supermassive’ to encapsulate that same spirit.” Manna said, “One of the things I love most in the world of comics is the feeling between creators working on a project. It’s a synergy that drives every story and every page to its best. That’s what brings Kyle, Mat and I together again for this ‘Supermassive’ story.”

For more from the creators, and covers as well as interior art, head to Image’s press release. “Supermassive” goes on sale February 2, and will retail for $5.99, while “Rogue Sun” will be sold for the regular price of $3.99.