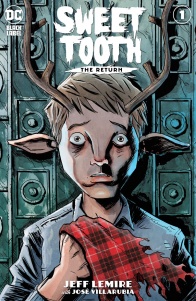 Cartoonist Jeff Lemire (“Frogcatchers,” “Royal City”) and colorist José Villarubia are coming together at DC Black Label for the arrival of a new antlered messiah in “Sweet Tooth: The Return.” The six-issue miniseries is set years after the end of “Sweet Tooth,” in a world where the once-oppressed hybrids have now become oppressors of the last humans themselves.

The book will transplant and homage elements from the original series into a world now much closer to a post-apocalypse than the plague-induced desolation of the original series. Once again, the hybrid child at the center of the series is plagued by prophetic dreams, and is believed to be the messiah for the dying race of humans.

The original “Sweet Tooth” ran for 40 issues, and was almost entirely written and illustrated by Lemire from 2009-2013. It was announced earlier this year that the series would be adapted for TV by Netflix and Robert Downey Jr’s production company Team Downey. Lemire previously cited this as inspiration for the revival series.

The 17+ “Sweet Tooth: The Return” #1 releases from DC Black Label on November 3, with a main cover by Lemire, and a variant by Jim Lee.

Once upon a time there was a little boy named Gus. He had antlers and lived with his father in a little cabin in the woods. Then his father died, and the big man with cold eyes took Gus away. Gus went on many great adventures, found friends, love, happiness, family, and acceptance.

Now, years later…it begins again. A young boy with antlers and deer-like feature wakes in a bizarre and completely foreign world where the last humans struggle to survive. They tell the boy he is special, he is chosen, and that he alone can lead them back to a world dominated by the oppressive Hybrids.

Sweet Tooth: The Return is no re-hash of the original series, but rather a bold re-imagining of the Sweet Tooth mythology; taking elements of the original series and remixing them into something familiar, but totally new. A divided world. A planet long ago past the point of devastation. And at the center of it all, a child who didn’t ask to be born into any of this, but who has no choice but to try and forge some life for himself. His visions and dreams may not be real at all…they may just be fiction. But they are hope. And sometimes hope is enough.

Acclaimed writer/artist Jeff Lemire returns with colorist José Villarubia to bring you the next chapter in the saga of DC’s acclaimed series Sweet Tooth!

Sweet Tooth: The Return #1, with a cover by creator Jeff Lemire and a card stock variant cover by Jim Lee, debuts November 3. New issues will ship monthly and the series will carry DC’s Black Label content descriptor, indicating content appropriate for readers 17+. For more information on this series and the World’s Greatest Super Heroes, visit the website at www.dccomics.com, or follow on social media @DCComics and @thedcnation. 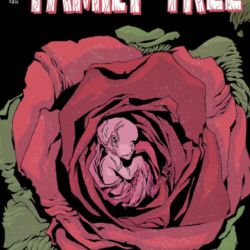 “Family Tree” #7 gives us a glimpse of Josh in the apocalypse and flashes back to keep the action and mystery rolling with perfect pacing. Warning: spoilers ahead.Written by Jeff LemireIllustrated by Phil Hester, Eric Gapstur & Ryan CodyLettered by Steve Wands As Josh struggles to survive in the verdant wasteland that the world has […] 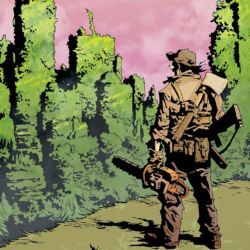 When we first reviewed “Family Tree” late last year, we lauded it highly. The story had all the marks of top shelf Lemire: its ability to say a lot with a little, its focus on a rural family in distress, and its singular, total cohesion. As the story continued, things only got better. In the […] 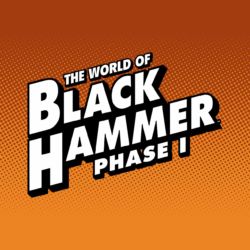