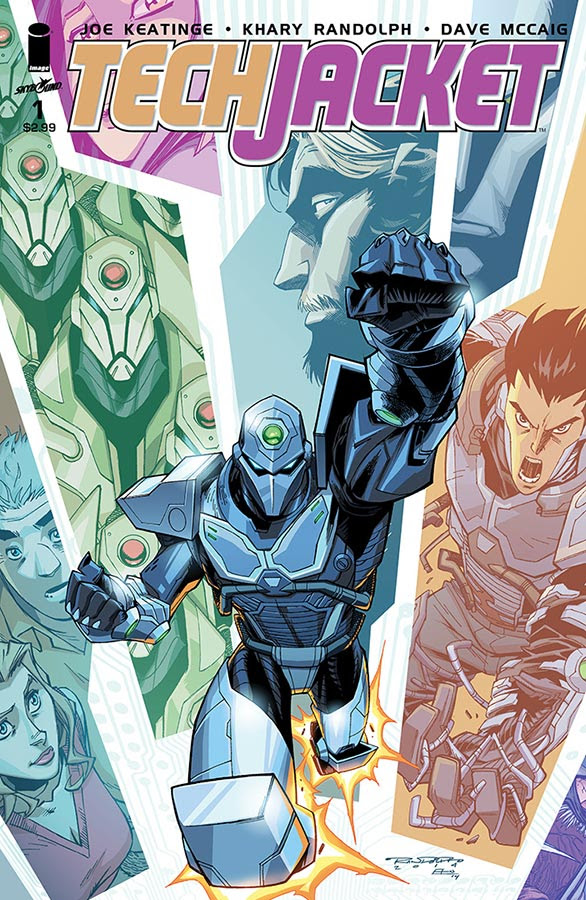 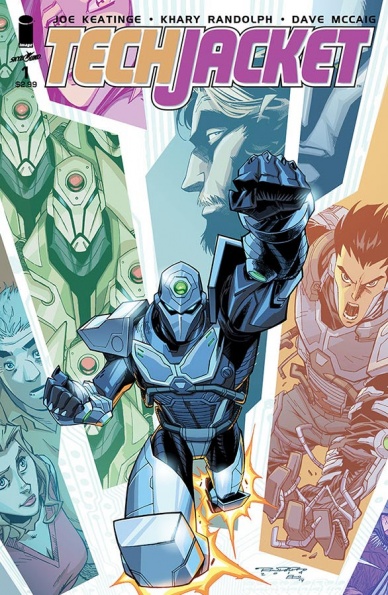 At Image Expo, Image launched a three-issue digital-only mini series starring Tech Jacket, written by Joe Keatinge and illustrated by Khary Randolph. Picking up both after the character’s original series and his revival during ‘the Viltrumite War’ (via back-ups in the pages of “Invincible”), the book was a new life for the character, albeit a short one — and one we wanted to see continue.

Launching in July, “Tech Jacket” will be launching from the same creative team of Joe Keatinge and Khary Randolph. A brand new ongoing series, the book will follow the continued adventures of Zack Thompson as he finds his place in the ever-expanding “Invincible” shared-universe.

Not only that, but I’m told by Keatinge that the digital mini-series will also be collected alongside all of the ‘Viltrumite War’ back-ups into the “Tech Jacket” Volume 2 trade paperback, which is aiming to be out in July alongside the new ongoing.

The digital mini-series was a great return to character in very much in the vein of what Kirkman had done with the character, let alone what he’d launched with “Invincible,” and we’re looking forward to seeing more of their collaboration. This is definitely something to look forward to, both for fans of the character and those who are familiar with Keatinge and Randolph’s other work in comics. The revival of “Glory” Keatinge wrote seems to bode well for this, I’d imagine, and generally speaking there’s nothing I wouldn’t pay to see Khary Randolph draw, so.

For the full press release from Image Comics, please see below.

Skybound/Image Comics announced Friday at their Emerald City Comic Convention panel that TECH JACKET will return as an all new ongoing series.

After the tremendous sales of the TECH JACKET DIGITAL miniseries that debuted at Image Expo, Joe Keatinge (SHUTTER, GLORY) and Khary Randolph (Deadpool, Justice League Beyond) team up once again to launch Zack Thompson a.k.a. Tech Jacket into an ongoing print series with a July 2014 release.

“After the success of the miniseries, Skybound was excited to get more Tech Jacket out there and with Khary on board, I’m on board,” said Keatinge. “Whether or not people read the past series, the DIGITAL miniseries, or none of it, they’re in for what’s going to be the biggest scale science-fiction series I’ve worked on yet. Extremely excited to do so with Khary, Robert Kirkman, and company!”

“This project is a dream come true for me,” added Randolph. “Working with Joe, Robert Kirkman, and the rest of the Skybound family has been a blast and I’m sure the fans will see how much fun we are having on this series. If you like action, adventure and excitement then you will love TECH JACKET.”

In celebration of launching the new series, Image Comics will be offering an exclusive discount on Comixology. Get issues of TECH JACKET and associated Skybound series INVINCIBLE UNIVERSE, GUARDIANS OF THE GLOBE, SCIENCE DOG, THE ASTOUNDING WOLF-MAN, and more for only $0.99, with collections up to 50% off. Sale ends at 11 p.m. EST on 3/30.