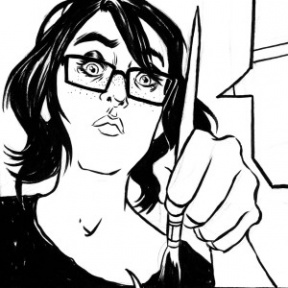 In a recent Twitter discussion sparked by Brandon Graham (part of which Sam discussed in her piece yesterday on women in the industry), artist Tess Fowler joined in order to discuss the actions of a particular creator (whose name is never directly mentioned) she had dealt with early in her career. It was an upsetting story, to say the least.

After collecting some of her original thoughts, a lot of which sparked various discussions, Tess took to Twitter last night to discuss her statements and the issues. We’re presenting it collected for you here, commentary free. It’s a very interesting read, and one worth thinking on:

I don’t hate men in comics as a whole. I met some awesome pros along my journey. #1 on the list of men who have always looked after the womenfolk? Tony Parker. Kevin Eastman brought me in, gave me my foot in the door and took care of me. Lorenzo Sperlonga, too. Craig Hamilton is another awesome guy. Joe Phillips too. I’ve met some awful men. But I’ve met some random gems too. George Perez is one. Joshua Dysart is another. Good men. Strong men all. And madly skilled.

If you’re male and a comic book pro I’m asking you to listen now. It’s just you and me here. I don’t want a job. I make my own way in the world and now that I’m free I don’t know if I’ll ever go back. This isn’t about my career. This is about the fact that the world is watching/ The boom has happened. The industry isn’t what it was in the golden years or even in the Image renaissance. This is big, brother. And more and more little girls are growing up believing in the medium. I’m asking you (Yes YOU) to make a point of not being quiet. I know you’re worried about job security, especially with the economy being what it is.I get it. But you’re paving the way for the kids of tomorrow my friend. Do something drastic. Use your imagination. That’s what it’s there for. Be the change you want to see. Don’t just sit there being thankful you’re not “That Guy”. And if you ARE “That Guy”, I don’t hate you. I know you far too well for that. I understand you. You were most every man I knew as a child. You are that which causes so many of us to doubt ourselves. You are the reason I fought for so long to win the game. Only to realize your game isn’t for me. So enjoy your time while it lasts. Comic Book Society won’t look the same once I’m done here. =) I’m not going to be quiet anymore.

I commented on Brandon’s thread because he was being called out for speaking openly about a misogynistic creator who I knew was misogynistic. I’ve told the story before. This time it just happened to be reposted for a larger audience and has sparked debate. I’m not asking anyone to boycott the creator in question. I just agree that the books leave a bad taste in my mouth when they are touted as being the “breath of feminist fresh air” in comics. Irony= misogynist man making comics for women. It’s funny. It’s sad. And don’t you dare call out Brandon or anyone else for speaking truth.

I’m being asked a lot of questions. So here are more answers: Why didn’t I take to social media immediately? I was afraid of being THAT GIRL I’d been warned it was my responsibility to watch my own back. And I believed it. Why am I willing to talk about it now? Because a MAN in the industry spoke his name first, and was attacked for it. Every time I have talked about it to any of my followers I never revealed his name. Brandon’s tweets made me think twice. Especially now that I am independent. Again, I don’t hate said creator. I never did. It made me feel dehumanized at the time. Even worse was his half hearted apology AFTER giving me a ration of shit, and only because I requested it.

Is he a good writer? Of course. Does it make me ill when I see a book of his on the shelf? Indeed. But look at it this way. He is a part of what I had to overcome to find my true path. I’m who I am in part because one of my heroes pretended to like me and tried to trick me into the sack. It took me years to figure out why that situation made me so upset. My art, for me, is pure. Yes I know I sound crazy. I was young, naive, and got hit on a lot. But to use my work and my hopes for a career against me? That shit left a mark. I didn’t have anyone to look up to as a shining example of how to handle those situations. I knew how to deal with regular guys making passes or being weird. But a man I respected, who worked in the magical industry I thought was full of rebels and freaks like me? The fact that he went out of his way to let me know he thought I was talented and then when he met me and hunted me, and then wrote his room number ON A PIECE OF MY ART? It still burns, people. I’m allowed to be mad. I’m allowed to talk about it. No matter when it happened. Talking about it is healing. I was hoping to defend a creator by telling my truth. I tripped and found some really awesome folks who fight their own good fights daily.

For those worried about him hurting me: He can’t. I’m in my own sandbox, and he’s just some comics guy. What’s he going to do? Tell his friends not to hire me? I’m nobody to him. He made sure to let me know that I was supposed to be grateful for his attention. That I was nothing. He claimed he wanted us to be cool afterwards. I actually tried (oh the stupidity of youth). But he promptly ignored me after that. I picked up. I moved on. I grew up. I met many more of his kind. I got stronger, quicker, bigger and meaner. Now I’m Brienne instead of Book 1 Sansa. I am the subject of 4Chan threads now. But not only do I have sensible defenders there…the first comments were about how they don’t care what I said because they love my art. Then they shared my art. Repeatedly. #mustbedoingsomethingright

No. I don’t hate the creator in question. I just think he’s an asshole. I’m NOT the only woman he’s done this to. But that doesn’t mean I’m asking you to boycott him. If you enjoy his books, more power to you. I don’t. Because he is using women in the industry and female characters as tools for his own gain. He’s a faux feminist. And he smells like butt. And his mama dresses him funny. 🙂

Okay, I might have some minor resentment about his track record of female abuse.

Dude. Come on. I’m a free agent. I make comics about a monster, a kid and a drunk cat that are about gender spectrums, old people and muffins. No one can touch me. I’m so far out in left field I can’t even see the stands.

In response to where to find more of my work: My FB pages are where most folks hang out to catch the progress shots and such. But be warned, I post a lot of photos of my cat the “Hellbeast” on my profile. The fan page is an easier way to get JUST art. And random posts from ladies dressed as one of my older art pieces. Which is also super nifty. The Porkchop Army refers to my fans on the main FB page mostly. Apocalypse Princess Army is for the girls dressed as that art piece. Main page is known for being a safe ground for all. Issues of gender spectrum, sexuality, politics, race and religion are open to discuss so long as it’s civil and without malice. I do intervene and ban if anyone gets out of hand. I am the bouncer. 🙂 If you play nice it can be a fun spot to debate the weightier issues, and gain some insight. All are welcome.