We’d touched on this briefly before, but in addition to announcing who is voicing Thanos in their movies, Marvel has given some details on September’s issues of “Avengers” and “New Avengers.”

In an intertwined arc being referred to as ‘Time Runs Out,’ it appears that the post-“Original Sin” landscape will see both titles from Hickman jumping ahead eight months into the future. All of the New Avengers’ efforts to battle the Incursions (see: “New Avengers,” because it’s too hard to explain) have been revealed, and with that cat out of the bag we’re left for some cataclysmic changes. “Avengers” itself is doing a bit of time hopping right now as is, so this looks to be a massive extension of that.

So what are the changes? Well, first and foremost, Thanos and his Black Guard from “Infinity” will be taking over as the “New Avengers,” with artist Mike Deodato taking over the series post-“Original Sin.” Thanos had been put in a form of stasis at the end of “Infinity,” and was last really mentioned in the pages of “New Avengers,” so apparently he gets out and gets his gang back together to deal with the Incurions. Here’s what that team looks like: 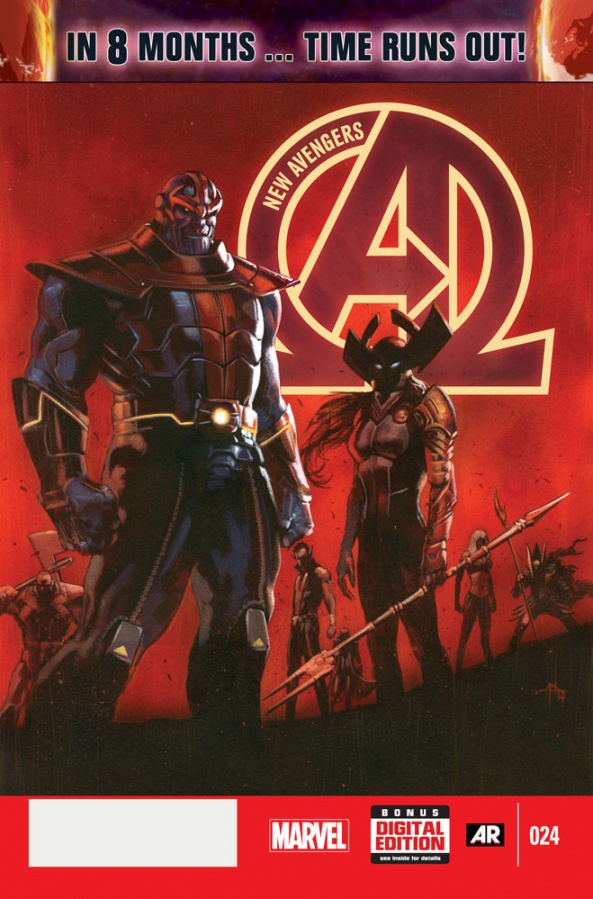 Over in “Avengers,” the book will now be illustrated by Jim Cheung (hooray!) with a new mysterious line-up of Avengers, which is slightly unclear but appears to have the Hulk, the recent 48-Years-In-The-Future Captain America, what could be Steve Rogers without the Super Soldier Serum (maybe?), Havok and Thor with Jarnbjorn over Mjolnir at the very least. This, in turn, appears to be an extension of “Uncanny Avengers,” which up to this point is a team that only one other Marvel book had ever acknowledged. Rick Remender is also in charge of Marvel’s September event “Axis,” so that could have something to do with it. Take a look: 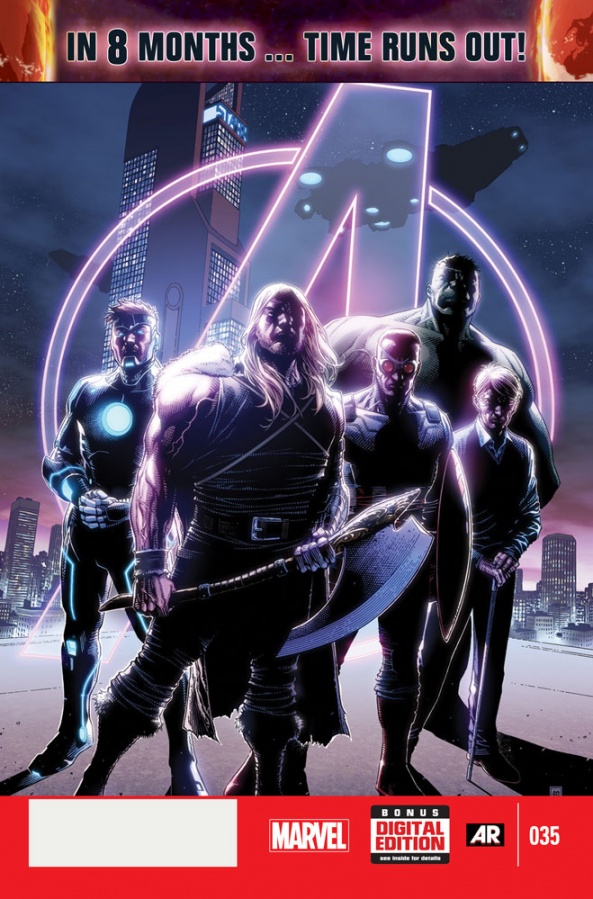 All of this leads to something big in May 2015, which is probably the proverbial time running out.

There’s been a lot of emphasis in the Marvel books post-“Age of Ultron” that something in the timeline/continuity of Marvel’s Universe is messed up, due to all the time-foolery from that event. It’s quite possible that this will set the record straight — or even just straight-up start things over from scratch, which was a rumor coming out of the recent Diamond Retailer Summit. The Incursions, after all, feature similar red skies to another form of crisis at the Distinguished Competition, and “New Avengers” did just feature a very Justice League-y team in the books. While Marvel has been becoming known for their indie-ization, they’re certainly making a striking amount of DC-esque moves.

Marvel emphasizes that this isn’t a parallel universe story or anything of that sort, and it all seems very dire. If they’re getting ready for some big Universe-ending/New 52-esque reboot, you can bet your boots that there will be sass from fans for months to come, while others actively praise Hickman’s ability to write long con storylines.

For the full press release from Marvel, please see below.

This September, leap into tomorrow as the Marvel Universe fast forwards 8 months in AVENGERS #35 and NEW AVENGERS #24! All-Star artists Jim Cheung & Mike Deodato join New York Times Bestselling writer Jonathan Hickman for two oversized issues taking readers to the battle-worn Marvel Universe of tomorrow. But how could this all happen?

The Incursions by parallel Earths from other dimensions have increased in number! To save both universes, each time one Earth must be destroyed! Up until now, the Illuminati has dealt with this problem in secret! But 8 months from now, who is left to shoulder this burden—and is the entirety of the Marvel Universe itself doomed?

“After the cataclysmic events of the Avengers Original Sin tie-in, and the revelation as to what the Illuminati has been up to all this time, we jump the storyline ahead 8 months in both AVENGERS #35 and NEW AVENGERS #24 – to the moment that time runs out for everybody!” said Executive Editor Tom Brevoort, in an exclusive interview with Marvel.com. “So in addition to setting the table for the astonishing climax of Jonathan Hickman’s run, we’ll also be providing a glimpse into the immediate future of many of our characters, and what changes await them over the next 8 months of publishing. This isn’t some maybe-future, this is the real deal, what’s awaiting the Marvel Universe in the coming year.”

As these two epic issues jump forward into the future, what has become of Earth’s Mightiest Heroes? With the war between the Avengers and the Illuminati at its peak, who will be left to fend off the Final Incursion? Who are the new Cabal? And…what is coming in May 2015? The clock is ticking and your questions will be answered this September in AVENGERS #35 and NEW AVENGERS #24!