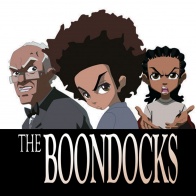 HYPEBEAST reports that radio host Charlamagne tha God has published new strips of “The Boondocks” on Instagram. The new strips were made by creator Aaron McGruder and the animated series’ former animator Seung Kim, and focus on current events like President Donald Trump, the #MuteRKelly movement, as well as news network MSNBC.

Alongside Charlamagnes’s posts, McGruder released a statement explaining, “Did these for fun (and to see if I still could). More to come… exactly how much more is tough to say. These strips were only possible due to the enormous talent of my good friend Seung Kim, who did the animation for the old show – and he’s a busy guy. Thanks to him and thanks to Charlamagne for putting these out for me while I get my instagram act together.”

“The Boondocks” was a syndicated comic strip that ran from 1996 to 2006. It was adapted into an adult animated series that aired on Cartoon Network’s Adult Swim block from November 6, 2005 to June 23, 2014. The series follows the Freemans, a dysfunctional black family, as they settle into the fictional, friendly and predominantly white suburb of Woodcrest. The series would regularly provide commentary on American politics through an African American point of view and regularly featured well known singers, rappers, and public figures in black culture, while also using parodies of several others. To see more of “The Boondocks,” be sure to check out Charlamagne tha God’s Instagram.