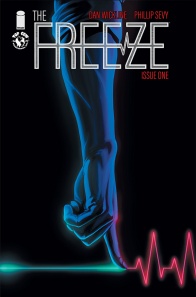 The story follows Ryan, the “one decent person” left unfrozen in the world following a mysterious global event. In addition to being unfrozen, Ryan also has the ability to unfreeze the rest of the world. With the world’s fate in his hands, Ryan has to try and solve the mystery of the global event and work out how to reverse it, whilst considering whether everyone deserves to be saved.

In a press release for the series, Wickline describes the series as “a post-apocalyptic survival story where the biggest danger is man’s true nature.” For Ryan, the biggest danger in rebuilding society will be having to choose which people to unfreeze, because he doesn’t know whether they “will benefit the new world or indulge their darkest inclinations.”

Sevy said that it was the “the premise and its execution in ‘The Freeze’ is what drew [him] to the project,” and noted that in order to make “great sci-fi,” it has to take “a cool concept and [use] it as a vehicle to examine the choices, attitudes, thoughts, and prejudices we, as people, have.”

“The Freeze” #1 will be released in stores on Wednesday, December 5.