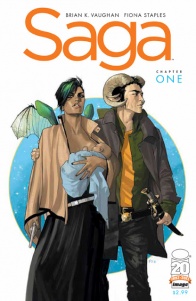 – Fans of Saga who have always wished for a live-action version, creators Fiona Staples and Brian K. Vaughan said they would be interested in a musical adaptation — but only if it was created by Lin-Manuel Miranda. In an interview with the New York Times in 2016, Miranda said that he was a huge fan of Saga and it seems that the creators are as much fans of his work as he is of theirs! “We’ve never spoken with Mr. Miranda, but seeing Hamilton on stage was one of the greatest experiences of my artistic life, and it’s a ridiculous honor to know he reads our work,” Vaughan told Vulture. “I know I said we’re not pursuing adaptations, but if Lin-Manuel ever wants to mount a Saga musical, it’s all his.”

– Marvel Studios have hired film director Jac Schaeffer (Timer) to pen a Black Widow movie. According to Variety, Marvel decided that with no further appearances for the character on the horizon after the next two Avengers films, now was the best time to proceed with the long-mooted spin-off feature. Scarlett Johansson first played Black Widow in 2010’s Iron Man 2, and has reprised the role in the Captain America sequels released between Avengers films.

– The upcoming TV version of Snowpiercer has been given a series commitment by TNT. The series based on Bong Joon Ho’s 2013 film, which in turn was based on Jacques Lob and Jean-Marc Rochette’s 1982 graphic novel “Le Transperceneige,” depicted a frozen post-apocalyptic world where the last humans live on a gigantic train constantly moving around the planet. The show will star Jennifer Connelly and (original Hamilton cast member) Daveed Diggs, and Bong Joon Ho is among the executive producers. The pilot was directed by Scott Derrickson (Doctor Strange) and was written by Josh Friedman (Terminator: The Sarah Connor Chronicles).

– Dark Horse Comics announced Peter Hogan and Steve Parkhouse’s “Resident Alien” will return with a fifth limited series in April. The new book, “Resident Alien: An Alien in New York,” will see Dr. Harry Vanderspeigel, the titular alien who poses as a doctor and moonlights as a detective, come to New York City when a new case catches his eye. The first issue goes on sale April 11.

– Artist Chris Visions announced in a Facebook post that he will be undergoing cornea transplant surgery on January 31 due to blindness in his left eye as a result of Keratoconus. Visions, artist for “Dead Letters” and “Spider-Gwen,” has had the condition since he was in high school, and will need “three weeks to a couple months” recovery time after the operation. As he heals, Visions will do freelance assignments, limited artwork commissions, and plans to give his characters “the nurturing and development they deserve.” The post also contained information on how to donate to help him.

– Marvel Studios’ Black Panther became Fandango‘s best-selling Marvel Cinematic Universe title based on its advance ticket presales in the last 24 hours. According to Deadline, Black Panther takes the title from Captain America: Civil War, a film which ended up securing an opening weekend of $179 million. Actress Lupita Nyong’o, who plays Nakia, even took to Twitter to share her amazement that she was unable to secure tickets to see the film on opening night due to its popularity. Black Panther opens on February 16.

– Political commentator and journalist Chris Hayes has released a comic strip alongside cartoonist Mike Dawson titled “The Good War: How America’s Infatuation with World War II Has Eroded Our Conscience.” The comic is an updated adaptation of Hayes’ piece “The Good War on Terror” which was published in 2006, and deals with ideas of nationalism, militarism, and World War II sentimentality seen in entertainment in the 90’s and its effects on the Iraq War, the American public, and politics.

– The final season of Star Wars Rebels will resume on February 24 and, according to the episode’s description, may mean the end for one of the Ghost crew. The description reads: “the Ghost Crew infiltrates the Imperial headquarters on Lothal to save one of their own”. But the following episode is described as: “Reeling from a devastating loss, the Ghost crew rallies together to find a new purpose and resolve”. Star Wars Rebels will return with its mid-season premiere on February 24 on Disney XD.

– Marvel and DC will battle it out for best dressed as the nominees were announced for the 20th annual Costume Designers Guild Awards on Wednesday. Mayes C. Rubeo of Thor: Ragnarok and Lindy Hemming of Wonder Woman are nominated for Excellence in Sci-Fi/Fantasy Film alongside other films like Star Wars: The Last Jedi, Blade Runner 2049, and Beauty and the Beast. Winners of the awards will be revealed on February 20.

– The first trailer for the upcoming Teen Titans Go! To the Movies has been released and can be viewed on the Warner Bros. Pictures YouTube channel. The film, which calls itself the “super hero movie to end all super hero movies hopefully,” will be in theaters on July 27.

– Thor: Ragnarok will be available on February 20 for digital download, with DVD and Blu-ray release coming out on March 6.

Emlyn Travis is a journalist with a huge love of comics, k-dramas and terrible puns. She can recite Captain America: The Winter Soldier almost verbatim and thinks that Bucky Barnes gets a bad rap.