Welcome back to The Rundown, our daily breakdown of comic news stories we missed from the previous day. Have a link to share? Email our team at rundown@multiversitycomics.com. 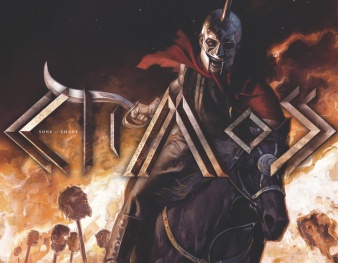 – IDW announced a new OGN, called “Sons of Chaos,” written by writer/director/actor/producer/musician (but first time comic-writer) Chris Jaymes and illustrated by Alejandro Aragon (“Overlook,” “Northlanders”). The 192-page oversized hardcover tells a story during the Greek War of Independence about Marcos Botsaris, “a child raised within the dungeons of an Ottoman Pasha, [who] escapes captivity, falls in love, and fiercely leads Greece to bloody revolution.” The graphic novel will be available in June 2019.

– Vault Comics announced “Heathen” will return for a new six-issue arc with issue #7 this June. Creator/writer Natasha Alterici will be passing on illustration duties to Ashley A. Woods (“Ladycastle,” “Tomb Raider: The Survivor’s Crusade”) with issue #9, to help keep the title on schedule after she was struck by hand pain.

– Diamond has revealed their top selling comics of 2018. Predictably, “Action Comics” #1000 topped the best-selling single issue list, while Marvel’s “Infinity Gauntlet” collection lead the graphic novels and collections list. The rest of the single issue list is filled with Big Two event issues and debuts like “Amazing Spider-Man” #800, “Batman” #50, and “Fantastic Four” #1. The collections list had a bit more variety with multiple volumes of “Saga”, and other Image books like “Paper Girls” and “Monstress” making the cut as well.

– Dark Horse Comics announced a new, “definitive” hardcover collection of J.M. DeMatteis, Jon J. Muth, George Pratt, and Kent Williams’s “Moonshadow.” The limited series was originally published from 1985-1987 by Marvel’s Epic imprint and was the first fully painted American comic book. The new edition will be available in June 2019, and includes a new introduction by DeMatteis as well as a bonus section featuring early concept art.

– Washington Post and New York Times critic and author Bijan C. Bayne is working on a comic with Jamal Igle and Joseph P. Illidge, and illustrated by Brazillian artist Juliana Moon. “SuperHuman” centers on Trixie Grace, who has been “trying (since birth) to master the fact she can hear conversations from other rooms–and sometimes other buildings.”

– Amazon Studios will be developing an hour-long drama based on Michael Avon Oeming and Dan Berman’s OGN, “Six.” The adaptation will be called Thirteen, and will be written by Stefan Jaworski (Those Who Kill) and directed by Michael Dinner (Justified). The story follows an alien as she comes to Earth to track down 12 alien defectors, and ends up succumbing to the same human emotions that caused the others to stay on our world.

– Michelle Yeoh will be leading a Star Trek: Discovery spin-off series for her character, Captain Philippa Georgiou. The new series will be spearheaded by co-EPs Bo Yeon Kim and Erika Lippoldt and will follow the Starfleet’s Section 31 division. The show is still in the very early stages, and Yeoh will still appear in future seasons of Discovery as well.

– Fox has secured a release in China for Deadpool 2, using the PG-13 “reimagining” of the R-rated film that debuted in the states as Once Upon a Deadpool, and saw Ryan Reynold’s Wade Wilson recount the original film to Fred Savage in a riff on The Princess Bride. The Mandarin-translated title of this version is Deadpool: I Love My Home. Neither Deadpool or Deadpool 2 were released in the heavily censored and strict Chinese market.

– BOOM! will be collecting Ryan North, Shelli Paroline, and Braden Lambentire’s entire 2013 limited series, “The Midas Flesh,” in a new softcover re-titled as just “Midas.” The new collection will be available in May 2019.

– First Second’s last cover reveal/announcement for their Fall 2019 schedule is “Kitten Construction Company: A Bridge Too Fur,” the latest in John Patrick Green’s all-ages series. It will be released in October 2019.