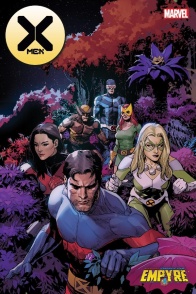 – Marvel has revealed that the X-Men will tie into the Avengers and Fantastic Four-focused crossover event ‘Empyre.’ “X-Men” #10, written by Jonathan Hickman with art by Leinil Francis Yu, will see the two stories woven together. The issue will likely show members of the Kree or the Skrulls moving in on Krakoan territory, given the focus of the Kree-Skrull War that “Empyre” is focused on. The issue is set to release in April.

– Marvel also announced a new series, titled “iWolverine,” that spins out of the newly begun ‘Iron Man 2020’ event. The title was announced in a checklist inside “Iron Man 2020” #1, released this Wednesday. No release date or plot details have been released about the upcoming series.

– 101 Studios have acquired the US rights to Nicolas Bedos’s La Belle Epoque, a French romantic comedy. The film follows Victor, a cartoonist who loses his job and is offered an opportunity to travel back in time to the day he met his wife using VR, where he finds himself falling for the actress who is playing the younger version of his wife. The film premiered at Cannes Film Festival last year, and is slated for a US release in the spring.

– Knopf Books for Young Readers have announced the release of an anthology titled, “Noisemakers: 25 Women Who Raised Their Voices & Changed the World.” It’s the first book from Kazoo, a quarterly print magazine for young girls aged 5 to 12, and features comics by the publisher’s most acclaimed cartoonists, including Emil Ferris, Rosemary Valero-O’Connell, Alitha E. Martinez, and many more. The book is targeted for girls between the ages of 5 and 12, but the high-level art and stories included in the book open it to a wider audience. “Noisemakers” features over 200 pages of inspirational storytelling and releases on February 4, 2020.

– The official trailer for Glenn Danzig’s anthology film Verotika appeared online. The film is inspired by Danzig’s “Verotik” comics, and is set to release on video-on-demand platforms on February 25, with the Blu-ray release set for March 3.

– HBO’s programming president, Casey Bloys, offered his take on a potential second season of Watchmen, stating that the future of the show lies in Damon Lindelof’s vision, as the series would be unlikely to continue without him. “Originally, my hope was it would have been an ongoing series, but where Damon is thinking about it, I think maybe it’s more like a Fargo, where it comes back completely different,” he said.

– TNT’s new Snowpiercer series got a premiere date and new trailer. The series will premiere on Sunday, May 31st at 9/8c. The series is based on Jaques Lob and Jean-Marc Rochette’s “Le Trasperceneige,” and will star Daveed Diggs, Jennifer Connelly, Sean Bean, Rowan Blanchard, Mickey Sumner, and Alison Wright. Snowpiercer was showrun by Orphan Black co-creator Graeme Manson.

– Finally, HBO Max have announced a three-part animated mini-series titled Aquaman: King of Atlantis, produced by Aquaman director James Wan. The series will follow Aquaman after he takes his throne and discovers the difficulty that comes with being in charge. Victor Courtright (Thundercats Roar!) and Marly Halpern-Graser (Batman vs. Teenage Mutant  Ninja Turtles) will act as showrunners and co-executive producers.

Welcome back to The Rundown, our daily breakdown on comic news stories we missed from the previous day. Have a link to share? Email our team at rundown@multiversitycomics.com.In case you missed it, we had the sad news that Nicola “Nick” Cuti, the co-creator of E-Man, died at age 75. We also had an exclusive preview […]

Welcome back to The Rundown, our daily breakdown on comic news stories we missed from the previous day. Have a link to share? Email our team at rundown@multiversitycomics.com.In case you missed it, Dark Horse announced “You Look Like Death,” Oni Press announced “Jonna and the Unpossible Monsters,” and IDW and DC announced a ‘Sandman Universe’ […]