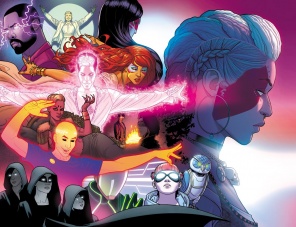 The Wicked + The Divine #34
#WeBelieve variant

– Image has announced an initiative titled We Believe in Artists, to honor the artists who make comics possible. This will be the first of many of Image’s #WeBelieve 2018 campaign which is focused on highlighting the talent and aspects of the comic industry that often go unseen or unacknowledged. The publisher will launch fourteen “virgin” wraparound covers – designed as art-only with no writing at all – in March to celebrate the importance of art in comics as a primarily visual medium of storytelling.

– Marvel’s Black Panther is predicted to pull in between $100 million and, according to some sources, $150 million at the North American box office during opening weekend beginning February 16. Black Panther will be the first tentpole Marvel film of 2018 and could also top the opening charts of any 2018 movie release thus far. It is still uncertain how much it could pull in, but $100 million, at this point, is guaranteed.

– Flame Con, the world’s largest queer comic con, has announced its fourth annual expo on August 18–19. Due to increased turnout last year, Flame Con has moved venues to the Sheraton New York Times Square Hotel. The Geeks OUT-created expo is designed to give the entire LGBTQ community the chance to experience meaningful and provocative art that reflects themselves. The convention will host creators Sina Grace (“Iceman”), Tee Franklin (“Bingo Love”), Jen Bartel (“Jem and The Holograms”), and more.

– Fox released a promotional trailer for the latter half of Gotham’s fourth season. The trailer provides a teasing look at an incarcerated Jerome, played by Cameron Monaghan, laughing sinisterly with the Penguin, played by Robin Lord Taylor. We also catch a glimpse of the pensive young Bruce looking at the bat-shaped mask, perhaps hinting at a turning point in his devil-may-care, playboy antics. The season starts up again on March 1.

– Concern has been ramping up over Times of India’s serialized comic hero, Agent Rana, whose exaggerated masculinity and overly sexual exploits have disturbed many parents. But what has been garnering more critical attention is the cartoon strip’s casual and frequent depiction of sexual violence against women and an anti-Muslim message. The primary criticism has been that sexual violence against women is used as a crude plot device without regard to the grave nature of the subject matter.

– Kevin J. Anderson, co-author of Clockwork Lives with Rush drummer Neil Peart, has announced that their New York Times bestselling novel is officially being adapted into a graphic novel by Insight Editions. The book cover will be designed by long-time Rush album cover artist Hugh Syme. Insight’s Executive Editor, Mark Irwin, says he looks forward to the steampunk world moving into the comics medium. “Clockwork Lives: The Graphic Novel” is set to release on June 19, 2018.

– DC Comics’s “Doomsday Clock” #4 has been pushed back to a release date of March 28, one month later than its intended release. This delay comes in lieu of the shift from a monthly release to a bimonthly release. Given the delays, the series is slated to run until July 2019. The series is set one year in the future, but it has not been announced yet whether the series’s delays will affect the release of other DC titles.

– DC Comics has also announced that “Batman: Creature of the Night” #3 will be delayed until March 28, a month later than planned. Though announced as a four-issue series, the final issue did not appear in solicitations for either March or April.

Jonathan is a professional editor by day and writes fiction, comics news, and music. He spend a disproportionate amount of time rock climbing and is partial to slice-of-life and non-superpowered comics.