In case you missed it, Cullen Bunn and Cat Farris are bringing you a new OGN “The Ghoul Next Door,” plus we have an exclusive preview of Marvel’s “Old Man Quill” #1. 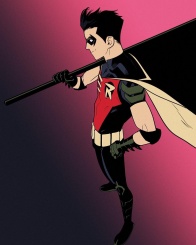 – Longtime Marvel artist, Kris Anka, will be joining Brian Michael Bendis on May’s “Young Justice” #5. The announcement has been teased by Anka, with a number of Robin sketches he has been posting on his Twitter account. This isn’t the first time Anka has worked with Bendis, they worked together back in 2014 on “Uncanny X-Men.” Anka has worked for Marvel since 2013, and confirmed that after this month’s “Runaways” #18, he would stop doing interiors, although he will continue doing covers for the series.

– Titan Comics announced an English translation of Fanbien Nury and Bruno’s “Atar Gull” will be hitting stores July 24. The 96-page hardcover comic, based on the novel by Eugene Sue, tells the story of Atar Gull, a slave seeking revenge against the men who captured and sold him.

– Robert Kirkman’s (“The Walking Dead”) first Amazon series will be an animated drama based on his work, “Invincible.” Steven Yuen, who played Glen in The Walking Dead, will lead a star-studded cast that also includes J.K. Simmons (Counterpart), Sandra Oh (Killing Eve), Seth Rogen (The Disaster Artist), and Mark Hamill (Star Wars). The eight hour-long episodes will revolve around Mark Grayson (Yuen), an average teen whose father is the most powerful superhero on the planet, but after he starts to get powers of his own, truths start to unravel about his father’s past heroics. The series, which will premiere in 2020, will be produced by Kirkman’s Skybound Entertainment, and will have Simon Racioppa as showrunner. The Hollywood Reporter has a full list of the cast.

– As well as Marvel’s “Star Wars: Galaxy’s Edge” miniseries, written by Ethan Sacks (“Old Man Hawkeye”) with art by Will Sliney (“Solo: A Star Wars Story”), Lucasfilm has announced more tie-in books for the Disney attraction, including a kids’ comic from IDW Publishing this fall. StarWars.com has more.

– The CW have handed out early renewals for its 2019-2020 timetable. Comic book shows DC’s Legends of Tomorrow, The Flash, Arrow, Black Lighting, Supergirl and Riverdale have all been renewed. The renewal came from CW president, Mark Pedowitz. Pedowitz also announced the network had ended its investigation into allegations about Black Lightning showrunner Salim Akil, and “found that not a ‘single person’ on the series had issues or complaints to make known on [him]… He had a personal issue that is nothing to do with the show. The show, as far as we’re concerned, is that Salim, the other producers, the cast and the crew, they deserve to work.”

– According to Deadline, “Dog Man,” the popular children’s book series written by author Dav Pilkey (who also wrote Captain Underpants), is getting a musical. Dog Man: The Musicial will be written by Emmy Award winners, Kevin Del Aguila and Brad Alexander, and will feature direction by Jen Wineman. TheatreWorks USA have joined with Writers House and Scholastic to adapt the bestseller for stage. The world premiere will be at the Off-Broadway Lucille Lortel Theatre, and it will run from June 28 to August 4.

– According to Ball State Daily News, PAWS, Inc, the production company owned by “Garfield” creator Jim Davis, will be closing the doors of their headquarters in Albany, Indiana. The employees will be working from home instead. Public relations employee Kim Campbell Beasley told Star Press that the brand “is still alive and well,” as the company have some major projects line up, including a new movie and TV show. Beasley commented on the closer, stating, “it just became obvious that we did not need that facility to conduct business. When you have a 35,000 square foot building and just a handful of people in it, it becomes fairly evident that maybe something is wrong with this picture.” Jim Davis himself plans to stay in Indiana.

– The Walking Dead midseason debut episode “Adaptation” will premiere a week early on February 3, exclusively for AMC Premiere subscribers. The episode will be available all week leading up to the midseason return on February 10.

– Vanity Fair magazine did a list celebrating the 25 most influential film scenes of the last 25 years: both Iron Man and The Dark Knight made the list, and were accompanied by comments from Samuel L. Jackson and Hans Zimmer. Read the full list here.

– Finally, comic book website The Outhouse is closing down. Owner Robert Morris announced in a post on the site, “Unfortunately, though, all good things must come to an end. It has come to a point where the simple act of keeping the website afloat is no longer a possibility. The rumors are true, I’m afraid. The Outhouse will be going down for the last time on Friday, February 8th, 2019. On behalf of the Outhouse staff and extended family, I’d love for everyone reading this to know just how much we appreciate your support and friendship over the last decade and a half. We’d love to have you reminisce with us as we wind things down over the next week, and celebrate all the good memories we’ll all treasure forever.”