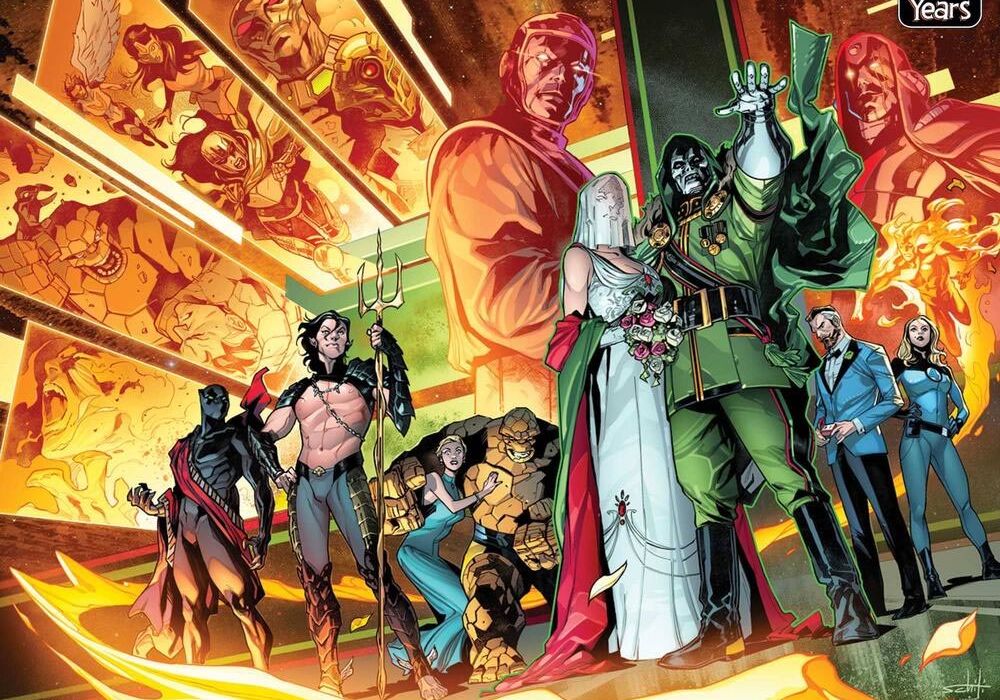 In case you missed it, Marvel’s Reptil is starring in a solo miniseries; Mike Mignola, Chris Roberson, and Leila del Duca are expanding the “Hellboy” universe with “The House of Lost Horizons: A Sarah Jewel Mystery;” and comic/TV writer Si Spencer passed away at the age of 60. 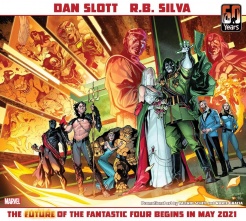 – The Fantastic Four will celebrate their 60th anniversary this year, and Marvel previewed what’s in store for its first family with a special teaser image. The image by Valerio Schiti and Marti Gracia hints at the upcoming story arc by writer Dan Slott and artist R.B. Silva, with what appears to be the wedding of Doctor Doom, attended by Namor and Black Panther. Villains Kang the Conqueror and Ronan the Accuser both appear in the image as well. The anniversary story arc, titled ‘Bride of Doom,’ kicks off this May in “Fantastic Four” #32.

– Before The Predator appears in all new stories from Marvel later this year, the galaxy’s most fearsome hunter will take on the heroes of the 616 in a series of variant covers. Starting with May 5’s “Amazing Spider-Man” #65, and ending with May 26’s “Miles Morales: Spider-Man” #26, six covers will depict the creature doing battle with everyone from the Guardians of the Galaxy to the Fantastic Four. Artists ranging from Mattia de Iulis to Superlog have been tapped to produce these variants.

– “Demon Slayer: Kimetsu no Yaiba” creator Koyoharu Gotouge has been included in Time magazine’s 2021 Time 100 Next. The notoriously private writer/artist is honored by the magazine for not only their work on the manga, which ran in Weekly Shonen Jump from 2016 to 2020, but also the record-breaking animated film based on it. Demon Slayer: Kimetsu no Yaiba the Movie: Mugen Train grossed a total of $313 million, gaining not only the biggest opening weekend of all time, but also making it the highest-grossing film in the history of Japanese cinema; an accolade previously held by Hayao Miyazaki’s Spirited Away.

– BOOM! Studios’ “WYND” returns this May with issue #6. Writer James Tynion IV, artist Michael Dialynas, and letterer AndWorld Design all return for this new chapter in the journey of Wynd, Oakley, Thorn, and Yorik. This new story arc will explore the truth behind Wynd’s visions, and sees King Yossar turn to Vampyres in an attempt to bring Yorik home. The first arc of “Wynd” (which was originally intended as a graphic novel trilogy) concluded in October, and will also be collected in May in “Wynd Book One: The Flight of the Prince.”

– Dark Horse has announced a two-part miniseries based on Fox/Hulu series The Orville. Taking place in an alternate timeline, ”The Orville #1: Digressions Part 1 and 2” is written by series executive producer David A. Goodman, with art by David Cabeza and colors by Michael Atiyeh. In this reality, Ed, Kelly, and the rest of the crew never board the titular ship, though the threat of the Kaylon still looms. “The Orville #1: Digressions Part 1 and 2” goes on sale May 5, but is available for preorder now.

– New Line Cinema’s Black Adam has cast Marwan Kenzari (Aladdin, The Old Guard) in an as-of-yet unrevealed role. Kenzari joins a cast that includes Dwayne “The Rock” Johnson as the title antihero, and Noah Centineo, Aldis Hodge, and Quintessa Swindell as members of the Justice Society of America (Atom Smasher, Hawkman, and Cyclone respectively). Jaume Collet-Serra, who worked with Johnson previously on Jungle Cruise, will direct the film, which begins shooting later this year.

– Netflix has ordered Tim Burton’s new live-action Addams Family series, an an eight-part spin-off starring Addams daughter Wednesday. The series, which will be directed by Burton and written by Smallville creators Al Gough and Miles Millar, will follow Wednesday Addams as she solves mysteries at the mysterious Nevermore Academy school. Wednesday will be the first live-action TV series from Burton, and the first solo series for the character.

– Lastly, J.J. Abrams’s production company Bad Robot is developing a new Constantine series for HBO Max. Guy Bolton will write the series, reportedly having already finished the pilot script with hopes to open a writers room in March. The tone is said to be darker than other interpretations, focusing on a younger John Constantine living in London. The new series will not feature Matt Ryan, who portrayed the character in the 2014 series and continues to do so in Legends of Tomorrow as well as various animated projects, instead choosing to cast a more diverse lead. 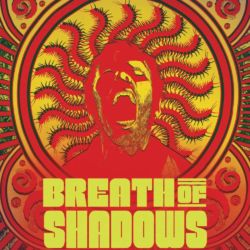 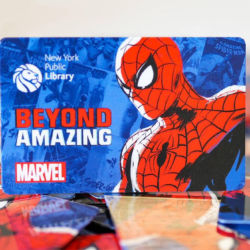 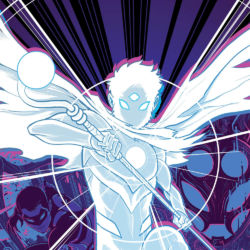