In case you missed it, Marvel revealed new details about the upcoming UK-based superhero team, “The Union,” and Dark Horse announced a comic book adaptation of the original Predator screenplay. We also have an exclusive preview of “Shazam” #11 and an interview with Amy Reeder on “Amethyst” ahead of its release next week. 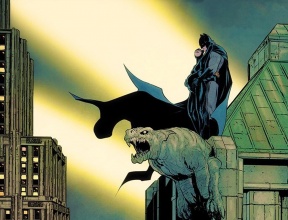 – Tom King tweeted art from Mikel Janín and Jordie Bellaire of a pregnant Catwoman being held by Batman on the roof of a building in Gotham. The image seems likely to be from the upcoming short story from the creative team in April’s “Catwoman 80th Anniversary 100-Page Super Spectacular,” which may be a teaser for King’s upcoming “Batman/Catwoman” series with Clay Mann.

– Adventures in Poor Taste have a first look at “Empyre: X-Men,” a miniseries debuting in May by current X-writers, including Jonathan Hickman and Tini Howard on the first issue, and Gerry Duggan, Benjamin Percy, and Leah Williams on the second. Art will be handled by Matteo Buffagani in the first issue and Lucas Werneck in the second. The four-issue miniseries ties into the ‘Empyre’ event.

– In film and TV news, USA Today has an exclusive first look at the new Netflix movie Extraction starring Chris Hemsworth. The film is an adaptation of the Oni Press graphic novel, “Ciudad,” created by the Russo Brothers, Ande Park, and Fernando Leon Gonzalez. The story centers on a mercenary who is hired to save the kidnapped son of an international crime lord. Extraction will be available to stream on Netflix April 24.

– The Portland Press Herald reports that cartoon strip “Big Nate,” created by Portland native Lincoln Peirce, will be receiving an animated television adaptation on Nickelodeon. Peirce will serve as a consultant on the show, which been ordered for 26 episodes in its the first season. “Big Nate” began in 1991 and tells the coming-of-age story of sixth grader Nate. There is currently no scheduled air date.

– Playbill writes that Kristen and Bobby Lopez will be working on a movie musical adaptation of the graphic novel “The Prince and the Dressmaker” by Jen Wang. The duo are collaborating with Marc Platt and Amy Herzog for the film. The Lopezes have previously worked on Frozen, Coco, and Frozen 2.

– In gaming news, Marvel.com writes that the Fantastic Four will be playable characters in the Nintendo Switch game Marvel Ultimate Alliance 3: The Black Order, in the newly announced “Fantastic Four: Shadow of Doom” DLC pack. Players can play Mister Fantastic, the Invisible Woman, the Thing and the Human Torch as they take on Doctor Doom. The DLC will be available for $19.99 on March 26.

– i09 reported on the new card-based board game Marvel Villainous, following the previous iteration Disney Villainous. Three of the game’s five villains were revealed to be Hela, Thanos, and Ultron. The game pits players against one another with the hope of being the first villain to complete their evil task. The game will be available in August.

– Finally, Newsarama reports that Batman Ninja, the 2018 animated film, is getting a live stage adaptation in Tokyo’s Theatre Moliere Shinjuku from October 10 through December 31. The film is heavily influenced by anime tropes and takes place in Feudal Japan, centering on the Dark Knight as he takes on the Joker.

Welcome back to The Rundown, our daily breakdown on comic news stories we missed from the previous day. Have a link to share? Email our team at rundown@multiversitycomics.com.In case you missed it, we interviewed Adam Wallenta about his book “Punk Taco.”– Following the success of their first livestreamed reading of the first chapters of “The […]