In case you missed it, Netflix’s Luke Cage set a season two release date and dropped a new trailer, Marvel announced new “The Sentry” and “Deadpool” titles for their “Fresh Start,” and Little Women-inspired webcomic “Meg, Jo, Beth, and Amy” is set to start today. 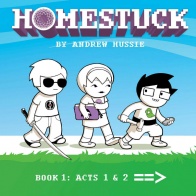 – Viz Media announced the first details on their print and digital release of Andrew Hussie’s “Homestuck.” “Homestuck: Book 1,” which contains act one and two of the story as well as special commentary, will release on April 13. Future volumes will release on a quarterly basis.

– Bleeding Cool reports that even more comics creators have expressed concern over Stan Lee’s current situation, in which Lee’s caretakers have pushed out his manager, Max Anderson, and isolated the comics legend within his home. In the article, artist/writer Neal Adams suggests the LAPD should investigate.

– Also from Bleeding Cool come reports that Valiant Entertainment’s Vice President of Marketing and Communications, Hunter Gorinson, has chosen to leave the company. Gorinson joins a number of other Valiant staff, including CEO Dinesh Shamdasani, who have left the company after this year’s buyout by DMG Entertainment.

– Actor Jack Quaid (The Hunger Games) will play Wee Hughie in Amazon’s adaptation of Garth Ennis and Darick Robertson’s “The Boys,” according to Deadline. No word on whether Quaid has the blessing of the original Wee Hughie.

– Pepe the Frog artist Matt Furie’s campaign to take his “peaceful frog-dude” back from the alt-right has finally reached California federal court. According to The Hollywood Reporter, Furie filed an official copyright infringement lawsuit against Alex Jones’s InfoWars, specifically citing the unauthorized sale of an InfoWars poster including Pepe.

– Vice prompted creators Ryan North, Mimi Pond, Brandon Graham, Fiona Staples, and R. Sikoryak to reflect on the highs and lows of their time in the comics industry.

– The Avengers: Infinity War board game will let you team the Avengers and the Guardians of the Galaxy to stop Thanos from acquiring the Infinity Stones. Entertainment Weekly has the details, including pictures of in-game setup and the game’s detailed sculpt of Josh Brolin’s Thanos.

– ON Animation Studios and Hyrum Osmond, head of animation on Moana, are partnering to bring “Little Nemo in Slumberland” to the screen as an animated feature, reports Variety. ON Animation is the studio behind 2015’s animated take on The Little Prince.